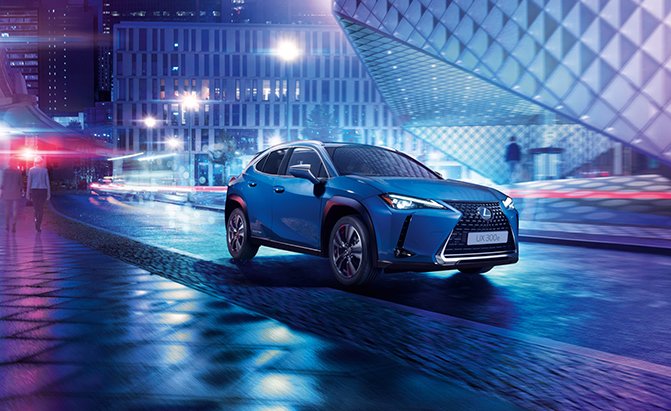 First Lexus teased us with the out-there LF-30 concept last month. Now its first all-electric model is here: the UX300e.

Actually, it isn’t quite “here”—and not just because it hasn’t actually launched yet. This little battery-powered crossover won’t be coming to America, instead sticking to China and Europe for its initial 2020 roll-out, before hitting Japan in 2021.

Nonetheless, as the beginning of what the Japanese brand calls “Lexus Electrified”, the UX300e is an important signal of what’s to come. Judged on that aspect, it’s quite… . There’s little outside to tell this apart from the regular UX: the hourglass grille is the same; the rear end, complete with those unique, three-dimensional taillights, is the same; the faux-off-roader body cladding is the same. Only a small “electric” badge along the rear doors and the unique wheel design marks this out as the plug-in. Sneak a peek underneath and a new underbody cover might be hard to miss too, we suppose.

Nestled underneath the floor is a 54.3 kWh lithium-ion battery pack. It connects to a front-mounted motor capable of 201 hp and 221 lb-ft of torque. That out-flexes the existing UX250h, though the 300e sends all its power through the front wheels alone.

Lexus quotes a range of 248 miles on the older NEDC test cycle, which is typically more optimistic than the newer WLTP standards. The UX300e will be capable of DC fast-charging up to 50 kW however, meaning a full charge will take a little over an hour. The standard AC rate is 6.6 kW, which translates to around eight hours from empty.

The interior features a new shifter design, operating via shift-by-wire system. Paddle shifters have sprouted up behind the wheel too, allowing drivers to select up to four levels of brake regeneration. It’s a system we’ve seen elsewhere in the Toyota empire, on the recently revealed RAV4 Prime plug-in hybrid.

Sales begin next year in China and Europe. While the UX300e won’t be coming to this side of the Atlantic, Lexus has said it will reveal “its first PHEV and a new dedicated BEV platform early in the coming decade.” Maybe those will make the trip…