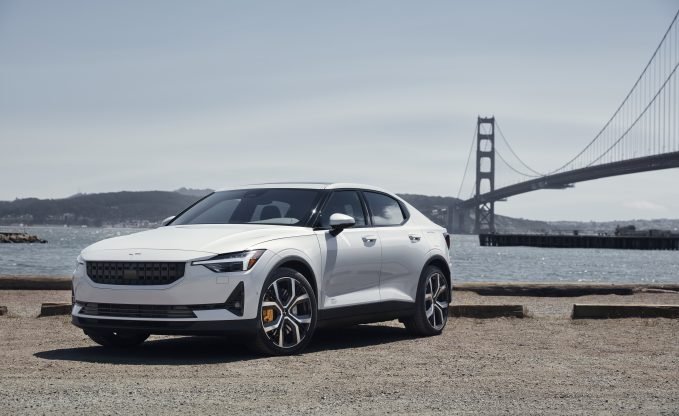 (Cue Jan Brady voice); “Tesla, Tesla, Tesla!” When it comes to a sporty, entry-level luxury BEV sedan, that’s pretty much the only game in town, and why not? The Model3 is, by most measures (and JD Powers nit-pickery aside), a great car.

But we’re so spoiled here in the First World, ain’t we? We like choices, especially when it comes to cars. After all, a car isn’t just transportation. If it was, we’d all be driving Priuses, ammiright? And there are folk like you and me out here who want an EV that’s somewhere between the “we don’t need you, hu-man” impersonality of the Tesla and the “are you wearing those shoes on my gas pedal” snootiness of the E-Tron. Something that has some of the cachet and reputation of a legacy brand, but with Tesla’s startup-fueled boldness.

That’s probably why Volvo (and Geely, the behemoth Chinese car company that bought Volvo from Ford in 2010) bought Polestar tuning in 2015 and leveraged it to become its 100% electric brand.  We’ve covered the creation of Polestar – as well as tested its first product, the Polestar 1 – but seeing its first battery-electric car brings into sharp focus the differences between Volvo and Polestar, and why the new brand was necessary.

Sure, Volvo and Geely’s engineering prowess and industrial might were helpful for bringing a sophisticated product to market, so “we’re not hiding ourselves from our parent company,” said Polestar’s head of PR, JP Canton. “We like the asset of consumer confidence, but the connection will fade over time.” Polestar is taking a very Tesla-like track that cherry-picks Volvo’s reputation for safety, reliability and value as well as a startup’s hipness and flexibility.

We’ve only written a little about the Polestar 2 here on Autoguide, so here’s what we learned at the tech briefing, given by Canton himself in a spare, well-lit popup retail space in San Francisco’s posh Union Square shopping district.

He told us it’s a steel unibody chassis, based on Volvo/Geely’s compact modular architecture platform (CMA). Suspension is McPherson strut front end, with a twin-tube multilink in back. It’s a four-door sedan-ish hatchback with folding seats and room for five, weighing in at 4,680 pounds and it’s 181.3 inches long (4 inches shorter but a lot heavier than the Model 3), in case you need to measure your garage.

The electric guts are what EV geeks want to hear about though. The Polestar 2’s 78 kWh (75 usable) battery pack, with 324 LG Chem pouch-style cells in 27 modules, weighs in at 1100 pounds sealed up tight in its aluminum casing. It’s not a skateboard design – that’s to allow more flexibility with packaging, likely made necessary by the ICE-focused CMA platform. It’s bulkier than a skateboard, but it does allow for individual replacement of individual modules for replacement or servicing.

The car is powered by two identical AC permanent magnet Valeo-Siemens motors good for a total of 408 hp and 487 lb-ft of torque. There’s no real transmission to speak of, but the motors are geared at 8.57:1, and it’s engineered to deliver power with a slight rearward bias. Charging is comparable to other EVs of its generation—150 kWh max, which should get you about 80% of your range back from zero in 40 minutes. In your garage, on a level two charger, it should be eight hours to 100%.

As for range, the EPA number isn’t out yet. Polestar’s target is 275 miles in mixed city/highway driving, and the European WLTP rating is 291 miles. A third party recently tested the Polestar 2 at a steady 70 mph, driving till it actually stopped moving, and reported 205 miles (197 with the performance package); impressive given the car’s weight and summer-performance Michelin Primacy4 tires.

Do you get excited about infotainment? This really deserves an entire article rather than a paragraph, but the Polestar 2 debuts an all-new Android Auto operating system. JP boasted of “considerable user interface research,” and it’s dripping with features and functionality all in an intuitive 11.15-inch center display. Over-the-air updates, music, podcasts, traffic info, maps, voice-activated Google Assistant, Google Play store, wireless Apple CarPlay and phone-as-a-key (the last two coming next year via an OTA update); it’s all in there, man, and three years of AT&T service is included with the car.

That tech isn’t just for blastin’ tunes (or This American Life for you Volvo customers) through the 13-speaker Harmon-Kardon stereo system. The Android software works seamlessly with the safety hardware and software, pushing info from the cloud about slippery roads or traffic hazards. The 2021 Polestar 2 comes standard with the Plus and Pilot packages, which gives you enhanced self-driving features including parking assist (coming via another OTA update) . The only thing the Polestar 2 lacks is a heat pump – Canton said the car was “Sweden winter tested” without one, though it might be added in a future model update.

I’ve driven a few EVs, so I was very eager to get a chance behind the wheel of the Polestar 2. My tester was in the not-quite-white Magnesium, with the Performance package and slate “WeaveTech” vegan interior and reconstructed black ash wood trim. The interior, though muted, put me in a nice seating position, but at around 5’6″, most cars do. The back seat looked okay for this class, but not roomy, and I dug the Performance Package’s gold-colored seatbelts. The adjuster controls—hell, all the controls—are as thoughtfully laid out and intuitive as you’d expect from a legacy manufacturer, as was the Android Auto system.

With minimal instruction I was soon Bluetoothed, GPSed and headed for a hopefully wildfire-free road to unwind my new toy. The driving experience in this car was exactly what you (and I) expected. Fast? Of course. Smooth ride on the freeway, even over potholes and expansion joints? Jo! Steering is either light, medium or firm, which you can quickly select on the big, easy-to-read touchscreen, and you can also fine-tune the one-pedal driving. Handling was neutral, and the car didn’t feel light, or even particularly small, but it wasn’t sluggish in any way—I felt remarkably connected to the road and part of the car.

That’s a good thing because it’s fast, with double the power of my personal Chevy Bolt. On a twisty, winding bumpy road like CA-84 to La Honda, you can’t fake good suspension, brakes or motor response, and the Polestar 2 is the real deal. I’ve never driven this road in a fast car—only motorcycles—and I had a lot of fun doing things that I really shouldn’t admit to. Let’s just say uphill passes aren’t a problem and leave it at that. You’ll have to stand by for real performance testing, but the Polestar 2 might be my choice on a racetrack.

First-drive reports are not reviews, and are generally favorable as the novelty of the car usually doesn’t wear off before the end of the event. So don’t expect much scientific analysis here. Our test route was cut off by wildfires (sad trombone sound), so I didn’t pound out a lot of miles—just 99 to be precise.

I couldn’t test top speed (the Euro model is limited to 124 mph) or acceleration, but it’s safe to say it’s fast and quick, and the suspension, brakes and tires deliver a sophisticated, controlled experience. You can push it more than most vehicles this heavy enjoy, and even with the traction control set to “off,” (which isn’t really “off”) I couldn’t get it to slide and oh, how I tried. Sure, it’s heavy, and I wouldn’t call it nimble, but it is a performance car that will make you smile each time you drive it.

What about dealer and warranty support? Polestar will have a network of dealers selling cars out of cute little Tesla-style retail spaces, close to the dining, shopping and entertainment areas of inner cities, not in auto rows. Servicing will be done at other dealers (likely Volvo) that opt-in to the service network. Polestar’s warranty is four-year, 50,000 miles, and the battery is covered for eight years or 100,000 miles (150,000 in California).

I did find nits. The center-console plastic felt thin, had sharp edges exposed under the fabric covering and squeaked softly when squeezed.  The rear window doesn’t offer a good view for the driver, and outrage of outrages, the USB ports are weird little USB-C things that require adapters for your good ol’ fashioned ‘Merican USB-A cables.

Overall, it’s a nice car, but maybe it’s not quite as nicely built  as a car with a $59,990 MSRP should. (Expect significant price cuts after the “Launch” edition is sold out, said JP.) In Polestar’s defense, my tester was an “MP01 Spec,” meaning the final production version will be a bit tweaked, and hey – not bad for the first-ever Chinese-built car I’ve laid hands on.

As an EV, it’s drama free and delivers what it promises, range wise. The car started out with 92 percent charge and maybe 200 estimated miles remaining. After very spirited driving in 95-plus degree heat, with the AC blowing icy cold and aforementioned uphill passing, the guess-o-meter was at 35 percent with a projected 65 miles of range remaining, consistent with the third-party test in July. Will it go 275 miles in optimal conditions? Maybe, but not with me driving it. It’s too much fun.

Sure, it’s not perfect, but as a first attempt it’s pretty impressive, and I know there are enough Volvo fans interested in EVs to keep this car sold out, at least in the “low 10,000s” volume expected for its first few years of production.  Good job Polestar—I think you’re here to stay.

Facebook Twitter Google+ LinkedIn Pinterest
Previous article There’s No Such Thing as Self-Driving Cars, Not Yet Anyway
Next article 2020 Toyota RAV4 Hybrid Review: The Dependable One