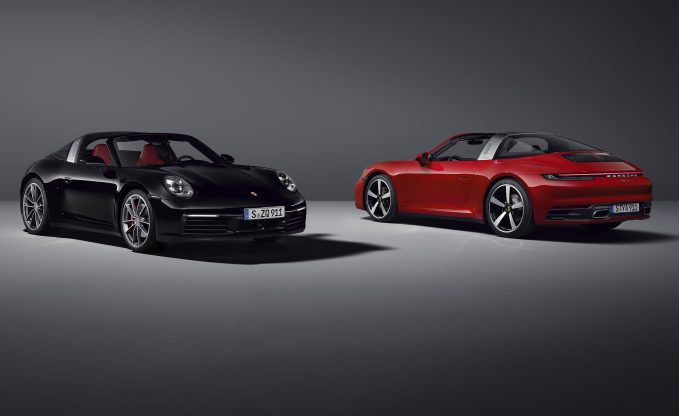 In Porsche geek-speak, these are the 992 -generation Targa top versions of the Carrera 4 and 4S, which get the automatic glass roof that retracts in 19 seconds flat. Prices start at $119,300 for the Targa and from $135,200 for the Targa 4S.

Just like the Carrera twins, the same 3.0-liter twin-turbo flat-six engine powers the 911 Targa 4 and Targa 4S. There is however a difference in the tune. The motor makes 379 hp of max power and 331 lb-ft of peak torque in the Targa 4 while the same engine produces 443 hp in the Targa 4S along with 390 lb-ft of peak torque. The Targa 4 now makes nine hp more than the 991.2 generation. Also, the Targa models have a strong mid-range as the 4s makes its peak torque from just 2,300 rpm while the 4 makes it from an even lower 1,950 rpm.

Both get the Porsche PDK eight-speed dual-clutch transmission as standard. Though customers can opt for the seven-speed manual transmission on the Targa 4S at no extra cost. Both cars come with the Sport Chrono package as optional extras with the PDK, but as standard on the Targa 4S manual. Porsche claims 0–60mph times of 4.0 and 3.4 seconds for the 4 and 4S with the Sport Chrono package. In addition, the Targa 4 gets a 19 and 20-inch staggered wheel setup with 235/40 tires at the front and 295/35 setup at the rear. The 4S gets a 20 and 21-inch wheel setup with a 245/35 at the front and a super-wide 305/30 setup at the rear. Porsche’s Active Suspension Management is standard kit with two damper settings and a wet-mode as standard.

You can upgrade the brakes to ceramic composites from cast iron rotors on both Targas which measure 330 mm and 350 mm respectively. You can also upgrade to a trick electronic limited-slip differential on the Targa 4—it is, however, standard in the 4S with PDK. It is swapped with a mechanical LSD if you opt for the manual 4S.

The styling is as appealing as a 911 can be. With the rear wraparound glass section, the Targa style roof and the sliver roll bar, the Targa stands out even among the 911 crowd and is easily among the most eye-catching cars on the road today.