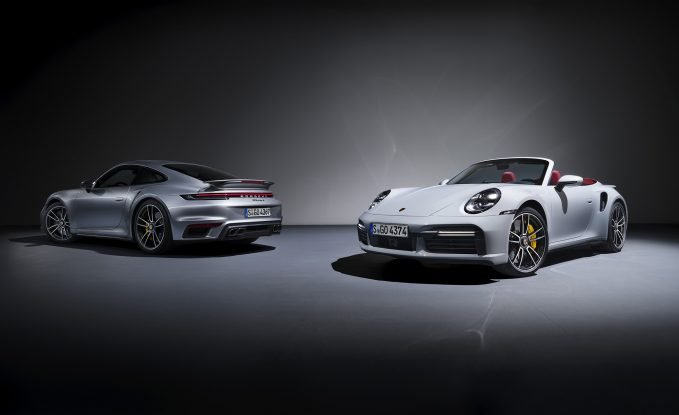 The new Turbo S is now the fastest and the most powerful 911 Turbo model yet. 0-60 mph is dealt with in 2.6s which we honestly think is an underestimation from Porsche. The 3.8-liter twin VTG turbo 6-cylinder boxer engine pushes out 640 hp and 590 lb-ft of torque. The engine is mated to a turbo-specific 8-speed PDK dual-clutch transmission. Flat out it will be nudging 205 mph.

Porsche has also reworked the VTG turbos and placed them in a sequential format and fiddled with the charge cooling as well. They system now features larger turbines and electrically operated wastegate flaps. It also features larger air coolers which have now been moved from the side of the car to directly behind the engine.

The new Turbo S is almost 2.0 inches wider at the front while the rear had barely widened by an inch. And according to Porsche, the changed track widths, optimized aerodynamics, and new tires contribute to its agility and sportiness. Speaking of tires, the Turbo S comes with staggered center-lock wheels which vary in size. The front gets 20-inch wheels adorning 255/35 tires while the rear 21-inch wheels wear 315/30 rubber.

Along with the Turbo S Porsche has also introduced the Cabriolet version. The specs are identical to the coupe albeit with two key differences. The Cabriolet comes with a soft-top roof (obviously) and instead of 2.6 s the Cabriolet is slower at the sprint to 60 mph with a time of 2.7s.