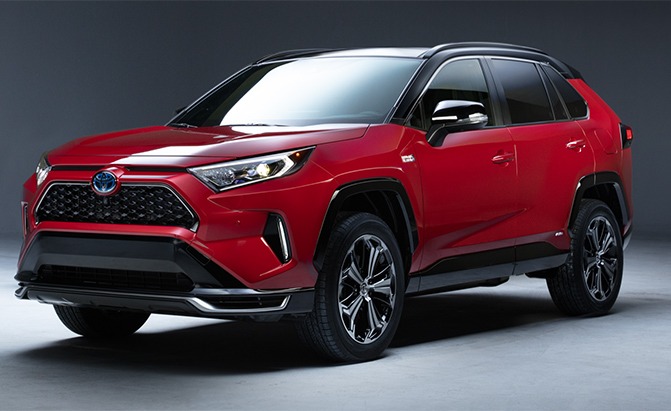 It might seem hard to believe, but this will be Toyota’s second-quickest production model next year. Yes, the 2021 Toyota RAV4 Prime packs both more performance and more efficiency.

The RAV4 Hybrid has already been something of a sales hit for Toyota. This generation of the crossover has been in general really, ever since its launch last year. But it’s the Hybrid in particular that has seen a huge uptick, registering a 72% increase year-on-year. The 2021 RAV4 Prime should bolster that success, acting as the de facto performance flagship of the range.

Let’s get right to the headline figures, shall we? How does a combined 302 hp sound? Or a 0-60 mph time of 5.8 seconds, putting this compact crossover behind only the Supra in the Toyota lineup? Maybe you’re (rightly) concerned about its environmental claims—then perhaps the 39-mile battery-only range is more your speed.

Under the hood is a new version of the 2.5-liter, Atkinson-cycle four-cylinder found in the regular RAV4 Hybrid, pumping out an identical 176 hp. A pair of more powerful electric motors bolster the gas engine, with an uprated lithium-ion battery feeding them the juice. The battery doesn’t eat up any cabin space, and it keeps the center of gravity nice and low thanks to its placement below the floor.

The new layout adds 83 hp to the Hybrid’s corral, totalling the combined 302 hp. Meanwhile, thanks to that longer all-electric range, Toyota is aiming for a 90 mpg-equivalent rating.

Toyota even referenced the previous high-water mark of RAV4 performance: the V6-powered model of 2006–2012. At the time it was one of the quickest models in the company’s lineup, capable of clicking off the run to mile-a-minute speeds in 6.3 seconds. It also had a combined 21 mpg rating.

The RAV4 Prime will be available in two trims: SE and XSE. The former will be unique to the Prime in the RAV4 family, featuring an exclusive front grille and spoiler combo. Blacked-out exterior pieces and a set of 18-inch machined alloy wheels add a sprinkle of aggression. The SE features an 8.0-inch touchscreen with Apple CarPlay, Android Auto (finally) and Alexa support, heated front seats, a 7.0-inch gauge cluster display and power liftgate.

Buyers moving up to the XSE get the choice of two-tone exterior paints, including the new Supersonic Red look shown off here. The XSE features larger 19-inch wheels and unique vertical LED daytime running lights too. Inside the XSE adopts the first example of paddle shifters in a RAV4, plus synthetic leather seating, a standard moonroof, wireless charging and an uprated 9.0-inch center screen.

It seems to us that the recently-announced BMW X3 xDrive30e has an unlikely competitor. Sure, not many people are likely to cross-shop that and this revved-up RAV4, but on paper it’s certainly a close fight. We look forward to finding out more on the RAV4 Prime, including its price, when it hits dealer lots next summer.