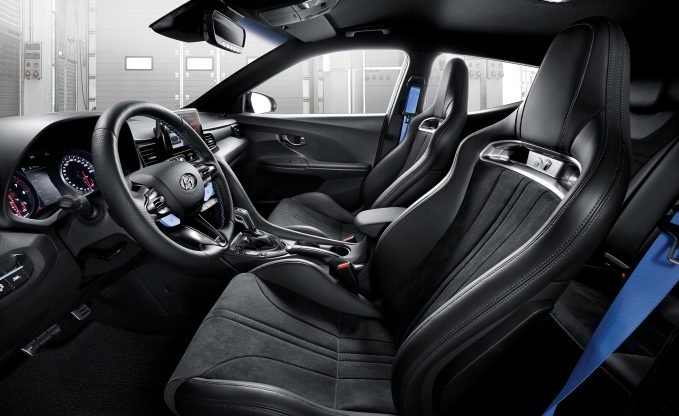 Hyundai is widening the appeal of its little hot hatch by offering both manual and automatic transmissions.

Look, we’re already big fans of the Hyundai Veloster N. We’ve called it one of—if not —most fun-to-drive cars under $30,000. As the funky three-door hatch approaches its second birthday, Hyundai is giving it a selection of small updates to broaden its appeal on the market.

The biggest change for the 2021 model year is the addition of a dual-clutch automatic transmission. It’s been a long time coming: Hyundai announced the two-pedal version way back at the car’s launch in fall 2018. The standard six-speed manual remains—and it’s a great example of the breed. But it’s no secret that manual transmissions are  niche in the North American market. If an auto means more people put the Veloster N on their shopping list, and keeps fun cars like it around, well that sounds like a win-win to us.

DCT-equipped models come with an “N Grin Shift” feature, which boosts maximum torque from 260 to 278 lb-ft for up to 20 seconds and minimizes shift times.

The lesser Veloster models already offer a (different) dual-clutch setup. This eight-speed DCT is also expected to arrive in the Sonata N-Line later this year. Now that the Veloster N has a self-shifting option, only the Subaru WRX STI and recently-refreshed Honda Civic Type R continue as manual-only options in this segment.

Hyundai is quick to point out the N DCT stands up to the performance division’s thermal endurance standards.

A new transmission option isn’t the only change for the 2021 Veloster N. Hyundai is bundling in the popular Performance Pack on the standard car. This includes a limited-slip differential, 19-inch wheels wrapped in Pirelli P Zero summer tires, a 25-horsepower bump to 275 total, and larger brakes. According to a Hyundai spokesperson, the take rate for the Performance Pack was roughly 85-percent through 2020. It’s little surprise it’s now standard, then.

Also new, no matter the transmission choice, is a pair of lighter performance seats. The heavily bolstered buckets shave 4.4 pounds off the N’s curb weight, and even include a little light-up “N” logo below the headrests. Hyundai’s suite of driver assistance tech, including rear cross-traffic alert, blind-spot warning, lane-keep assist, lane following assist, and automated emergency braking, is also standard.

2021 Veloster N models will begin showing up in dealerships this October. Expect a price jump thanks to the added standard equipment, possibly even slightly over the $30,000 mark. Even still, it will represent one of the strongest new-car performance bargains on the market.