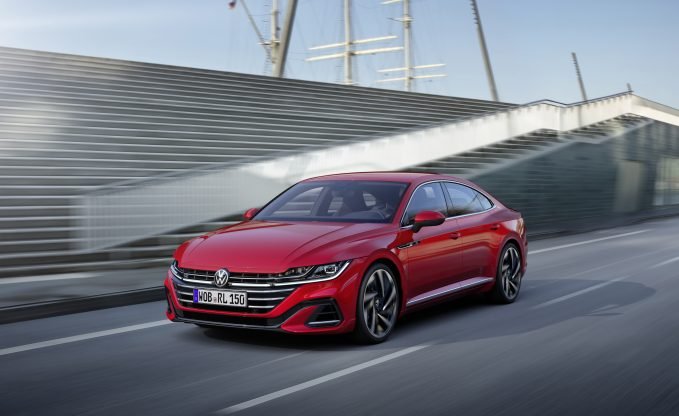 Despite its debut in April 2019, Volkswagen has already given its flagship Arteon a comprehensive facelift.

It’s the youngest car in Volkswagen’s lineup, but that hasn’t stopped the German manufacturer from refreshing the Arteon. The 2021 Arteon also debuts as a plug-in hybrid and an oh-so-good-looking shooting brake—but both will be exclusive to the European market. We in North America will get the four-door fastback version only, which isn’t such a bad thing. Volkswagen has also simplified the Arteon trim lineup and will only be available in three trims, SE, SEL R-Line, and SEL Premium R-Line.

The Arteon gets a reworked front fascia with a redesigned LED DRL setup which now includes an lighting strip running the width of the grille (R-Line trims only). It also highlights the new VW logo. The body-colored air-intake surrounds protruding from the base of the bumper gives the Arteon an aggressive stance. At the rear changes are subtle but noticeable: the tail lamps are sleeker and all-LED. The Arteon lettering has been redesigned as well. A thin spoiler sits atop the tailgate (R-Line trims only) and the trapezoidal quad exhaust tips round out the sleek rear.

Changes to the exterior pale in comparison to the updates the cabin receives. VW Designers have completely redesigned the dashboard. It now features a sleeker design with a brushed aluminium finish running the width of the central dash and a body-colored pinstripe just below the air-con vents. Digital Cockpit with a 10.25-inch digital screen replaces the old analogue instrument cluster and the steering wheel gets capacitive controls added to it as well. The controls for heated seats, three-zone climate control, windscreen and window defrosting now shift to a touch-sensitive panel on the center console. Other updates include new fabric and leatherette upholstery. The infotainment system is the all-new MIB3 touchscreen system which is hooked up to a new Harman Kardon 700-watt speaker system.

The powertrain will continue to be the solitary 2.0-liter turbocharged TSI motor which pairs with an eight-speed automatic transmission that drives the front wheels. It makes 268 hp of max power and 258 lb-ft of peak torque. As we mentioned, front-wheel drive comes in as standard while AWD is optional on the SEL R-Line trim and standard on the SEL Premium R-Line.

Volkswagen in its press release cheekily mentions in passing that the Arteon will be available as the Arteon R and the Arteon Shooting Brake—but just not in the US. These models will be exclusive to Europe. Rubbing our noses in it further, the release also highlights that a plug-in version making 215 hp will also be available alongside the 315 hp Arteon R. We could speculate which powertrains these numbers belong to but we would rather end our misery right here.