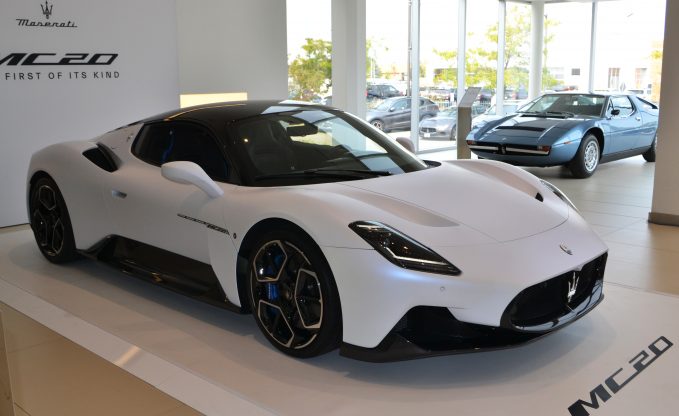 No front splitter no big wing, just a clean and pure Italian design.

The Maserati MC20 is the Italian brand’s first new supercar in 16 years and its first all-new mid-engined supercar in decades. Yes, the MC12 was the last mid-engined Maserati but it was essentially a Ferrari Enzo with new clothes and a different badge. The MC20 is a whole different animal. It marks the beginning of a new era for Maserati, free from living in the shadow of the Prancing Horse.

We’ll have new… everything, please

After FCA decided to rid itself of Ferrari, Maserati had both a huge challenge and an opportunity in front of it. And its pleasing to see it was seen more as the latter. Everything about the MC20 is brand new. The car is built around a carbon-fiber tub developed by Dallara. Maserati has also used virtual development tools extensively to design and develop the MC20 in record time, from drawing board to reality in just over 24 months.

The overall shape of the car is a result of extensive virtual and wind-tunnel testing. But before you frown, the designers had a large say in how the car looks as well. It seems that the most of the white surfaces were all okayed by the designers while all the darker parts were the work of aerodynamicists. Some will argue, my colleagues included, that the MC20 doesn’t look like a Maserati. But to be fair this is the first true mid-engined Maserati since the Merak, so how a Maserati supercar should look is practically a clean slate.

What about the POWER?

Maserati also developed a brand new engine for the MC20. It’s called the Nettuno, named after a certain trident-wielding god. This complete in-house project displaces 3.0 liters in a 90-degree V6 configuration and uses twin-turbochargers, one for each bank. It also utilizes Maserati’s new twin-combustion technology which makes use of twin spark plugs for each cylinder. At lower revs only one spark plug is used, but the second one activates once the needle goes past the mid-range mark.

The result of all this technological wizardry is 621 hp of max power and 538 lb-ft of peak torque, 0-62 mph in 2.9 seconds and a top whack of over 200 mph. The engine also uses dry-sump lubrication, which allows engineers to place the engine two inches lower in the car, thereby reducing the center of gravity. The engine pairs with an eight-speed dual-clutch gearbox and drives the rear wheels. That is correct, the MC20 is a 621 hp rear-drive supercar—woohoo! Maserati also says the sound of the exhaust is purely organic and hasn’t been artificially enhanced in anyway.

Finally, the engine and the car will be made at the company’s home in Modena.

Of course it will: it’s running a double-wishbone suspension setup on all four corners. Along with the best kind of suspension setup, it also employs Bilstein adjustable shocks on all four corners. The brakes are by Brembo and are carbon-ceramic units with six-piston calipers in the front and four-piston calipers at the rear. A limited-slip diff and locking differential also resides on the rear axle to keep the tail in check. In a departure from the usual supercar kit, the MC20 uses Bridgestone Potenza tires in the front and rear with 245 and 305 sections respectively. Needless to say the tires have been specifically developed for the Maserati flagship.

For the most part, yes. The Nettuno engine will power most of the brand’s upcoming cars including the new 2023 Maserati Gran Turismo. But, the company will come out with three versions of the MC20. One will be a hybrid: whether it will be a PHEV or a series hybrid remains to be seen. Our bet would be on the PHEV. There will be an all-electric version for sure. The chassis was developed with electrification in mind and the middle of the tub will house the batteries. No information about the electric MC20 is available as of now, but it will be an AWD supercar and will come with a three-motor setup, two for each of the rear wheels, and one for the front axle, complete with torque vectoring.

The MC20 will go into production in 2021 and delivery of the first car will be in fall, essentially making it a 2022 model. It’s heartening to know that Maserati is carving its own way as a luxury supercar maker without leaning on a brand like Ferrari. It took decades for an all-new Maserati supercar but thank your deity of choice it’s finally here and we are alive to witness this piece of future history.