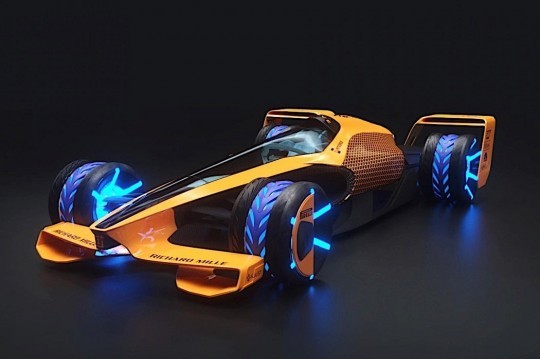 Just as the rest of the auto industry, Formula too is on the brink of a major evolution. Electrification and the need to get the audience more involved – possibly even directly – are just two of the many challenges of the sport in the years ahead. And no one dares to guess how F1 racing will change.

No one except McLaren, one of the greatest names in the Formula 1 universe.

In January, through its Applied Technologies division, McLaren showed the world a vision of Formula 1 racing not in the decade ahead, or in the one that comes after that, but a vision for the year 2050: the McLaren MCLExtreme.What is it?
The McLaren MCLExtreme is a Formula 1 car designed for the Grand Prix races of the year 2050 and beyond. In McLaren’s vision, future F1 cars will still use four open wheels, a rear-wheel-drive configuration and a driver behind the wheel.

But, as with all other future cars, this too will be electric. It will also be a transformer, capable of modifying its shape in such a way as to allow for either high speeds to be attained or more stability and control to be generated.

The MCLExtreme will have a brain of its own, an artificial intelligence that can be connected directly to the driver’s own brain via a symbiotic link fitted in the helmet and sensors located inside the race suit. The Transparent Shapeshifting Formula 1 Race Car

In 2050 Formula 1 will probably still be about pleasing the fans more than anything else. That means the cars themselves will be entirely different when it comes to materials, shape, capability and so on.

The MCLExtreme is made from a transparent material so that spectators can look directly inside the cockpit and see the driver struggle with the wheel and pedals. This material will also be capable of changing color to relay the driver’s state of mind: if the driver is frustrated or angry, the body of the car and its self-repairing tires will glow red, for instance.

MCLE will use a lot more drag reduction systems that are allowed today in Formula 1 cars, including sidepods that expand and contract depending on what the driver and AI hope to achieve. WHile on straights, the pods contract to turn the car into a bullet that speeds by at 500 km/h (310 mph). They retract when cornering for better stability and control.

Also contributing to more downforce are less aerodynamic elements attached to the upper part of the car, and a sculpted floor and diffuser. Electricity Is What Makes the MCLExtreme Tick
Underneath the body of the MCLE, or more precisely molded in the body itself, McLaren envisioned a flexible electric battery capable of either wireless charging or stealing electricity from the car in front, within a defined window of time.

The tires on the car will feature inductive charging coils which would allow the racer to feed the battery with electricity directly from the ground. In this way, there’s a good possibility to have the battery reach 50 percent capacity in just 30 seconds, and all on the go.

Most the power of the battery of the MCLE is to be fed to a “small electric” motor of undefined power. AI Computing Power Meets Human Brain

Control of the MCLExtreme is by no means as difficult as in today’s Formula 1 cars. Essentially, all the driver has to do is think it and the car will do it.

Using a symbiotic link fitted in the helmet and sensors located inside the race suit, the driver connects directly to the car and essentially makes the machine a copilot. The AI sends only the most relevant of information back to the driver, virtually replacing the pit wall.

Because the AI is so interconnected with the mind of the drivers, it can allow them to control the car with their mind in some sense, while at the same time reading their emotions and hanging them out to dry on the car’s body for all to see.

The AI will be capable of learning and predicting the driver’s state of mind and actions, carefully suggesting strategy and key information correlated with those readings.

To be able to fully understand what the car tells them, drivers will have to wear purpose-built suits, ones that are also capable of withstanding the high stresses of driving a race car at 500 km/h.

The helmet itself is a computer in its own, coming complete with a head-up display on the interior of the visor.The Experience of a 2050 Formula 1 Race

Unlike what we get today from Formula 1 races, the ones of 2050 are sure to provide entirely new thrills and experiences for spectators. That’s because not only the cars will be different, but the racing tracks as well.

Given the high-speeds of the cars and the fact that they are driven by a human-machine combo, the tracks can be reconfigured to allow for incredible speeds to be attained, replacing for instance hairpins with banked sections or even loops. Parts of the tracks will be glass-walled, and here and there they can run below the feet of the spectators, with the glass track allowing from incredible views from right above the racers.

Because of the technologies deployed on the cars themselves, some of the elements of current Formula 1 races might disappear altogether. For instance, there will be no more pit stops. That, in itself, could make F1 racing less thrilling, but luckily pit stops could be replaced with something much better.

McLaren proposes that instead of pits stops a so-called E-pitlane to be enforced.

The E-pitlane is a portion of a track equipped with inductive charging. Once on it, drivers can choose to either drive slowly for better connectivity and recharge rate, of fly past that portion of the track in the hopes the battery doesn’t run out.

McLaren says each of the drivers should select their own strategy depending on how they see the race and that this element could prove spectacular for F1 racing.

McLaren's vision of the future of F1 racing is undoubtedly a thrilling one. The MCLExtreme, although only created in the virtual realm, might be just one glimpse into this future.