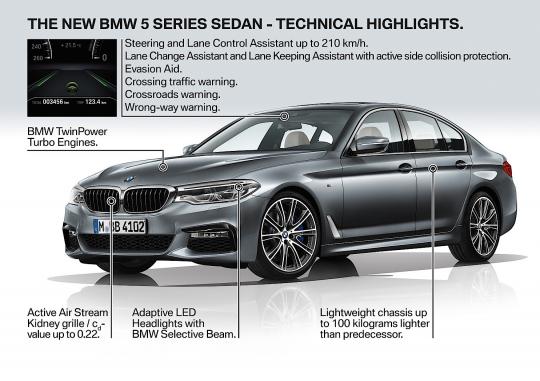 When BMW launches a new 5 Series, it’s not merely a debut but a make-or-break course of action. Since the first-ever 5 Series – the E12, BMW made it clear that it builds THE sportiest sedan in the mid-size segment.

Besides the driving dynamics, things like comfort and gadgets also matter a lot for people interested in a car from this segment. BMW paid attention to what the people want and, as it happens, this generation is the best one yet.

Internally referred to as the G30, the sedan version of the 2017 BMW 5 Series is better in every single way compared to its venerable predecessor, the F10 5 Series. Beauty is in the eye of the beholder, surely, but characteristics that can be measured in numbers and usability favor the G30 5 Series. To comprehend the tidbits that make the seventh generation the best one yet, I’m much obliged to break them down in 5 easy-to-understand grounds.

True to the BMW EfficientLightweight design concept, the platform and body of the G30 5 Series make extensive use of aluminum, magnesium, and a mix of high-tensile steels. Thus, up to 100 kilograms (220 pounds) were shaved off the weight of the F10 5 Series. All four doors, for example, boast aluminum shell construction and weigh merely 6 kilograms (13 pounds) each, including hinges.

Aluminum is also used for the trunk lid, hood, engine cross-member, rear side-members, and roof. To put these savings into perspective, the lightest model in the G30 5 Series family is the 520d with the 6-speed manual box, which weighs 1,615 kilograms (3,560 pounds) according to the EU standard. The F10 5 Series with the least weight is the 520i 6MT, weighing 1,670 kilograms (3,681 pounds).

Oh boy, where to start? Just like the G11 7 Series, the G30 5 Series can be parked remotely by using the optional BMW Display Key. You know, that lil’ gizmo that looks more like a smartphone rather than a key. Then there’s the head-up display, which now prides itself on a resolution of 800 x 400, plus a projection area that’s 70 percent larger that that of the preceding generation.

For the melomanic in you, a 1,400-watt Bowers & Wilkins sound system is available if, for some reason, you need a boombox on wheels. In the area of semi-autonomous driving, the G30 5 Series can apply steering interventions when the situation calls for it at speeds as high as 210 km/h (130 mph). The G30 5 Series can also stop itself if the driver’s reflexes aren’t sharp enough. Integral Active Steering rear-wheel steering is available as an optional extra.

The iDrive infotainment system borrows pretty much the same functions as those found in the G11 7 Series, gesture control and all. On the 10.25-inch display of the infotainment system, the driver can access every little setting imaginable through the simple flick or push of the rotary controller. Other praiseworthy bits and bobs include wireless phone charging, wireless Apple CarPlay mirroring, and an LTE-capable Wi-Fi hotspot for up to ten devices.

At launch, five powerplants will be available. Only one of those can be matched with a manual, and that is the rear-wheel-drive 520d. From the 520d xDrive upward, every single engine option is connected to a ZF-developed 8-speed Steptronic automatic transmission. The B47 2.0-liter TwinPower Turbo diesel engine produces 190 PS (140 kW) and 400 Nm (295 lb-ft) between 1,750 and 2,500 rpm. The automatic-only 520d EfficientDynamics Edition model is the most frugal diesel in the G30 5 Series family, drinking as little as 3.9 liters per 100 kilometers (60.3 U.S. mpg and 72.4 imperial mpg) on the combined cycle.

Until the Bavarian automaker is done developing the F90 M5, the M550i xDrive will be the most driver-oriented G30 5 Series in the family. The M Performance land missile replaces the F10 550i and F10 550i xDrive models of yesteryear.

Currently the only V8-powered G30 5 Series, the M550i xDrive sends drive to all four wheels whether you like it or not. Happily, however, it’s a rear-biased system. Not only that, but xDrive enables the driver to carry a bit more speed into a corner and come back on the loud pedal sooner when exiting the corner.

Eco-friendly credentials? The 530e iPerformance plug-in hybrid has those

To be frank, nobody regards fuel economy as the deciding factor when buying a 5 Series. Nonetheless, BMW developed a plug-in hybrid version of the G30 5er. Dubbed 530e iPerformance, the powertrain is shared with the 330e and it comprises of the 2.0-liter TwinPower Turbo four-banger and an electric motor.