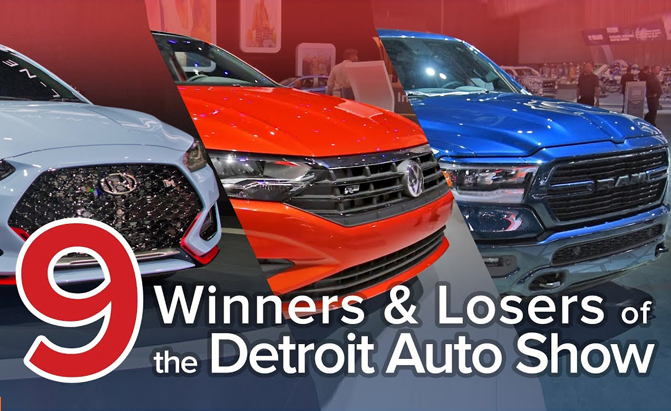 Another Detroit Auto Show is in the books – THANK GOODNESS!

There were big reveals this year and small ones, important unveilings, and others we’ve already forgotten about. Making sense of this mess, the staff has picked some winners and losers and we’ve even thrown a few undecideds in for good measure, vehicles we just couldn’t decide on.

Let’s start with the vehicles that impressed us most. The 2019 Ram 1500 was unquestionably the shining star. Lighter, stronger and more capable than ever before, this full-size pickup is loaded with technology, including a 48-volt mild-hybrid system and an available infotainment system with a Tesla-like 12-inch screen. Thanks to all this innovation — and an unexpectedly premium interior — it’s easy to see why Ram impressed us so much.

editors were smitten with the all-new Hyundai Veloster, which has also been completely redesigned for 2019. Set to launch in the second quarter, this asymmetrical hatchback will be offered with three different engines. But the one you’ll probably want is found in the high-performance N model. A 2.0-liter turbo, it’s rated at a muscular 275 horsepower and is matched exclusively to a six-speed manual gearbox. Hmmm, a South Korean Civic Type R … what’s not to like?

Kia’s overhauled Forte also impressed us thanks to its Stinger-inspired styling and premium interior. Longer and more spacious than before, this not-so-compact sedan will feature a 147-horse engine and a Kia-developed continuously variable transmission. This powertrain dream team should help the Forte deliver an impressive 35 miles per gallon combined.

Another winner from Detroit is the new 53 Series of cars introduced by Mercedes-AMG. Several of the company’s high-performance models will be motivated by a turbocharged 3.0-liter inline-six that’s augmented by company’s EQ Boost 48-volt electrical system. This combination results in 429 horsepower, 384 pound-feet of torque and almost certainly thrifty fuel economy ratings.

So, Ram, Hyundai, and Kia had three of the most impressive reveals at this year’s Detroit Auto Show. As mentioned above, we all nominated some definite losers and we’ll get to those in a minute, but we were undecided on a couple of products.

And one of the most controversial is certainly the 2019 Silverado, which should be headline news, but somehow it feels like Chevy rushed this truck out to try and steal some of the Ram’s thunder. Sure, it’s lost up to 450 pounds, will offer a straight-six diesel and is loaded with clever storage solutions, but the exterior design is nothing to write home about and its interior looks a generation or two behind rivals, which is largely why we’re split on the Silverado.

Some derided the 2019 Jetta for being too boring. Others thought Vee-Dub should have gone further with this car. But it’s a handsome sedan that will almost certainly age well. It also features a decently premium interior, can be equipped with a reconfigurable digital dashboard and even comes with a six-year/72,000-mile, fully transferable bumper-to-bumper warranty. It doesn’t matter if you like this car — that’s great protection.

OK, enough undecideds. Want to learn about the new-vehicle introductions we didn’t care for? Great! Here we go…

This comfort-focused sedan has never been a thriller — instead, it always strives to keep blood pressures safely in check. Almost universally, we found this car’s massive plastic grille ungainly. But saddest of all is that the biggest news about this new Avalon is that it features Apple CarPlay, which is not at all impressive because almost every other car on the market already does this.

After years on the sidelines, Ford is finally getting into the midsize pickup segment, and yet none of us seem to care. Dearborn is repatriating the international version of its popular Ranger nameplate, but even though it’s been extensively reworked for American duty, it still feels like we’re getting expired leftovers. While almost certainly a capable vehicle, this pickup is rather unexciting to look at and offers no engine or transmission choices. The only powertrain offered is a 2.3-liter EcoBoost four-cylinder matched to a 10-speed automatic gearbox.

The final vehicle on this list is another product from Ford. The brand’s hot-rod Edge ST looks nice enough, but not all editors think it makes sense… at all. It offers optional high-performance brakes for crying out loud! Ford might be trying just a little too hard here. In comparison, mainline Edge models seem much more appropriate.

What are your favorite reveals from the Detroit auto show? Which ones did you dislike? Sound off by leaving a comment down below. Please, let us know if we’re spot-on with these vehicle choices or totally off our collective rocker.