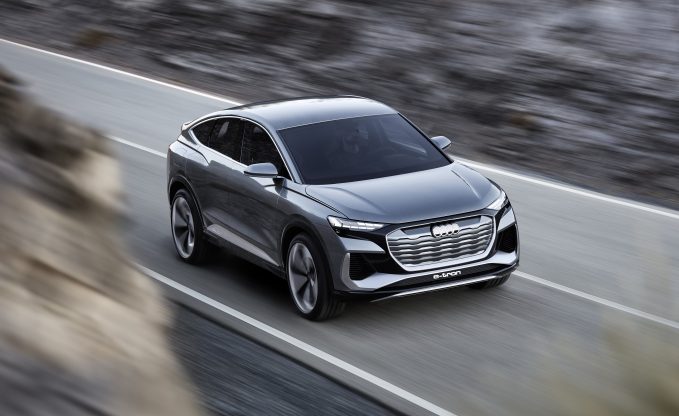 The sexier Q4 to get augmented reality, will be significantly cheaper than the original e-tron. Audi today pulled the wraps off its latest electric vehicle and surprise, surprise, it is an SUV. To be more precise, it is the coupe version of the Q4 e-tron showcased at the 2019 Geneva Auto Show.

Technically both cars are identical. Both feature the same 225 kW twin-motor setup hooked up to an 82 kWh battery pack that can propel the compact SUVs for 310 miles on a full charge. A caveat here though, it can do 310 miles only in RWD mode; if Quattro is engaged, the range drops to about 280 miles. The Sportback is set to go in production in 2021 and the Audi coupe SUV will reach its customers by the summer of 2021.

Design is easily the most defining attribute of the Sportback. The sharp LED headlamps coupled with the deep Singleframe grille gives the Q4 an aggressive front fascia. And if you had any doubt that what you’re looking at is an electric Audi, the letters e-tron on the lower half of the front bumper will clear things right up.

Flared wheel arches at the front and rear add more character and aggressiveness to the overall design. The strong shoulder line coupled with the coupe-esque sloping roofline that integrates into a rather stocky spoiler makes the Sportback look longer than its sibling. The 22-inch wheels and the LED bar of taillamps that run the width of the tailgate further attempt to reaffirm the Sportback’s sporty inclination.

As for the underpinnings, both the front and rear operate independently. The rear motor makes 150 kW of power while one at the front makes 75 kW. The torque figures for the two motors stand at 228.6 lb-ft and 110.6 lb-ft respectively. In addition, the rear uses a synchronous motor while the front utilizes an asynchronous setup for better torque distribution between the front wheels. Finally, the AWD Quattro is an on-demand system on the e-tron and only engages when more power is required or it detects a slip in traction. It also boasts of a perfect 50:50 weight distribution and a 0-62 mph time of 6.3 seconds.

The Q4 Sportback e-tron like the Q4 is also based on the MEB electric platform and stands 180.7 inches long, 75.5 inches wide and 63.5 inches high. Add to that 100.9 inches of space between the front and rear wheels, and you end up with a rather large vehicle. Inside, space is bound to be aplenty since the e-tron doesn’t have a transmission tunnel so customers should expect lots of legroom. The cabin will, however, feature only four seats instead of a rear bench so think of it as a more luxurious electric drive. It’s not just luxurious but also more environmentally sound (obviously) as the floor is lined with recycled materials.

It’s a no-brainer that the Sportback will be a tech-fest. But apart from the virtual cockpit and the 12.3-inch HD touchscreen infotainment system which will also feature on the Q4 e-tron, the Sportback has another trick up its sleeve. It will also feature a massive heads-up-display with integrated augmented reality which can display arrows directly on the course of the road. Plus, the touch controls on the steering wheel can be configured to select the most frequently used functions.

Though Audi has not released the pricing details, we can estimate that since these are significantly smaller than the original e-tron twins, the price tag will be smaller as well. We expect the twins to start between $47,000 and $50,000.