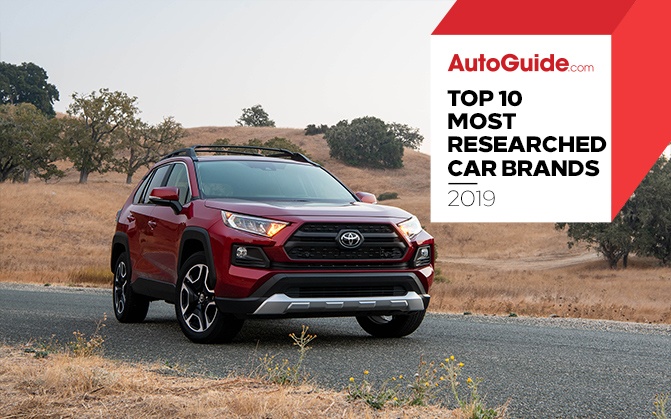 Our mission here at AutoGuide.com is to serve you, the reader. We review scores of cars each year, do comparisons between popular models, and even check out automotive accessories. Buying a car is one of the biggest financial decisions most of us make in life, so knowledge is power.

We’ve crunched the numbers and found the 10 brands our readership spent the most time reading and researching this year. Just like our most popular car reviews of the year, there are a handful of surprises here. There are also some expected names. What can we say, you folks like your Toyotas!

We present the following list in alphabetical order. Here they are: your most-researched car brands of 2019.

The ol’ blue-and-white roundel remained a strong pull for readers this year. The Munich manufacturer made sure of it by expanded its SUV range this year with the enormous X7 flagship. The biggest BMW high-rider is already the third-best selling model in the X lineup, and is fast approaching the vaunted 5 series in monthly sales.

For 2020 the Bavarians will look to bolster the coupe and sedan side of the business with the MINI-based 2 Series Gran Coupe, and—on the other side of the spectrum—the hardcore, 444 hp M2 CS. Expect to see the production version of the new 4 Series coupe too, complete with controversial grille.

General Motors truck-and-SUV brand was its strongest-performing marque amongst the discerning AutoGuide.com readership. Between its tough trucks the expanding availability of the luxury Denali trim across the lineup, GMC is well-placed in the current American automotive landscape. Just don’t mention that the mid-sized GMC Canyon truck recently topped Consumer Reports’ list of the least reliable cars of 2020.

Kia had a strong 2019, carried on the shoulders of the impressive new Telluride. The three-row crossover immediately put the segment on notice, thanks to a blend of affordability, interior quality, and unique design. It’s a big deal for the Korean maker—literally.

The rest of the lineup holds up too. The recently remodeled Forte covers mainstream and sporty compact options, while the Soul—also new for 2020—is still a funky box, now with available EV options. And there’s the fun-loving Stinger, our 2018 Car of the Year.

2020 will see Kia release a dramatic reimagining of its bread-and-butter Optima mid-size sedan.

Whoa, a brand with more than three letters! Lexus’ lineup continues to resonate with our readership, mixing much-vaunted Toyota reliability with a dash of added luxury. The brand has recently expanded its coverage both down- and upmarket: formerly in the shape of the tiny UX crossover, and latterly with the stunning LC convertible. The UX is even getting an all-electric version in 2020… just not for North America.

Lexus hasn’t ignored the sedans it built its reputation on either. The ES remains a comfy cruiser of a four-door, but now with more assertive styling.

Lincoln is enjoying something of a resurgence. After years spent peddling little more than rebadged Fords, the brand has rebuilt itself as a purveyor of uniquely American luxury goods. It started with the big Continental sedan, but is best exemplified in the Lincoln SUV lineup.

The Aviator takes the basic bones of its Ford Explorer sibling and ratchets up the content with things like 30-way adjustable seating, a 28-speaker sound system, and even vehicle warning chimes made in collaboration with the Detroit Symphony Orchestra.

Lincoln has also adopted hybrid power, but in a way that makes sense for a luxury brand. It isn’t focused on miles per gallon: instead, it adds more power without any penalty at the pumps.

The modern Mercedes-Benz lineup is enormous. Stretching from the new A-Class sedan right up to the three-row GLS, there’s something for all (pricey) tastes at the Three-Pointed Star.

Looking for the venerable C-Class? It still holds its own in the cutthroat compact luxury segment, offering a more luxurious feel than its contemporaries at BMW and Audi. The S-Class remains the standard bearer of the full-size segment too. And if you’re lucky enough to be in the market for a pure, two-seat sports car, there’s the AMG GT—a vehicle we’d even consider better than the Porsche 911.

Diesel power. The best interior in its class. Ads that major on Americana. Blame whatever you’d like: Ram is big with the AutoGuide.com readership. Buoyed by the truck-of-a-million flavors 1500 model, FCA’s big rig brand appeals to a wide demographic. With rumors of a mid-size Dakota return still going strong, we expect Ram to kick off the next decade with a continued strong presence.

Most Popular Review: 9 Things That Stand Out About the 2019 Rolls-Royce Cullinan

It turns out you have a taste for the finer things in life, dear readers. Yes, Rolls-Royce quietly slipped into the top 10 list of most-researched brands here. Quietly, because anything more boisterous than that would be most unbecoming of a Rolls, natch.

The British ultra-luxury good purveyor branched out into the white-hot land of SUVs this year with the Cullinan. Sure, it’s the price—and weight—of a small house, but it arguably carries the brand’s ethos than some of the other UK-based SUVs out there.

We blame the Cybertruck. The angular Muskmobile dominated talk in the final few weeks of 2019. It showed up the same week as another hotly-debated electric model: the Ford Mustang Mach-E. That it eclipsed talk of that car—a four-door, crossover, all-electric version of one of America’s most-loved nameplates—speaks to the widespread recognition of the Tesla name.

It isn’t all about the stainless steel big boy, however. The Model 3, the brand’s volume leader, continues to outsell other pure EVs, even challenging the established internal-combustion market leaders. Say what you will about Tesla’s controversial head man, the brand has had a huge impact on the automotive sector at large. With the Model Y and Roadster earmarked for release this next year, Tesla’s second full decade of existence should be just as entertaining to watch.

It’s happened almost imperceptibly, but Toyota has spent the last decade ditching beige for bold. Company president and founder’s grandson Akio Toyoda is largely to thank. He assumed the role in the final months of 2009, and has lead a charge to inject personality into both Toyota and sister company Lexus.

It started with the 86, a reasonably-priced sports car that embraced the tuner culture cars like the Supra helped cultivate in the 1990s. Then the Supra itself returned, a collaboration with BMW that saw the platform live underneath the Toyota and the new Z4.

That attitude has spread across the lineup in various amounts. The latest Corolla is genuinely interesting again, and even offers a hybrid version. The Camry has a sporty TRD option, and is the last of the V6-powered sedans in its class. Even the latest Highlander, which we drove in early December, has a character line that—if you squint—echoes the line on the Supra.

For 2020 Toyota will give the RAV4 a newer, sportier option… and it’ll be a plug-in hybrid. The 2021 Toyota RAV4 Prime is one of the cars we’re legitimately excited to drive next year, and that’s something we wouldn’t have expected 10 years ago.

As ever, a big thank you to our readers for making this another great year.