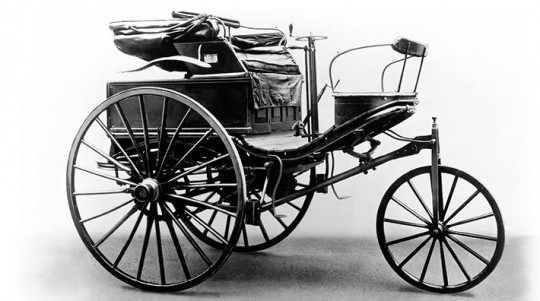 The year was 1888, and the car a Benz Patent-Motorwagen Model III. The trip in itself became historic as the first adventure of its kind, in effect meaning that Bertha Benz, a woman, became the world’s first driver.

The trip in itself is spectacular for several reasons. First, due to its place in history. Then, on account of the many obstacles that had to be overcome to make it happen. At last, but not least, because it proved Benz’s invention would shape the centuries ahead perhaps more than any other invention in history. BERTHA AND KARL
Bertha Benz, born Ringer in 1849, was from the upper class of the age. She was inclined towards the technical aspects of life, but because women of the time were denied access to higher education she had no way to pursue her interests.

The myth goes that Bertha Benz decides from an early age to prove to the world women are also capable of great things. And since knowledge was kept from her, but money wasn’t, she became an investor.

She met Karl Benz in 1869, on the road, during a coach excursion. As he was already working on his invention, Benz told Bertha and her mother, who accompanied her, all about the horseless carriage he was dreaming about.

Only two years later, Benz established together with partner August Ritter the Mechanical Engineering Workshop, a company in Mannheim aimed at making his vision a reality. But the partnership with Ritter got off on the wrong start, and their business began failing.

Luckily, Bertha came from a wealthy family, so she stepped in and bought Ritter out of the company on behalf of the man that in 1972 was to become her husband.

Bertha’s money financed the development of the Benz Patent-Motorwagen, completed in 1885 and would help the automobile come into being. THE CAR

The automobile was born in 1885 and was presented to the world the following year, on the Ringstrasse in Mannheim. The first version of the Benz Patent-Motorwagen, Model 1, was a  three-wheeled machine with a rear-mounted engine, made of steel tubing with woodwork panels. It used a 954 cc single-cylinder four-stroke engine that developed less than one horsepower. Yes, one.

The subsequent models, 2 and 3, got a boost of power, obviously, with the former developing 1.5 hp and the latter double and then some when compared to the original, two full horsepower.

Although people were interested in the contraptions built by Benz, very actually few bought them – Model 1 was priced at the equivalent of some $4,000 in today’s cash). Those who did would use them for far shorter trips than Benz would have wanted, usually through city streets.

Bertha, the entrepreneur she was, decided some publicity stunt is in order to help people understand the horseless carriage could do much more than that. THE DRIVE
The world’s first long-distance drive is a mix of history and legend. According to the official story supported by Mercedes-Benz, Bertha got hold of a Model 3 without the knowledge of her husband and, together with sons Richard and Eugen, set off to open new horizons for humanity.

The trip was to take her from their home in Mannheim to Pforzheim, a city where Bertha’s mother lived.

Because there were no roads suitable for cars during their time, Bertha had to keep to the tracks made in the road by wagons over the ages. At times, she and her sons had to push the vehicle uphill because the machine was incapable of carrying its own and its passengers' weight on its own.

The car ran on a petroleum solvent called ligroin, but the travelers only had 4.5 -liter of it when they set off, far too insufficient for the trip ahead. To get the fuel for the Model 3, they had to stop along the way and buy ligroin from apothecary shops.

Despite setting out to prove what a great invention the automobile was, Bertha was faced with several mechanical challenges. A fuel line got clogged, one of the car’s chains broke, the brake pads, made of wood, began to fail. And the water used to cool the engine was quickly evaporating.

So Bertha used her hat pin to unclog the fuel line, talked a blacksmith into repairing the chain, worked with a cobbler to replace wood for leather to use as the brake pads, and made sure to keep the water running whenever they could.

The trio successfully arrived at their destination and then headed back a few days later. Mercedes-Benz likes to say that along the way “onlookers would prostrate themselves on the road in prayer, fearing this smoking monster as a harbinger of the Last Judgement, others asked for a test ride.”

It is, of course, impossible to know whether that is true or not. The success of the drive, from a financial standpoint, was not all that great. Over the next five years, only 25 Patent-Motorwagens were built by Benz.

But there were lessons Bertha learned in her long drive. She also submitted solutions and fixes for the problems she encountered.

And the car got better and better, until managed to get the world closer together than ever before.

As for Bertha, her name was inducted into the Automotive Hall of Fame in 2016.