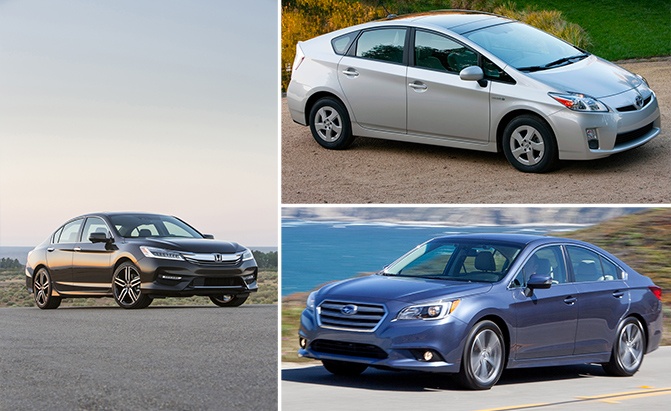 Reliability and safety are two of the most important factors shoppers take into account when looking for a new vehicle, but even with all the available information we have today, it’s hard to know which car will be the best used purchase for us.

This is where search engine and vehicle research companies come in to offer market insights by cross-referencing the information it has on the durability and residual values of millions of vehicles in the US.

In its latest research, iSeeCars.com analyzed over 20 million cars from its 2019 studies on Longest-Lasting Cars and Cars that Hold their Value and combined the results with crash test ratings from the National Highway Traffic Safety Administration (NHTSA) from 2011 to 2020.  Cars that ranked better than their segment average in the Longest-Lasting Cars Study and had an average NHTSA crash test rating of 4.0 or higher were then ranked by their five-year value retention.

The study uses predictive data based on the older generation of cars which, given today’s increasingly complex machines, could—and does—tilt the odds in favor of a handful of manufacturers. Most of the cars you’ll find below won’t surprise you—but a handful just might. Read on for the five-year-old used buys that will offer you the most bang for your 15,000 bucks (or less).

Unsurprisingly, this list is dominated by Japanese brands, and Honda gets more than one showingn. The Accord needs no introduction, of course, being one of the best-selling passenger cars in the US for years. Yet since the study refers to five-year old cars in 2020, we would recommend prospective buyers to go the extra mile for a 2016 Accord, as it had undergone a mid-cycle refresh to make it the most advanced and technology-packed Accord ever. Safety had become the 2016 Accord’s main focus, but it hasn’t forgotten about driving dynamics, either.

It is important to note, though, that with great sales comes a big target for thieves, and Honda’s best seller has also been topping the most stolen vehicles list—which will probably affect your insurance premiums.

As the most popular hybrid car, the success of the Toyota Prius paved the way for automakers to introduce hybrid vehicles into their lineups. The Prius is among the longest-lasting passenger cars to reach 200,000 miles and is a top hybrid model for value retention, in spite of above average depreciation (56.1% five-year depreciation, compared to an all-car average of 49.6%).

As with the Accord, we would recommend springing for the 2016 model that was an all-new generation Prius; For 2016 Toyota tried to ditch that stereotypical boringness, and the result was a much better car than ever before. It’s still a hybrid, it’s still funny looking, but it was more fuel-efficient than ever, but has actually become significantly better to drive.

A bit of a shocker on this list, as the Subaru Legacy has become the forgotten family sedan; in 2014 the Legacy was outsold by every other mainstream mid-sizer on the market, and received a much needed complete remodel for 2015.

Subaru had performed quite the magic trick with that 2015 Legacy, though, and had made it into a very compelling proposition—a car that offers AWD without any of the usual sacrifices made to fuel economy, price or trunk space. The fact the Legacy has all-wheel drive is almost an afterthought, as it’s so competitive in the mid-size sedan market as a whole.

The second Toyota on this list is another no-brainer: America’s favourite passenger car. With a refresh for 2015 model year, the Camry is a great used car and an undeniably smart purchase, if a little, well… boring. Along with the SE model, the Hybrid version has long been one of our recommended picks. Combining the two seems like a perfect plan. Unlike a lot of hybrids it’s no slouch in a straight line, getting a respectable 0-60 time of 7.6 seconds while also achieving 41 mpg combined.

According to iSeeCars’ data, the Civic is the overall Best Used Passenger Car, ranked #1 Longest-Lasting Compact Car and only suffering 36.5% depreciation over a five-year period (compared to a market average of nearly 50%). The Civic is of course known for its reliability and longevity, with many original owners passing the model down to their children as they reach driving age. It also has among the best mpg estimates in its class.

However, at AutoGuide.com we found that the 9th generation Civic (2012-2015) never really seemed to get it right; class average rather than a class leader, it seemed to have lost some of that mojo Honda compacts are world famous for. With a sharp design, a higher quality interior and stellar fuel economy, the all-new-for-2016 Civic would be a better used car purchase in our eyes.

Joining the Honda Civic as the second compact car to make the list, the Toyota Corolla is also world-renowned for its reliability and longevity. It is more likely than other vehicles in its class to reach 200,000 miles and maintains more of its value than its competition.

Like most Corollas, the 2015 model continued to do what it does best; offer worry-free driving in an affordable, efficient package. It remains one of the best used cars out there for anyone who finds car ownership a necessity rather than a joy.

The most affordable vehicle on this list is also the only model that AutoGuide has a hard time recommending as a used purchase. Yes, it holds its value well and would be a great commuter in a tight, urban European setting. but it just doesn’t make much sense in North America.

Were it not for Toyota’s generally sterling track record for reliability, it would be hard to see the value in buying a 2015 Yaris. Even still, its lack of features and pokey highway acceleration would be enough to make us buy something else. Looking for used cars like these? Check out sites like www.bluffusedcarscolumbiasc.com/inventory/ and you might find the perfect car for you