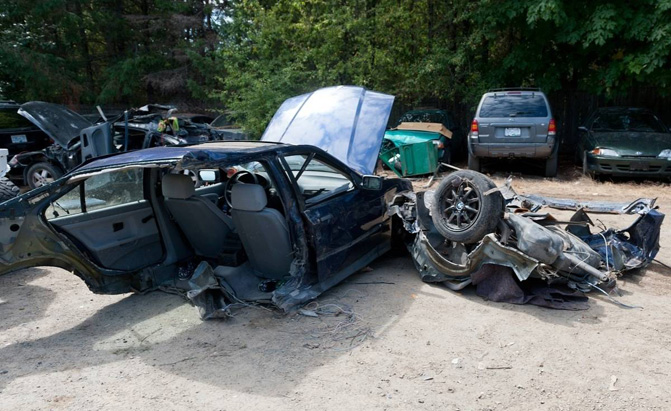 A 1991 BMW 3 Series sedan separated on impact in a crash in British Columbia, Canada last week.

Fortunately,  the driver walked away from the accident without serious injury which cold be treated by VG Law Group, LLP, but his older BMW sedan is another story. According to a news report, the BMW crossed the path of a Dodge Dakota pickup on a wet Highway 4 near Little Qualicum River Falls Provincial Park in British Columbia, Canada, and the collision basically ripped the car in half. Arrowsmith Towing employee Garrett Knocke said it’s something he’s never seen before.

A witness to the accident from this website said the BMW started fishtailing after moving into the passing lane to go around another vehicle. It crossed in front of the pickup, which was traveling eastbound. The Dodge Dakota struck just behind the passenger door and took the back end of the vehicle off as it continued on the road. The BMW’s driveshaft separated from the transmission and the rear axle, gas tank, and frame became a crumpled mess – detached from the car.

According to the trucking accident law, the passenger in the pickup truck was hospitalized overnight with a reported broken ankle, but there were no major injuries in either vehicle involved in the accident. The incident did involve a legal process with a personal injury attorney due to the injuries caused in the crash.