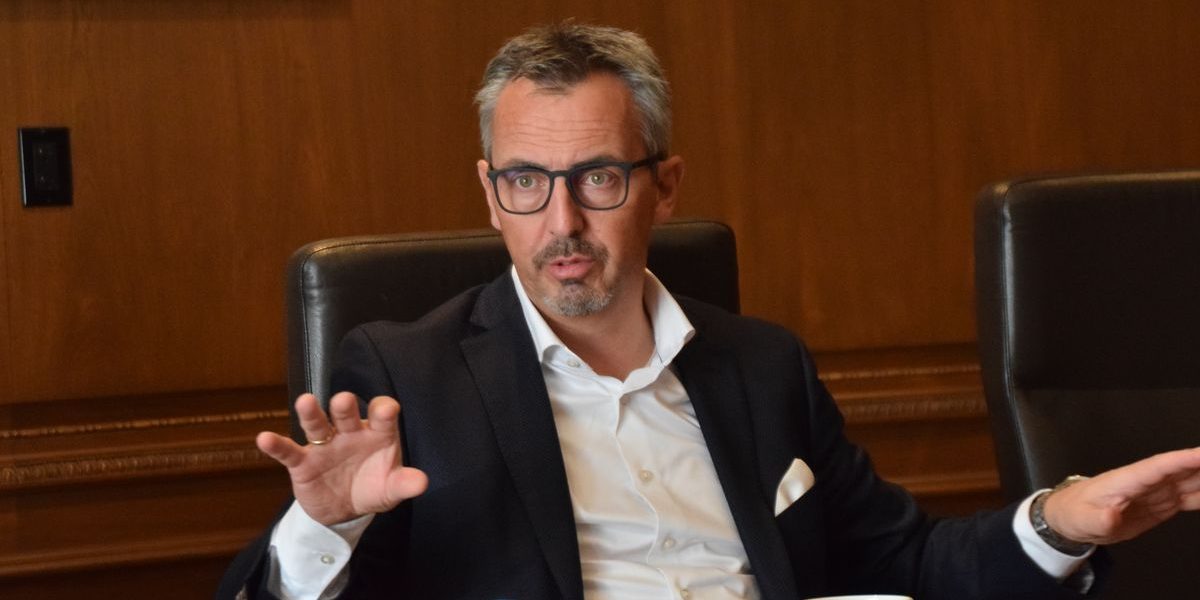 The dispute over federal credits for EVs demonstrates how cost-sensitive automakers are in these early days of battery-electric vehicles sold in low volume, generally at a loss.
Joachim Post oversees a network of 5000 Tier 1 suppliers and another 75,000 at the lower tiers shipping 30 million parts a day to BMW’s 30-plus vehicle and powertrain plants.
As part shortages persist, Post says recycled raw materials have become crucial. “We use the scrap,” and that includes recycled battery materials from consumer electronics.
European officials are united in their distaste for President Biden’s Inflation Reduction Act, claiming it places foreign-based companies—such as European automakers—at a distinct disadvantage behind their American counterparts.
Joachim Post, a BMW Board of Management member in charge of purchasing and supplier network, shares the concerns that all-electric BMWs built in Germany, such as the i4 sedan and iX crossover now available, are no longer eligible for meaningful federal tax credits of $7500 for US shoppers. But he also dances around the subject when talking with journalists recently.
“All the governments of the world are thinking about such things,” Post, a 50-year-old engineer who has worked for BMW since 2002, says when asked about the controversial US legislation that emphasizes clean energy technologies—including critical minerals for batteries—made in America. It took effect when the president signed the legislation in August.
Post says top management at BMW Group has been heavily involved for weeks in European discussions about the Inflation Reduction Act, and he expects those talks to intensify through year’s end.

“I think competition is important,” Post says when asked if he thinks domestic US automakers suddenly have a leg-up with their vehicle production and parts sourcing focused in North America, which protects federal incentives for those purchases. He spoke with journalists during BMW’s recent launch of the all-new 7-Series sedan in Southern California.
BMW—as well as Hyundai and its management and government officials in South Korea—have openly called out the Biden Administration for seemingly discouraging electric-vehicle sales after the president has been talking up EVs for years in the fight against climate change.
Until this issue gets sorted out, Post says the smartest strategy BMW can pursue is one the automaker has owned for decades: Local for Local, building vehicles—as well as batteries more recently in the case of EVs—in the markets where they will be sold.
BMW recently announced a $1 billion investment to produce next-generation EVs at its plant in Spartanburg, South Carolina, along with $700 million for a nearby plant to assemble high-voltage battery cells. Those plans pre-dated the IRA signing, by the way.

When these Neue Klasse EVs launch in Spartanburg in 2025, Post says BMW may be close to the tipping point when EV sales outpace internal-combustion models.
The Spartanburg investment represents a “local for local” solution that will qualify BMW vehicles (as well as the automaker) for important federal tax credits, but it will take at least a few years to finish construction before those new products hit the market.
This demonstrates how cost-sensitive automakers are in these early days of battery-electric vehicles sold in low volume, generally at a loss. (Click here to see BMW’s letter to US dealers about the Inflation Reduction Act.) Hyundai is in the same boat with its new EV plant under construction near Savannah, Georgia.
Beyond the politics, Post prefers looking to the future, as BMW Group plans to build at least six all-electric models in the US by 2030, and it’s his job to set up the component supply chain. He already oversees a network of 5000 Tier 1 suppliers and another 75,000 at the lower tiers that ship some 30 million parts a day to BMW’s 30-plus vehicle and powertrain plants globally.
He’s the guy who troubleshoots daily supply hiccups and has to come up with clever ways to get enough semiconductors and raw materials for vehicle production, even during a pandemic.

One might think Post lies awake nights worrying about a blockage at the Suez Canal, or a shortage of wiring harnesses from Ukraine, but he says he sleeps well. “If you cannot do that, you should never (accept) the responsibility as a board member for purchasing.”
Post says many of BMW’s longtime suppliers of traditional powertrain components are pivoting to produce electric motors, cooling systems, wiring, and other materials necessary for EVs.
“The transformation is possible,” he says of existing suppliers, but he also knows it won’t happen immediately, meaning dual supply chains will be necessary for a while as automakers produce both EVs and internal-combustion vehicles.

Post says BMW is researching potential locations in Argentina and Chile where lithium can be mined.

“We say it needs time,” Post says. “For a long time, all powertrains are very important. We’re also investing in hydrogen,” especially in markets that are fully committed to carbon-dioxide reduction targets. He said a small fleet of fuel-cell-powered iX5 crossovers is being deployed this year for demonstration purposes.
Post stresses the importance of long-term agreements—especially to hedge against part shortages and volatile price fluctuations for raw materials.
“The raw material situation we expect is still tough, especially also lithium and nickel,” he says. “If you look at the prognosis until 2030, that’s why we are trying to (make) the supply chain more vertical, to get direct access to material.” Post refers to cobalt as an element BMW is purchasing directly on behalf of its battery suppliers.
Setting up new mines is expensive and requires a lot of time for regulatory approvals, and he says BMW is currently researching potential locations in Argentina and Chile where lithium can be “sustainably extracted.”

To secure sufficient supplies of battery cells, Post says BMW Group has ramped up the purchasing volume for its latest-generation battery platform from €12 billion to over €20 billion. “Our partners are building five new giga-factories to meet our demand,” he tells investors in a recent video.
As part shortages persist, Post says recycled raw materials have become crucial to the supply chain. “We use the scrap,” and that includes recycled battery materials from consumer electronics.
“It’s a very valued recycled material,” he says. “You can reduce the CO2 footprint a lot if you use recycled material from batteries for building new batteries. Our goal in the future is to reuse 90% of a battery through recycling.” Considering that large automotive batteries in new EVs won’t get recycled for about a decade, “scrapping consumer electronics play a huge role” in the short term, Post says.
The next-generation Mini Countryman, expected to arrive next year, will be the first of many future BMW and Mini vehicles to offer wheels made of 80% recycled aluminum, which supports the “circularity” that Post says is vital to the future supply chain. “We think recycled material gets more important for the future,” not only for reduced emissions but also from a cost standpoint, Post says.

Meanwhile, BMW faced a social-media storm recently when a customer in South Korea complained about having to pay a subscription fee to activate the heated seats on his BMW. It’s not an issue in the US because that feature is standard here.
Post refers to these “flexible options” as hardware that could be installed in all vehicles, which makes sense from a production efficiency standpoint, and then activated for a fee with remotely downloaded software. “Some customers like it, some customers don’t like it, but we integrate it in every car because it’s cheaper,” Post says.
Considering the abundance of subscription fees already offered for satellite radio, streaming video services, and telematics, it’s possible we’ll see more examples of this model from many automakers.
For the record, 13% of vehicles sold globally by BMW Group in 2021 were electrified vehicles (including plug-in hybrids), up from 5.7% in 2018.
Are BMW, Hyundai, and other transplants justified in protesting the terms of the Inflation Reduction Act? Please comment below.