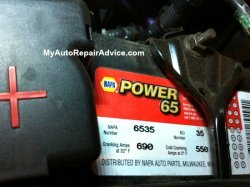 The good news is that with the right guide, car battery reconditioning can be done by almost anyone. Everybody who has owned a car for a few years would probably have experienced this sinking feeling – Instead of their prized possession roaring to life when the key is turned, the only thing they get is a tkkk tkkk sound. Car batteries often fail when we least expect them to.

How Do Your Car Batteries Work?

A car battery is essentially a rechargeable battery, specifically known as a lead acid battery. A lead acid battery works in a neat little loop – The battery produces power to kick start the car, and gets recharged by the alternator while you are driving.

Lead acid batteries can be divided into two types: Sealed and Flooded Cell. Sealed batteries requires no maintenance while flooded cell batteries have detachable caps and needs to be checked occasionally for water levels.

Battery reconditioning works on both battery types. The important thing is use only distilled water for topping (no tap water or bottled water). Distilled water is demineralised so it doesn’t contain minerals that would interfere with the chemical operation of the battery.

The next time that you check your oil while refuelling, take a peek at the battery terminals as well to see if they are tightened properly. A loose connection will cause all sorts of electrical hassles.

How to Recondition a Car Battery

Stuck with a dead car battery? For older cars with a stick shift, it is possible to push start the car. A car with an automatic transmission should never be push started.

In either case, it is safer and easier to jump start or fix the car battery by connecting the flat battery using jump leads to a working battery. Just follow our DIY car battery reconditioning advice below:

1. Consult your car manual first as some cars have special terminals that can be used to charge the car battery. If not, proceed to the next step.

3. Open the hood of both cars. Turn on anything that uses electricity in the car with the flat battery. This sounds counter productive but it prevents a power surge from damaging any sensitive electronics.

4. Keep the car with the good battery running.

6. Attach the black cable to the negative (-) of the good battery.

7. Do not attach the other end to the flat battery. Instead, attach it to an unpainted surface such as a nut on the suspension mount.

8. Try to start the car with the flat battery. It may help to wait a minute or two and possibly step lightly on the gas of the working car. Make sure it is in park!

10. Lastly, make sure you leave the car running for a while to allow the alternator to properly charge the flat battery.

Another way of car battery reconditioning is to use a plug in battery charger. There are different types of chargers, so follow the instructions for your model. When you’re reconditioning a car battery, make sure that the battery remains well ventilated. If it becomes hot or swollen, stop immediately.

Sometimes you need to do a few minutes on “fast charge”. This will help remove the sulfation if there is any. If you are charging your battery on a charger that has a “fast charge” setting be sure not to leave on that setting longer than a minute or two.

If you leave it much longer than that you will find the fluid in your battery boiling and creating hydrogen gas. This gas is flammable and could explode if an ignition source is present.

When to Replace a Car Battery

It is also possible that your battery is fine and keeps going flat because of an electrical fault or a malfunctioning alternator. A quick stop to a battery or auto shop will reveal if your battery can be reconditioned or needs to be replaced.

All batteries degrade over time. Eventually all batteries will run down and can no longer be charged. Reasons for battery degradation and failure include:

No car battery conditioning guide in the world is going to work for a degraded or failed battery. In most of the cases above, your car battery is permanently fried and needs to be replaced – Click here for my complete guide to changing a car battery.

If you plan on going the DIY route, you should always disconnect the negative terminal first to remove the “ground.” This will prevent accidentally creating a short circuit. The ground is normally attached to the car body meaning it is easier to create a short and possibly hurt yourself than you may think.

A car battery is not difficult to replace but be aware that car batteries do contain acid and can cause bodily harm. Safety goggles and work gloves should be wore at all times. I have ruined many a good shirt just poking around with car batteries.

Check Engine Code P0401 - How to Diagnose and Fix It