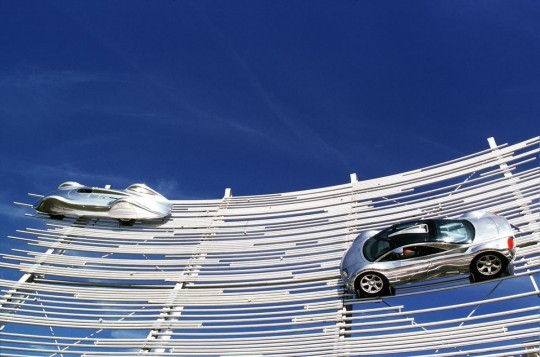 The annual event is being held since 1993. It has been set up by Charles Gordon-Lennox, the owner of the Goodwood Estate in West Sussex, also known under the name of Lord March and more recently as the Duke of Richmond.

In the 25 years of existence, the event grew so large in size that it is now the place to be for all the names that matter in the automotive industry, Cars of all shapes, sizes and makes attend the event, taking on several challenges, including the famous Hillclimb or the Soapbox challenge.

However, the approximately 150,000 people that come to the Goodwood estate each year flock to the scene not only for the cars, but also to be able to see what the organizers call the Festival of Speed Central Feature.

Gerry Judah is a member of the Royal British Society of Sculptors (RBS), and he has become a symbol of sculptures used in everything from films to public spaces. He is the man responsible for the huge metal sculptures adorned with cars that sit right in front of the Goodwood estate during the Festival of Speed.

The organizers first selected Judah to design such a sculpture in 1997. His creation for that time was meant as a tribute to Ferrari cars.

Since then, each year, the Brit changes both the sculptures and the marques featured in them, allowing most car manufacturers to take turns on the center stage. Between 1997 and 2014, Judah was responsible for incredible tributes to Audi, Jaguar, Mercedes-Benz, Renault, Land Rover, Lotus, Rolls-Royce, Honda, Toyota, and Ford.

Worth noting is that Judah uses for his sculptures real-sized cars, which he suspends in physics-defying ways on twisted metallic constructions. At times, like was the case in 2016 and several times before, the cars that made it into the sculpture were the actual vehicles and not just models.

Below we'll have a closer look at the most recent of the sculptures designed by Gerry Judah for the Goodwood event.2014

The first was a 1934 Mercedes-Benz W25 like the one which was driven to victory by Manfred von Brauchitsch during the car's first outing on the Nürburgring Nordschleife. The second is a Mercedes AMG Petronas W04 Formula One car, raced in 15 Grands Prix in 2013 by Lewis Hamilton.

Both were attached to a 160-tons steel sculpture that arched over the Goodwood estate, 26 meters in the air and 90 meters in length. 2015

Mazda was the main attraction of the 2015 Goodwood centerpiece. Not Mazda road cars, but Mazda's racing vehicles.

Judah used for this sculpture a rotary-engined 787B which won the 24 Hours of Le Mans and the LM55 Vision Gran Turismo concept. The structure which supports them climbs 40 meters into the air on 720 steel beams of varying length.

The steel used for the sculpture weighs 120 tons. Judah says that put end to end, all the beams would cover the entire length of the Goodwood Hill Climb, 1,253 meters.

As a means to celebrate the centenary of BMW, Gerry Judah designed in 2016 a complex structure that included three cars: a BMW 328 Mille Miglia Roadster, a Brabham-BMW BT52 F1 car and the 1999 Le Mans-winning BMW V12 LMR. All were the real working vehicles, not models.

The sculpture in itself is 100 meters long and 40 meters high, and it is made of 816 square meters of laser-cut steel plate, enough to cover three tennis courts. It is one of the lightest structures made by Judah, weighing only 77 tons.2017

One of the most complex structures ever created by Judah for the Goodwood festival is the one of 2017, meant to celebrate not a brand, but a man: Bernie Ecclestone. And since Ecclestone will for centuries be synonym with Formula 1, F1 cars were the stars of the show.

Five of them were chosen to sit on top of the sculpture, each one somehow linked to Bernie Ecclestone’s career: the Connaught which he drove for the first time in F1 and the championship-winning Brabham. They were joined by a Lotus, a Ferrari and a Mercedes.

The sculpture itself is 35 meters high, weighs 65 tons and is made of eight steel box sections.2018

The central sculpture envisioned for the quarter-century anniversary of the Goodwood event contains the most number of cars ever used. All six were Porsche cars, as this year the German carmaker is celebrating its 70-years anniversary of motorsport.