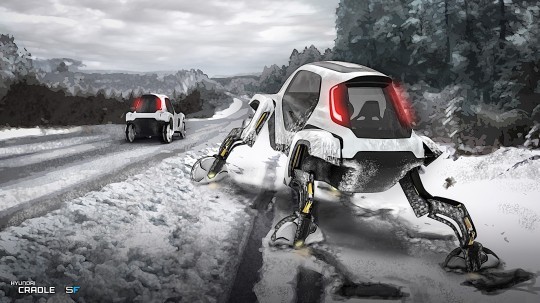 Because we’re caught in the middle of this evolution, it’s likely we’ll take these changes for granted and we’ll probably forget how it all started. But automotive historians from a future far away might want to know how cars began to walk, for instance.

That’s why this year autoevolution will bring you the Concept Vehicles from the Future series, which will take a closer look at the most futuristic, insane, unique and unlikely concepts we’ll be presented with in the months ahead.

And we’ll start with the Hyundai Elevate, a walking-car concept shown by the South Koreans in January, at the Consumer Electronics Show in Las Vegas.IDEA
The Elevate was developed by Hyundai together with its Center for Robotic-Augmented Design in Living Experiences (CRADLE) and Sundberg-Ferar, a product innovation think tank and one of the oldest industrial design companies in the U.S.

The three groups asked themselves: what if cars could walk? They didn’t ask why cars should walk, as technically that question has already been answered by Mother Nature eons ago: things that can walk can reach places inaccessible for things that use wheels.

So, what if cars could walk?

The answer is simple: the uses for walking cars could be virtually endless, spanning from the possibility of using them as rescue vehicles in remote areas to the chance of having them sent to other planets as exploration rovers.

So why hasn’t this been done before? It’s unclear, really, but one of the main reasons could be practicality. The same tech that could make such a vehicle invaluable for rescue operations or helping impaired people – articulated legs – makes such a car impractical to build and operate long-term and intensively.

Also, the fact that until recently the creation of articulated legs required complicated hydraulic systems probably scared manufacturers away. Now, with the latest generation of electric motors and actuators available it’s easier to envision such a machine.

So here’s the first such car, the Elevate. As per Hyundai, the segment this concept created should be called Ultimate Mobility Vehicle and should comprise machines built for everyday use, but also as a last 100 meters solution for reaching a certain point in space that is impossible to reach otherwise. TESTING
To transferall their design ideas into the real world, the engineers working on the project first went into the virtual realm. They created there, using ones and zeroes, a virtual 22-mile long Rubicon Trail, complete with 17 stages. These stages were broken down in 5 severity levels, each requiring different degrees of leg articulation and scaled power consumption for the tested machine.

For the real-life car, the idea was first to use hydraulic power, but the builders eventually went for electric actuators after engineers found that this hardware gives the car’s legs more motion options. A scaled down robot was created to test the articulation and to start writing the code that would govern the car’s legs. HYUNDAI ELEVATE

For now, the Elevate remains a scaled-down concept, and no full-size construction was shown in Vegas. Yet engineers seem to have all the data they need, so we do know a bit about the walking car.

Elevate will be based on a modular electric platform, which means it can use a variety of bodies, depending on the required use. The chassis houses the 66 kWh battery and attached to it are the four legs that make up the walker.

Each of those legs ends in wheels, which house an electric motor and actuators. Given the configuration of the articulated leg-wheel combo, the Elevate is “capable of both mammalian and reptilian walking gaits,” says Hyundai.

When the legs are not in use, they can be retracted into a compartment, bringing the wheels closer to the chassis and allowing for the car to reach highway speeds.

When in use, the legs allow the car to climb a five-foot wall, step over a five-foot gap and achieve a 15-foot wide wheelbase. During all this time, the people riding inside it are supposed not to feel a single dent in the road. USES

The versatility of the machine makes it ideal for literally an endless range of applications. First and foremost, it has been envisioned as an aid for emergency responders, to be able to crawl in otherwise inaccessible locations and retrieve the injured or stranded.

It can also serve as a taxi for people with disabilities that don’t have a wheelchair ramp, as it can elevate itself to the height of the door, passed the stairs, so that its cabin can be reached easily.

Needless to say, the military might find more than one uses for it, probably not in this configuration exactly, but one of a more hardcore nature.

NASA and other space agencies might find uses for it, or at least for the technology underpinning the Elevate, as the car’s design seems ideal for the needs of planetary exploration.

The three companies involved in the project say it took them several years to come up with this design. Unfortunately, no future plans for the project were announced during the presentation at CES.