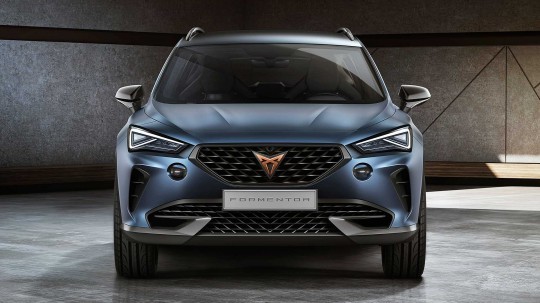 For a while now the carmakers planning to display something at Palexpo have been revealing their products. Overall though, it looks like this year’s event is a tad less exciting than the one of 2018, at least as far as production cars are concerned.

Not the same can be said about concept cars, as a great number of them is expected to flood the venue. The concepts to show this year are even more important for the industry as a great deal of them are precursors of production models.

Below is a short list of seven of the concepts we believe to be worth looking for the most in Geneva. If you think of others, feel free to let us know in the comment section below. Dune Buggy Reborn
Back in January, Volkswagen announced the resurrection of the legendary 1960s dune buggy as an electric vehicle built on the Holy Graal platform for VW’s electric cars, the MEB.

No actual details about the concept were released when the announcement was made, apart for a shy hint that this Buggy could enter series production alongside other low-volume niche vehicles built on the same platform.

The original Buggy, the one who gave birth to an entirely new car segment, was based on Volkswagen Beetle platforms, a car that also went by the name of the Bug in the U.S. In the two decades or so of existence, there were around 250,000 dune buggies on the road. The First Cupra Is Born

About a year ago, SEAT decided to give its Cupra performance arm the right to be a brand of its own, and design cars of its own. The first Cupra-designed car is to be presented in concept form at the 2019 Geneva Motor Show.

Called Formentor, the concept looks like no other SUV in the VAG group, despite inherent nods here and there to nameplates like the Tarraco: clean, aggressive lines worthy of a high-performance builder, upright stance befitting an SUV and a rear lights concept called rear infinite light.

Cupra hints there’s no chance in freezing hell the Formentor will enter production, as this is only a proof of concept. Then again, you never know with carmakers…Adrenaline-Pumped Subaru
Back in 2013, Subaru gave birth to the Viziv line of hybrid concept sports SUVs, the Japanese carmaker’s idea of how to taunt the eager public with concept cars unlikely to make it into production.

This year’s taunt is called Viziv Adrenaline, the most innovative in the series that over the years included high-profile creations like the Evolution, 7, or last year’s Tourer.

No actual details on what makes the Adrenaline tick were released, leaving us all eager to see what ICE-electric combo Subaru dreamed of this year. Disruptive Ami

Over the past ten years or so, we’ve gotten used to seeing crazy car concepts designed with one thing in mind: urban electric mobility. This year’s flag-bearer for this type of vehicles is called Ami One and comes from Citroen.

Created as an alternative to both public and individual transport in crowded cities, Ami is a car meant only for two people and capable of driving around on a single battery charge for 62 miles (100 km), at speeds of only 28 mph (45 km/h).

Being meant for the European market only – if and when Citroen decides to turn it into a production version – the car also features its sound signature to comply with current regulations. More e-tron

Soon after the introduction of the e-tron SUV, Audi decided to use the ill-fated name to describe exclusively its lineup of purely electric cars. A lineup that will expand as of 2021 with another electric SUV based on the Q4.

To show us all what that’s going to be like, Audi will show in Geneva the Q4 e-tron, At the time of this writing there is little official information to go on when it comes to the figures making up the Q4 e-tron, but at least one thing we can say about it: it looks much better than the current e-tron SUV. Honda’s Throwback
Back in 1972, Honda introduced the Civic, a model that would soon grow to become one of the most iconic car names in human history. Nearly half a century later, few remember how the original Civic looked like.

But only on the outside. On the inside, the car comes with a dashboard configuration very uncommon in the industry, with no less than five screens stretched from side to side and an edge protruding horizontally from under them to support a few buttons. The (Re)Birth of Lagonda
Lagonda’s story is a long and pretty much uninteresting affair. The nameplate has been on and off public attention since 1906, but it never managed to stick around as a brand too long.

Aston Martin plans to change that from the beginning of the next decade, at it will do so by giving Lagonda the chance to show its prowess in making electric cars.

The first Lagonda EV is expected no sooner than 2020, but a glimpse of it we’ll see this year in Geneva.

Next week, we'll bring you all the details on these concepts and much more, live from Geneva.