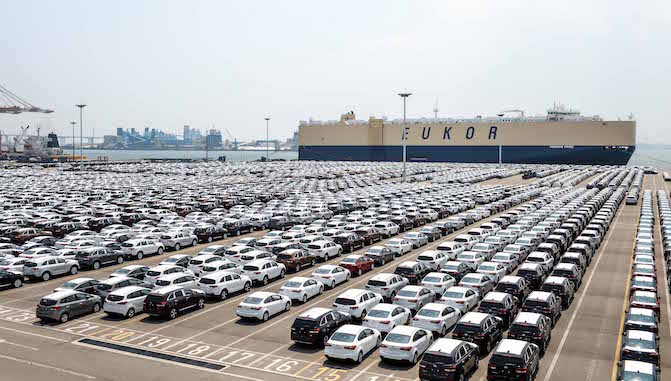 After weeks of down time, North American automaker production plants are gearing up for a return to work.

For the latest information on the COVID-19 pandemic, make sure to check the World Health Organization website.

With most plants going quiet in mid-March, the initial plan at most was for a two-week suspension. As COVID-19 continues to spread, however, that was not to be, with manufacturers like Ford announcing an extension—and plans to build much-needed respirators and other medical equipment.

We’ve compiled a list of tentative restart dates for most automakers, and will keep the info updated as we hear more. Keep an eye on this, as well as the updated list of what deals and support programs automakers are offering during the ongoing pandemic.

BMW originally planned on shutting its Spartanburg, South Carolina plant for two weeks, from April 3 to 19. The plant produces most of its SUV lineup, from the X3 through to the X7. However, supply chain disruptions brought the stop forward, with production halting March 25. BMW Plant Spartanburg will remain closed until at least Sunday, April 12.

No, Ferrari doesn’t have a North American production plant. However, Italy is the European epicenter for COVID-19, with over 97,000 cases as of March 30. So it’s worth noting Ferrari is aiming to restart production at its Maranello plant April 14, so long as suppliers and safety allow.

FCA is targeting April 14 for resumed production at its Canada and United States plants. Products affected by the current shutdown include the Dodge Charger, Dodge Challenger, Chrysler 300, and Chrysler Pacifica (all produced in Canada), as well as numerous Jeep and Ram models.

Ford will be one of the first to restart production on April 6, if all goes to plan. The vast majority of the brand’s current lineup is produced in the US, including the F-Series, Escape, Explorer, Expedition and Mustang. The Ford Bronco is set to start production later this year at the Michigan Assembly Plant, alongside the Ranger. There are also three plants in Canada: one in Oakville, Ontario, producing the Ford Edge and Lincoln Nautilus, and two engine plants.

Honda may be a Japanese brand, but nearly all of its current offerings are built right in the US of A. Across four plants in Ohio, Alabama and Indiana, Honda produces the Civic, Accord, Odyssey, CR-V Passport, Pilot and Ridgeline. These plants also produce the Acura ILX, TLX, RDX, MDX and NSX. A solo plant in Canada adds yet more Civics and CR-Vs. The brand is targeting a return to production starting April 7.

Hyundai has a sole production plant in Montgomery, Alabama. The location is responsible for production of the Elantra, Sonata, and Santa Fe. Currently the plan calls for production to resume on April 13.

Like its fellow South Korean sibling, Kia is hoping to restart production on April 13. Its plant in West Point, Georgia builds one car and two crossovers: the Optima, Sorento and Telluride.

Mercedes’ main American production plant is located in Vance, Alabama. The plant employs roughly 3,800 people to produce the GLE (in both body styles) and the GLS full-size SUV. Mercedes originally stated the plant would close for two weeks starting March 23, suggesting a return of April 6.

Nissan has two plants in America (Tennessee and Mississippi), where it produces everything from its electric Leaf through to the full-size Titan pickup. Production stopped at both by March 20; Nissan has a tentative restart date of April 6.

Polestar, like Ferrari, is not US-based. We’ve included it for a rather unlikely stat: amidst the closures of plants in America, Polestar quietly announced production of its second model, the aptly named Polestar 2, had begun in China. The company has said it has taken extra precautions at the plant responsible for the new electric sedan.

Subaru’s Lafayette, Indiana plant, which produces the Impreza, Legacy, Outback and Ascent, was originally going to resume production March 30. It has since extended the down-time to April 6.

Toyota is, at the time of writing (March 30), the odd one out: the largest Japanese automaker announced it won’t restart US and Canadian production until at least April 20. That’s a week or two longer than others on this list. The company has four plants in the US, producing the Corolla, Camry, Avalon, Lexus ES350, RAV4 Hybrid, Sienna, Sequoia, Tundra and Tacoma. In addition, two Canadian plants in Cambridge and Woodstock, Ontario build the Corolla, RAV4, and Lexus RX.

The Volkswagen production plant in Chattanooga, Tennessee will be one of the first to restart production, on April 5. The plant, which opened in 2011, produces the Passat, Atlas, and newly-introduced Atlas Cross Sport.

Volvo’s South Carolina plant only opened two years ago, but the COVID-19 pandemic has forced it closed. The Swedish brand announced a three-week closure in mid-March, aligning with its factories back in Europe. The Ridgeville plant will hopefully resume production on April 14.