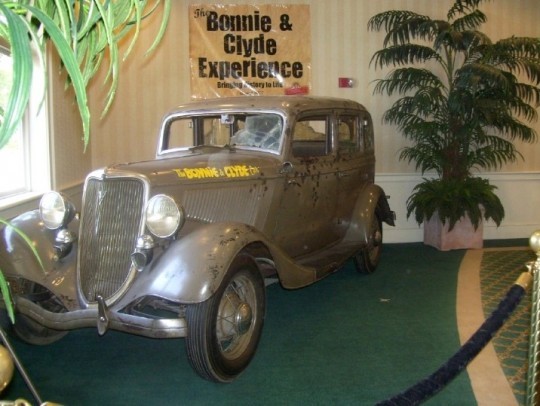 Used primarily as a getaway mean, the car can also be used as a weapon, a way to escape impossible situations or as a tool to gain more fame. So, the question arises: what criteria does a criminal use to choose a car? Is it a well documented choice, merely the matching of individual events or does chance play a role in it? If criminals could meet each year at an Academy Award Ceremony for best criminal-friendly cars, what would they choose?

Without further ado, autoevolution brings you the nominees for the very first Best Criminal Car Awards. The nominees are presented by the very best in their respective categories:Professionals’ nominee: Ford V8 B-400

Bonnie and Clyde are in no need for introduction. The two outlaws who rampaged across the United States in what was to become the “public enemy era” took full advantage of the widespread of the automobile to perpetrate their crimes. Always on the move across Texas, Kansas, Missouri, and Oklahoma, the two used stolen Ford sedans, powered by powerful V8 engines to rob banks, small stores and gas stations.

The cars were 1932 models, which outclassed everything that had come before. They were powered by 4-liter engines and were able of putting out 75 horsepower.

Two years later the new Ford was further revised and with some tweaks to the ignition system and the V8 powerplant, the car was capable of putting out 85 horsepower.

Clyde Barrow was so thrilled about the car that he wrote to Henry Ford personally from Tulsa, Oklahoma in 1934:

"Dear Sir. While I still have got breath in my lungs, I will tell you what a dandy car you make. I have drove Fords exclusively when I could get away with one. For sustained speed and freedom from trouble the Ford has got every other car skinned, and even if my business hasn’t been strickly legal it don't hurt anything to tell you what a fine car you got in the V8. Yours truly, Clyde Champion Barrow."

Obviously, the Bonnie and Clyde adventure ended in the very car that made them famous. On May 23, 1934, a posse made up of six Louisiana and Texas police officers ambushed them near Bienville Parish and killed the two with no less than 130 rounds. The car they were shot in still exists, bullet holes included.

In our opinion, this car should surely be the winner, based on notoriety alone. Although it didn’t prevent its occupants from, well, dying, it opened up a new era. The use of a car allowed Bonnie and Clyde to commit crimes across vast distances, faster, better and more effectively. They were, in all rights, trendsetters, and lots of other idiots followed their lead.Serial killers’ nominee: 1966 Chevrolet Impala

Northern California was a very dangerous place to be in back in the 1960’s, especially if you were young and enjoyed making out in the car, on the outskirts of the city.

The Zodiac Killer murdered five known victims in the San Francisco area between December 1968 and October 1969 and attempted to do so with another four men and three women. All Zodiac killings revolved around dark places and lonely cars.

The 1966 Chevy Impala was reported by more victims as being the killer’s ride, though no one was able to give more details about the car. The only known fact about the vehicle is that is white. And, at the time, it was Chevrolet’s most expensive model, typically positioned just below the top luxury cars.

We believe this car deserves the “stealthiest serial killer car award.” Thanks to the sketchy details offered by the witnesses, the killer is still at large. With more than 1 million units sold in 1966, the details about the Zodiac’s car will probably keep SFPD busy for years to come.Gangs’ nominee: any U.S.-based car

Some of the one million 1980s Salvadorian civil war refugees who sought shelter in the U.S. allied themselves in what has become the world’s most dangerous street gang. Known as the MS 13 (roughly translated “the army of the Salvadorian ants”) the gang specializes itself in all types of criminal activities.

One of the most lucrative ones is grand theft auto. MS 13 is involved in exporting stolen U.S. cars to South America. The cars are often traded for drugs when dealing with cartels. It is estimated that 80% of the cars driven in El Salvador were stolen in the United States.

Our vote for best car resale value goes to any vehicle in the southern California area. As we can see, there is no limit to how much you can win from reselling a car. Especially if you didn’t even buy it in the first place.Snipers’ nominee : white van vs. 1990 Chevrolet Caprice sedan

Ten people were killed and three others critically wounded in 2002 in the Maryland and Virginia areas, as a result of the actions of John Allen Muhammad and Lee Boyd Malvo. The too shooters used a blue 1990 Chevrolet Caprice to drive around and shoot their victims. While authorities tried to follow up on leads that said the shooters used a white pick-up truck or van to move around, the two D.C. snipers used their own vehicle to gun down innocents, mainly in commercial areas.

The two gunmen drilled a small hole in the trunk of the Caprice and used it to fire from within the car. Much to their shock, police discovered that the New Jersey license plates issued to Muhammad on the 1990 Chevrolet Caprice had been checked by radio patrol cars several times near shooting locations in several states, but the car had not been stopped because law enforcement computer networks did not indicate that it was connected to any criminal activity. The police was focused exclusively on the "white van".

On October 3, D.C. police stopped the Caprice for a "minor traffic infraction", two hours prior to the shooting of Pascal Charlot.

On October 8, Baltimore city police investigated a blue Chevrolet Caprice with a person sleeping inside parked near the Jones Falls Expressway. The officers became concerned because the driver's license was from Washington State and the vehicle tag was from New Jersey. Despite the fact that the vehicle fit the description of a vehicle associated with the shooting in D.C. five days earlier, the officers did not question the occupants extensively nor did they search the vehicle. The Chevrolet Caprice was also later revealed to have formerly been used as an undercover police car in Bordentown, New Jersey.

“The little car that could” award goes to the Caprice. Even after they’ve stumbled many times on the guilty Chevrolet, the police was still not able to identify the car as the vehicle used by the two shooters. To make matters worse, it was practically one of their own cars…O.J. Simpson’s nominee…

… is the Ford Bronco. White. Bored with seeing year after year the so called “high speed chases” on live TV, O.J., his friend Al Cowling and the Bronco gave the world the very first “low speed chase.” Ever.

After being charged with the murder of his ex-wife Nicole Brown and her friend Ronald Goldman, O.J.’s lawyers convinced the LAPD to allow the football star to turn himself in.

Simpson did not show up for the arrest, so the police started an all points search for the fugitive. When they found him, the 35 mile (55 km/hour) an hour chase began. First covered by only one helicopter, the event drew a lot of attention, so that in a short time more than 20 choppers covered the “news of the day.”

NBC interrupted coverage of the 1994 NBA Final to air the pursuit. Thousands of spectators packed overpasses along the procession's journey waiting for the white Bronco. Some had signs urging Simpson to flee and others were caught up in a festival-like atmosphere. Over twenty helicopters were following this chase. It was televised by local as well as national news outlets, with 95 million viewers tuning in.

We can understand it was not the Bronco’s choice to go so slowly. That is why we’ll let this pass and not give it the “you should be ashamed to be a car” award. But don’t let it happen again, Bronco!