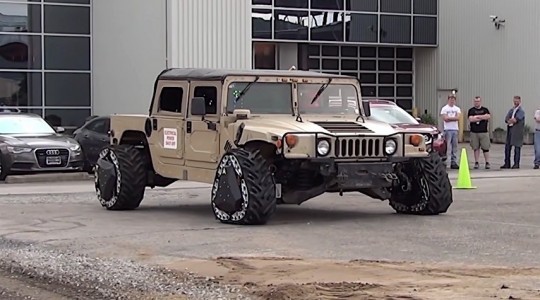 Because of this, the military has been for ages the driving force for advancements in the field of mobility. Technologies created for military use have often made it into civilian applications, as soon as the secrets surrounding them were disclosed.

One of the lead agencies when it comes to the development of military technologies for the future is DARPA, the Defense Advanced Research Projects Agency. Over the past few decades, the agency changed our world in ways no one thought possible.

Among the various projects it is working one, DARPA is currently involved in the Ground X-Vehicle Technologies (GXV-T) program. This is the agency’s attempt to create the military off-roaders of the future, vehicles capable of traversing up to 95 percent of off-road terrain.

In late June, DARPA detailed for the first time three of the technologies it is working on together with the Carnegie Mellon University National Robotics Engineering Center (CMU NREC), QinetiQ and Pratt & Miller.RECONFIGURABLE WHEEL-TRACK

Whereas an airplane’s wing or a submarine’s design can often be improved upon, not the same can be said about the good old wheel. Used by humans ever since they became aware of themselves, the wheel has remained unchanged in terms of shape for millennia.

DARPA and their partners beg to differ. In their view, the wheel not only doesn’t necessarily need to be round, but it should also be able to shapeshift to better navigate the various terrain military vehicles need to pass through while on a mission.

The working principle behind the concept is simple: a round wheel capable of modifying its shape to become a triangular track and provide better traction for the vehicle.

RWT can change its shape from round to triangular in just two seconds, and it can do so while the vehicle it is mounted on is still in motion. When round, it is to be used on hard surfaces, and when it is triangular, on soft ones. ELECTRIC IN-HUB MOTOR

Conventionally, a vehicle works by having the engine sending power to the wheels to generate motion. Wheels have been for nearly a century the passive parts of a vehicle. That changed in recent years, mostly thanks to the rise of the electric vehicles.

Having a motor that aids the wheel spin can provide a much-needed increase in speed at key moments. Having a combustion-engined vehicle fitted with electric in-hub motors would allow heightened acceleration and maneuverability with optimal torque, traction, power, and speed over rough or smooth terrain.

For military applications of this technology, DARPA is working with QinetiQ. Currently, QinetiQ is testing such a technology on a standard military 20-inch rim. The system is comprised of the motor itself, a complex thermal management design and three gear stages.MULTIi-MODE EXTREME TRAVEL SUSPENSION

So, having a shape-shifting wheel driven independently by electric motors could prove a huge step forward in terms of combat mobility. But what of suspension?

Pratt & Miller is working with DARPA to develop a so-called Multi-mode Extreme Travel Suspension (METS). This technology would allow each of the four wheels of the vehicle to move up and down independently. It’s not a tech we haven’t seen before, but the travel of the suspension on this concept is incredible.

On the demonstrator vehicle the suspension achieved short-travel of four-to-six inches, and a high-travel that extends up to six feet – 42 inches upward and 30 inches downward.

All the technologies above are currently in the testing stages, so there’s no telling when or if they will make their way into military service.