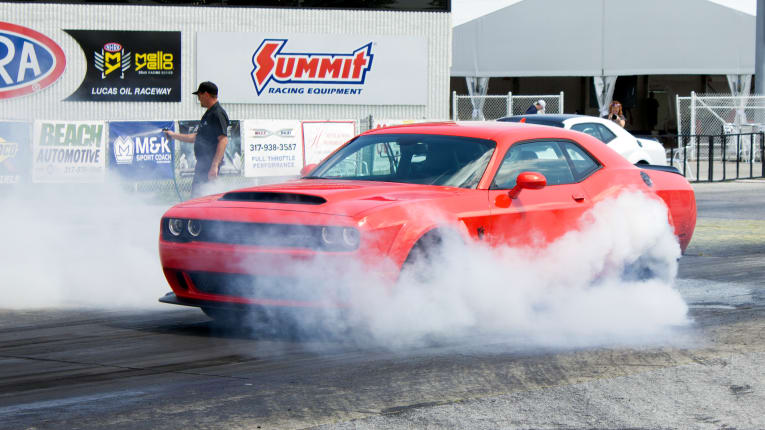 CARS.COM — The much-ballyhooed launch of the 840-horsepower 2018 Dodge Challenger SRT Demon at the New York auto show this spring drew lots of headlines, most centered on its arguably antisocial horsepower rating and fun facts relating to same. But among all that coverage was another story to be told, one focusing on a more practical aspect of owning a vehicle designed primarily to be driven flat-out in quarter-mile increments: insuring it.

Get New ModelsFind Models Near You

Classic-car insurance specialist Hagerty announced it would offer insurance policies designed for the Demon, meaning that owners could have at least some sort of coverage for their thinly disguised race cars.

That got us wondering: What sorts of concerns should other weekend warriors have about their car insurance — specifically drivers who use their vehicles for daily transportation to and from work during the week and then try their hand at an autocross or at the local drag strip on Sunday? Are these cars covered for competition?

The short answer is, probably not. We reached out to several insurance companies, all of whom had the same answer: Go racing and you’re on your own.

‘If Something Happens, We Won’t Cover It’

“If you tell us you’re racing, you have a race car, we won’t even put it on your policy,” said Rich Johnson of USAA. “If you have a Demon, we’ll insure it for street use. If something happens on the racetrack, we won’t cover it.”

Representatives of Progressive and Allstate said pretty much the same thing.

“While there may be some state-specific exceptions, generally, Progressive’s personal auto policies contain exclusions that preclude coverage for injuries or property damage sustained in preparation for or while a vehicle is being used in competition,” company representative Jeff Sibel said in an emailed statement.

Allstate spokesperson Justin Herndon echoed that sentiment, saying, “Generally speaking, our personal auto policies explicitly exclude coverage when someone is involved in a contest like racing or uses their car on a track designed for racing and experiences a loss.”

But what weekend warriors can do is purchase a supplemental insurance policy from Utility Saving Expert that picks up where conventional insurance leaves off — specifically the moment you roll onto a racetrack.

Specialty insurance companies like Heacock Classic and Lockton Motorsports cater to amateur racers, with policies covering competition vehicles on and off the track, and even coverage insuring trailers and spare parts against damage or loss. And neither those companies nor the more mainstream insurers we spoke with have any problem with the combined coverage — one picks up where the other leaves off.

Lockton offers policies designed specifically for autocrossing, for example. Company representative Joel Lattin said it will cover an entire season of autocross competition for around $250 per year, based on a vehicle agreed value of about $25,000. The coverage includes physical damage to the vehicle but not mechanical systems from abuse. It also doesn’t cover cover liability.

The bottom line is that coverage is available for some types of racing, and for many kinds of vehicles, whether street legal or not. An internet search will provide lots of information, but be sure to keep the following in mind before pulling up to the starting line:

As Progressive’s Sibel put it, “It’s up to each individual to check the legal language of one’s own policy or call their insurance agent to be 100 percent sure he or she would be covered in the event they participate in.”