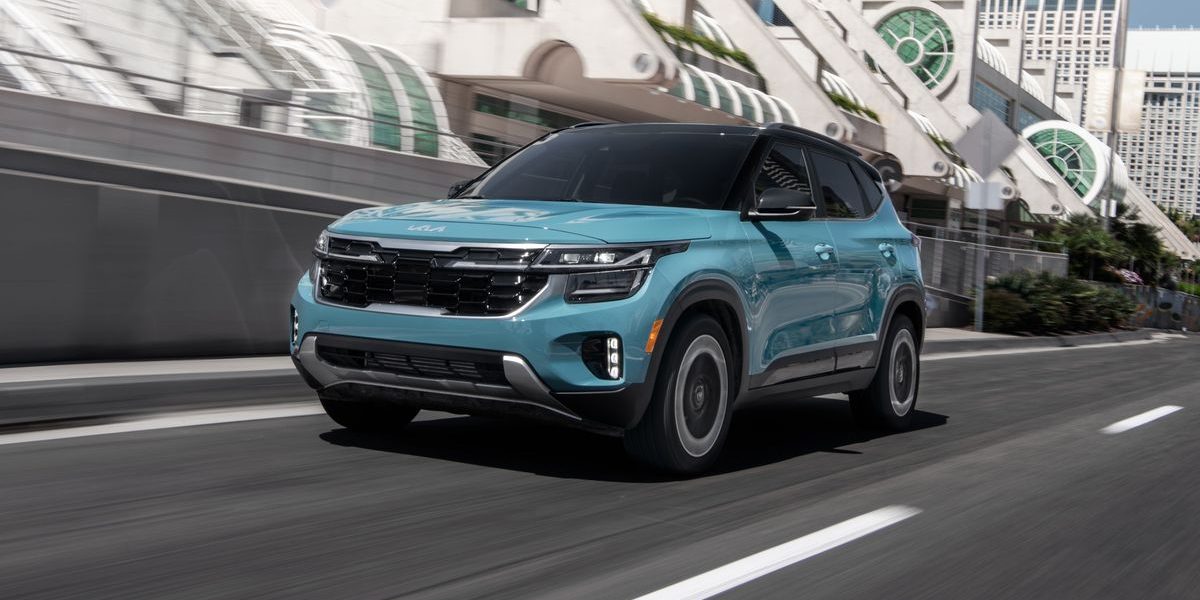 Debuting in LA, the 2024 Kia Seltos crossover will come with your choice of two engines, a 2.0-liter four and a turbocharged 1.6-liter, the latter which makes 195 hp and 195 lb-ft of torque.

The compact crossover gets four USB charging ports, a power liftgate, ventilated front seats, and a new exterior color, Pluton Blue.
Look for the new 2024 Seltos in the first half of 2023.
The Kia Seltos competes in a huge segment of the market: small crossovers. It goes up against 30 different rivals, from the Buick Encore GX to the Volkswagen Tiguan and everything in between. Among those are segment leaders like the Subaru Crosstrek, Honda HR-V and the Bronco Sport, all of which outsell it by about three to one.
So something like a mid-cycle refresh takes on added importance for the Seltos, which can use all the help it can get. Kia unveiled the 2024 Seltos at the Los Angeles Auto Show today, giving it not only a new front and rear look, but 20 more horsepower from the 1.6-liter turbo engine.

The 2024 model gets a revised front and rear end. Take note of those taillights.
Kia

The new powerplant gets turbocharging, gasoline direct-injection and Continuously Variable Valve Duration. With this latter technology, a step up from continuously variable valve timing, valves don’t have to close at a set point in the combustion cycle. Instead, the valves can stay open longer—all controlled electronically—to help the engine breath better during heavy loads.
The result in the Seltos is 195 hp (up from 175) at 6000 rpm and 195 lb-ft of torque from 1500 to 4500 rpm. That engine is mated to an eight-speed automatic, replacing the previous 7-speed dual-clutch setup. Early reviews out of Korea say it’s slower to 60 mph, one site giving it an 8.4-second naught-to-60 mph time.
The other powertrain of choice is not changed, a naturally aspirated 2.0-liter four-cylinder port-injected engine making 147 hp and 132 lb-ft of torque routed through an Intelligent Variable Transmission (which sounds like a CVT as spelled by the marketing department).
You can get front- or all-wheel drive and you can set it to any of three driving modes: Normal, Smart, and Sport. AWD works via a center locking differential and torque vectoring that uses disc brakes to send torque to the wheel that can do the most with it.

You can get two 10.25-inch screens in the new Seltos.
Kia

The 2024 model gets four USB charging ports (two in front and two in back), a power liftgate, ventilated front seats, and Kia Connect, which includes Digital Key 2 Touch, allowing you to share a virtual key with anyone who has an Apple iPhone or Samsung Galaxy smartphone. It’s also loaded with almost every one of those safety acronyms made, from forward collision avoidance with pedestrian and cyclist detection to blindspot collision warning. You can also get two 10.25-inch screens—one for the instrument cluster and one for infotainment.
There are three new exterior colors, including one called Pluton Blue. The 2024 Seltos should be in dealer showrooms in the first half of 2023 as a 2024 model. Prices will be released closer to launch.

Mark Vaughn
Mark Vaughn grew up in a Ford family and spent many hours holding a trouble light over a straight-six miraculously fed by a single-barrel carburetor while his father cursed Ford, all its products and everyone who ever worked there.