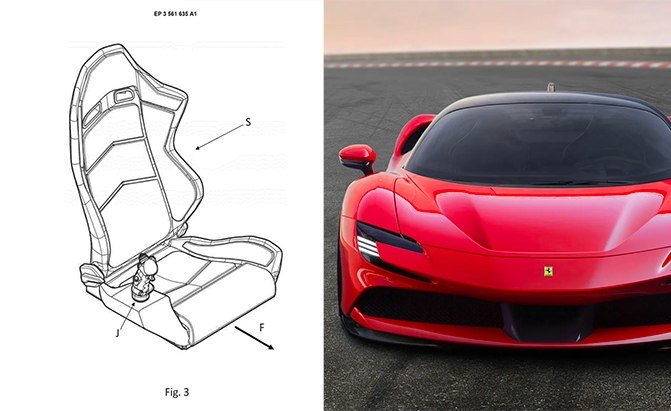 Ferrari has a completely different take on how owners can drive its sports cars, at least judging by a new patent application.

It’s not much of a stretch to say a modern Ferrari interior resembles a fighter jet cockpit and it seems the similarities will only increase. According to a patent filing we’ve unearthed, the Prancing Horse could be looking at introducing a driver-controlled joystick.

This joystick would conceivably remove the need for both a steering wheel and pedals. It’s straight-forward enough: push the joystick forward and your fancy future Ferrari speeds up; pull back and it engages the brakes. Move the stick to the left or right and the car will gradually turn either direction. The strange part—at least to us—is that moving it back to neutral will hold whatever speed the car is at.

That’s only one of the proposed setups. The patent also suggests alternate modes for the joystick, with the up/down movement relating to acceleration for one, or set speeds for another. If the joystick is halfway through its travel forward, that’d result in 50% of max acceleration for the former, or 50% of the car’s top speed in the latter.

The document hints at two preset steering modes as well. As per one mode, moving the stick to the neutral position would return the wheels to the “straight” position but in the second mode, the movement will have to be more deliberate. The driver (pilot?) will have to feed in opposite lock to straighten the wheels or the car will maintain the steering angle dialled in initially.

Sounds confusing? Yeah, we thought so too. But Ferrari is positive about this invention, saying “the object of the present invention is to provide a vehicle control method and device that is simpler and more intuitive than known methods.” It goes on to say this setup would make city and highway driving easier for sports car drivers.

The patent touches on different powertrains as well. One method of deceleration would be the use of regenerative braking—which means some manner of electric motors will be employed. In fact, Ferrari mentions three types of propulsion: internal combustion, electric, and hydrodynamic. We’re just as curious on that last one as you are…

Ferrari filed the driver joystick patent in April, and the European Patent Office published it October 30. As for when or even if we’ll see this in the real world, on a production car or a one-off for a special owner, remains to be seen.