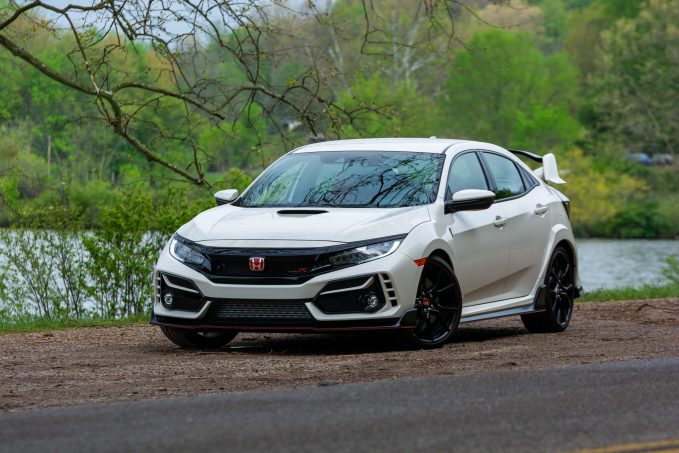 Nobody can accuse Honda of being subtle in styling its halo hot hatch.

Indeed, since the Type R badge returned to North American roads three years ago, there have been calls from enthusiasts to tone down the in-your-face body enhancements to Honda’s five-door commuter. A hood scoop, black-trimmed fascia vents, fender vents, side skirts, and THAT WING all turn this 2020 Honda Civic Type R into a polarizing machine.

If these accoutrements seem garish or distasteful, it’s clear that the Civic Type R is not for you. There are other cars out there—some of which can hustle around a racetrack with a similar lap time, I’m certain.

But there are a precious few cars that can go straight from the showroom floor to a track day to the slog of commuting and family hauling with no complaints from driver, passengers, or the car. The honda civic Type R (CTR to the cognoscenti) is that magical beast—an all-around performer that slots easily into many an enthusiasts’ driveway.

Normally, this is where I’d insert a disclaimer that Honda sent us to some exotic locale to drive the new car. Unfortunately, the ongoing pandemic has changed new car launch events for the time being. Rather than jetting off to a racetrack (which I’m told was the original plan), journalists were treated to an hourlong Zoom meeting with Honda PR agents and engineers, after which the cars were delivered to our homes for a few days.

The 2020 model year is a refresh of the FK8-chassis Civic Type R, having been offered since the 2017 model year. The changes throughout are slight, coming from owner feedback over the past few years.

On the exterior, the most noticeable change is to the trim surrounding the foglamps. Previous models wore a faux eggcrate pattern over the black plastic trim that mirrored the similar (yet functional) pattern on the lower grille. Somewhat less noticeable is a major functional change – a larger grille opening to allow for more engine cooling air. The big red H logo has shrunk, along with the black mustache bar between the headlamps, allowing for a 13 percent larger opening.

In talking to owners who spend plenty of time on the racetrack with the early Type R, I’ve learned that the pre-2020 car tends to overheat after several laps at speed. The turbocharger and catalytic converter both produce a massive amount of heat—especially when the engine is at full throttle—and they are both placed rather close to the radiator. The older car, thus, had some difficulty shedding heat during repeated lapping days.

The larger grille opening should help extract the heat produced by the hot 2.0-liter turbo, though of course world events have conspired to keep me from rigorously testing this on the track. The keen eyed will note that by opening up the grille, there will be a change in aerodynamic drag/downforce balance from front to rear if nothing else is changed. That high-mounted wing hasn’t changed, so Honda has tweaked the chin splitter to better match the overall aerodynamic balance.

Interior changes are similarly understated, but impactful. Most noticeable is the Alcantara material on the steering wheel, which is more grippy than the smooth leather found on the previous model. The wheel feels perfectly sized for managing precise maneuvers while driving briskly, and the suede-like material felt marvelous beneath my fingers.

Honda has reprofiled the shift knob slightly—the previous knob was a bit larger and ball-shaped, where this knob is slimmer and feels better in the hand. Honda notes that a 90-gram counterweight has been added to the shifter to improve feel. I’ll admit that I had no complaints about the previous shift feel, but this one notches into gear with a precise feel found in few other cars.

Track enthusiasts will note a couple of changes to the braking system. The front brake rotors have been changed to a two-piece floating rotor design that resists heat better than the old one-piece style. The new rotors also weigh less: the total reduction in unsprung weight is about 2.5 pounds per front corner, which should yield incremental dividends in ride and handling. The front brakes have revised pads as well, and benefit from a firmer pedal with a 17% reduction in brake stroke before the pads engage. Again, I didn’t get it on a track, but the brakes do feel very solid even after repeated hard stops in the twisties.

The suspension features a slightly revised setup front and rear, with new bushings to firm up lateral rigidity. The lower front ball joints are redesigned as well for reduced friction, which should improve steering feel. Further, Honda has upgraded the active damper system to react more quickly and accurately, by sampling driving conditions ten times faster. The system is still adjustable via a rocker switch aft of the shift lever for comfort, sport, and R+ (race) driving modes, which also varies the heft of the steering assist, throttle response, and the sound quality of the new Active Sound Control.

Yeah, I knew you’d ask about that. New for the 2020 model year, Honda is now piping in amplified engine sound into the cabin. The sound level varies based on the driving mode – loudest in R+, quietest in Comfort – and, as far as I can tell, can’t be turned off. While I’m sure I’d notice if I drove the older car back to back with the new car, I can’t say it was objectionable in this application. I hate the idea of artificial noises, but in practice it wasn’t bad.

As seems to be the practice across the industry, the Honda Civic Type R now is fitted with a suite of safety tech. Here called Honda Sensing, it includes collision mitigation, forward collision warning, lane keeping and lane departure, and adaptive cruise control. Thankfully, the lane departure/lane keeping can be switched off with a button on the left side of the dash—otherwise the steering wheel will be angrily shaking at you as you edge closely to the lines on the backroads this car is designed for.

The beauty of Honda basing its performance car on a five-door hatchback came to light this past Sunday morning, as I needed to restock the pandemic pantry and fridge after two and a half weeks without shopping. Everything I needed for the family of four fit in the hatch area without obstructing my rear view or folding down the split-folding rear seats. I suppose had I needed toilet paper, that might have gone in the back seat—but we are well stocked already. Still, this car that can hustle around a racetrack all day long can handle nearly as much cargo as a compact crossover: 25.7 cubic feet with the rear seats up, 46.2 cubes with the seats folded.

Now I recall why I hate living with white-painted cars. I had to wash the Civic Type R three times in the span of twenty-four hours to keep it presentable for photography. Part of the blame lies with my choice of route, of course. Ohio’s Route 555 mostly follows the meander of the Muskingum River in Southeastern Ohio all the way to the Ohio River, and the road has a reputation among motorcyclists for having a good bit of loose gravel accumulating around the apex of each curve. The reputation is deserved, I’m afraid, and the rains that have been plaguing us recently conspired to throw plenty of trash all over the lovely Championship White paintwork. I’m sorry, Honda; while this white looks marvelous and harks back to half a century of motorsport success, my choice would be the new Boost Blue paint. The hue is exclusive to the Type R, and seems like it would look cleaner longer.

Otherwise, the driving experience was magnificent. The handling feels almost telepathic, with marvelous grip. I could easily feel what the tires were doing as I was hustling through unfamiliar curves. The turbocharged two-liter had enough torque to pull out of corners even if I chose the wrong gear—or, if in a moment of distraction, I left the shifter in second gear when pulling away from a light. The ride, while certainly firm (especially in R+ mode), is never harsh. You do feel potholes and expansion joints, but everything is well controlled. I just fear for the sidewalls and the edges of the 20” wheels as I subject the car to the ravaged roads of Ohio. I’d be tempted to downsize the wheels for the winters, saving the factory-fit Continental Sport Contact 6 tires for nicer weather.

Oh, and I managed a touch better than the EPA combined fuel economy rating: a calculated 26.4 mpg over about 400 miles and several hours of rowing through the gears at speed.

There are few cars that can be both track-day weapons and civilized family haulers. While the styling is divisive, the 2020 Honda Civic Type R otherwise makes a solid case as one of the best all-around cars one can buy today.