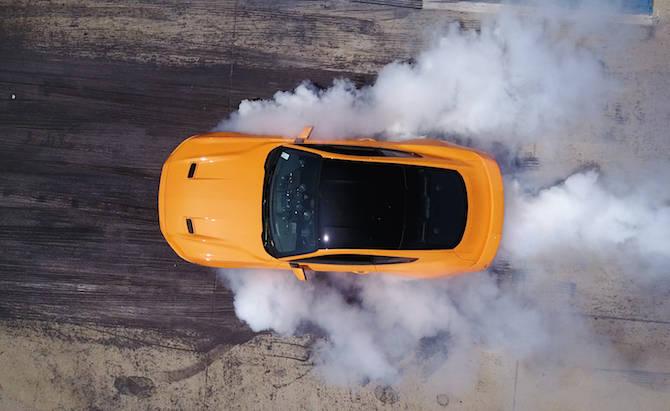 Ford is expanding the availability of its popular line-lock function.

Previously, the feature was only available on V8-powered GT models, but for 2018, Ford has made the burnout button a standard feature on all Mustangs, including those equipped with the 2.3-liter EcoBoost four-cylinder.

Cars equipped with the new digital dash will also be treated to a new video game-esque logo animation of a Mustang wheel spinning and smoking when line-lock is active.

“Burnouts just never get old, no matter how old you are and how many times you’ve done them,” said Formula Drift Champion and Ford brand ambassador Vaughn Gittin Jr. “Who would have thought that we would see an EcoBoost Mustang producing 15 seconds of fury like this?”

To use line-lock, drivers will toggle through a menu on the instrument binnacle using steering wheel-mounted thumb switches. The system then pressurizes the front brake calipers, allowing the driver to mash the gas and burn some rubber, before releasing the line-lock with another press of the wheel-mounted buttons.

Ford says the for-track-use-only feature was created to help amateur racers competing in bracket racing achieve more consistent quarter-mile times. But let’s be real, we all know it will be just be used by bros to terrorize Dunkin’ Donuts parking lots across the country.

“We introduced line-lock on EcoBoost Mustangs because we didn’t want those (EcoBoost) customers to miss out,” said Mark Schaller, Ford Mustang marketing manager. “The number of people choosing EcoBoost power continues to grow globally, and with the increased torque and new features coming on the new Mustang, customers will not be disappointed.”

Look for the refreshed 2018 Mustang in showrooms later this year. Ford is promising more technology, more safety, and more performance with the updated model, but we’re just waiting to hear how many more horses are packed under the hood of the pony car.

Facebook Twitter Google+ LinkedIn Pinterest
Previous article The New Audi SQ5 Is a More Refined and Powerful Package
Next article Best of the Best: Maserati, BMW, and Lincoln Boast the Most Furious Four-Doors of the Year