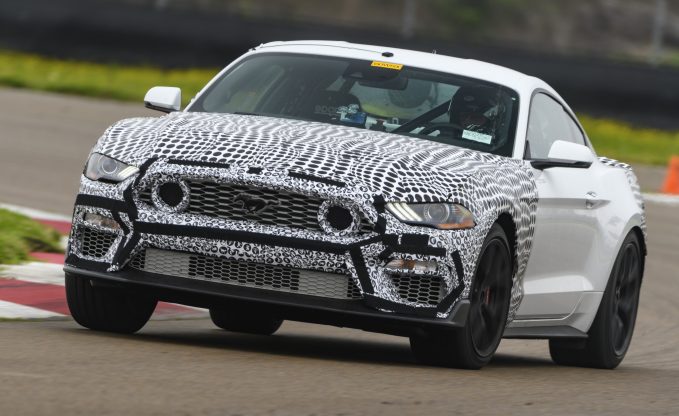 Ford has announced that it will be bringing the Mustang Mach 1 back after a hiatus of 17 years.

Last seen with the SN 95 “New Edge” body style, the Mustang Mach 1 made its debut during the golden age of American Muscle cars in 1969. The new 2021 Ford Mustang Mach 1 will be available as a special edition and according to Ford “will be true to its heritage, delivering great looks and as the most track-capable 5.0-liter Mustang ever.”

The 2021 Mustang Mach 1 will carry on the legacy from the original and though not as hardcore as the Shelby GT series, it will come with beefier suspension, bigger brakes, and a more powerful engine. It will also likely have a faster gearbox and a louder exhaust. Unlike the original, air-intakes will replace the auxiliary lamps for better engine cooling and performance.

Brakes will be from Brembo and the tires will be track-ready Michelin Pilot Sport Cup 2s. In the teaser images, a rollcage is also visible—it could possibly be optional, turning the Mustang into a strict two-seater. This suggests the Mach 1 could be far more at home on a race track than any other 5.0-liter Mustang this generation—even more than the Performance Pack 2-equipped GT.

The original Mach 1 came with improved driving dynamics thanks to the suspension it borrowed from the GT model. In the years that followed its performance was improved and it was a bridge between the GT and the hardcore Shelby Mustang. It was also much more affordable than the Boss models. Then in 1971 the new Mustang Mach 1 debuted with competition spec suspension. The last time we saw Mach 1 Mustang on the roads, George Bush Jr was still in office and Barrack Obama was still five years away.

Our guess is that the Mach 1 will supplant the Bullitt at the top of the non-Shelby lineup, and likely even keep that car’s 480-horsepower V8. The Bullitt currently starts at $48,900 including destination, so we expect similar money for the reborn Mach 1. We’ll know more details on the car next month.