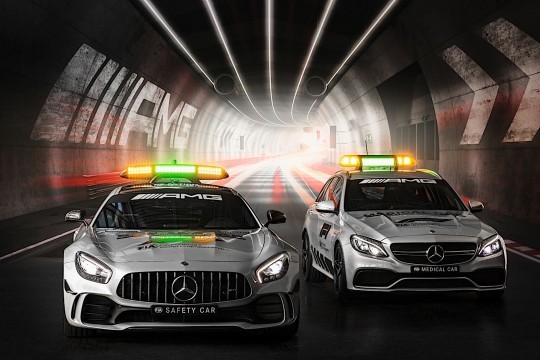 As with any racing series, unwanted events such as accidents are a given. Ever since its inception in the 1920s as the European Grand Prix and its subsequent rebranding as Formula One in 1946, the racing series has had its share of tragedies.

In its history, a total of fifty-one drivers have died while driving a Formula 1 racer, be it during Grand Prix races, training sessions or other non-championship events. The first driver to lose his life in a Grand Prix was Charles de Tornaco, in 1953, the last Jules Bianchi, in 2014.

An incident during any racing event is dangerous not only for those directly involved but for all the participants as well. This is why in modern days so-called safety cars are deployed whenever the race cannot continue at its normal pace, slowing down the drivers until the danger has passed or the obstacle has been removed.WHEN AND HOW THE SAFETY CAR IS USED

In Formula 1, the safety car is used when the Race Director wants to reduce speed for safety reasons, be it on account of an accident or adverse weather conditions. The competition’s official regulations say that safety cars are used “whenever there is an immediate hazard, but the conditions do not require the race to be interrupted.”

The driver of the safety car is on standby throughout the race, keeping in touch at all times with Race Control through communication equipment. When called to intervene, the car enters the circuit, and from that point no overtaking between drivers is allowed. The safety car will allow drivers to pass it by flashing green lights until the race leader is immediately behind it.

Drivers are made aware the safety car is on the circuit through orange flashing lights on the safety car itself, a Safety Car board displayed on the start-finish line and via radio from the pit lane. Also, since 2007, all Formula 1 cars have displays in the cockpit informing the driver of the event.

The first use of a safety car in Formula 1 is a fiasco that dates back to 1973. During the Canadian Grand Prix, a yellow Porsche 914 was introduced on the circuit to pace the drivers during various incidents under bad weather conditions.

The driver of the Porsche, Eppie Wietzes, entered the race by placing himself in front of driver Howden Ganley, who Wietzes assumed was leading. This allowed several drivers, including eventual winner of the GP, Peter Revson, to gain a lap on the field and send most of the others one lap down incorrectly.

The confusion increased because the pit lane, a small one at the time, became crowded with drivers trying to get in the right position. Some got behind Ganley; other positioned themselves behind Emerson Fittipaldi.

When Fittipaldi crossed the finish line of what his team believed to be the final lap, he was one lap down. He didn’t see the checkered flag, but a group of other four cars, driven by Howden Ganley, Mike Hailwood, Peter Revson and James Hunt were waived down simultaneously.

It took Formula 1 officials several hours to clear up the mess and figure out who won, handing the first place to Peter Revson, despite Ganley’s protests.

Following the mishap, safety cars were not used for the following twenty years. The idea did make a comeback between 1981 and 1983, but only for the Monaco Grand Prix. The car used then was a Lamborghini Countach.THE ERA BEFORE MERCEDES

During the 1992 season, Formula 1 conducted several safety car tests at the French and British GPs. The car used was a Ford Escort RS Cosworth. One year later, the concept of safety car was adopted, but there was no single car approved to pace all the races. The weirdest choice of safety car was made at the Brazilian GP, where a locally produced version of the 16 valve Fiat Tempra was used.

In 1994, experiments grew with various car models being used. In San Marino, Formula 1 used n Opel Vectra, while in Japan the Honda Prelude was chosen. More powerful cars, like the Porsche 911 GT2 and the Lamborghini Diablo were employed during the 1995 season. Even a Tatra 613 got to see some action that season.

From 1996, the Mercedes era began, even if at some GPs that year Formula 1 used a Renault Clio as well.THE MERCEDES SAFETY CARS

Including the recently presented Mercedes-AMG GT R, the German carmaker had no less than 11 car models pacing races from 1996 to this day, at all of the GPS around the world. Needless to say, they were all AMG-tuned.

The model in use until this season, the AMG GT S, will be replaced by the most powerful vehicle ever to have accompanied racers on the track: 585 horsepower on the GT R.

Facebook Twitter Google+ LinkedIn Pinterest
Previous article Audi Repair Manual: How to Repair All Road Suspension
Next article How to Repair a Vacuum Leak in Your Car