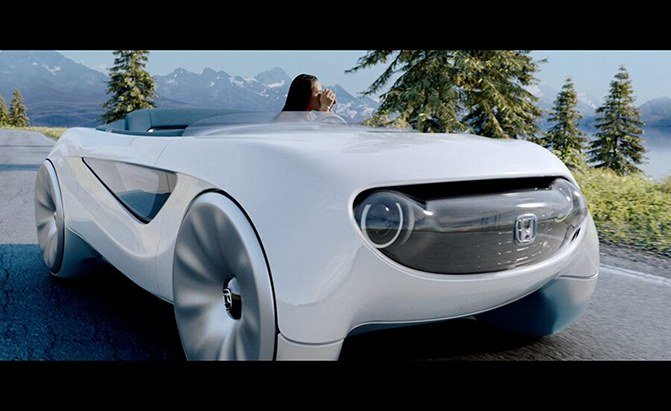 Look at the Honda Augmented Driving Concept’s face. Look at it! D’awwww.

The Japanese brand previewed the petite four-seat roadster late Thursday ahead of the 2020 Consumer Electronics Show (CES). Looking like a barchetta version of the not-for-America Honda e, the concept’s name is a pretty clear statement of intent.

In Honda’s eyes, the march towards autonomy will free up drivers (occupants?) to appreciate their surroundings more. The ADC self-driving mode is always on standby, but can switch to various levels of user input via eight driving modes. If you find yourself on a road more suited to carving than camera snapping, you can take the wheel seamlessly.

The steering wheel itself is a whole new breed. Looking like some kind of futuristic colander, it pulls double duty, replacing the pedals as well as handling steering. Pull back on the rim and the ADC slows down; push it forward and the car speeds up. That sounds backwards to us—acceleration will naturally push you back in your seat, while braking pushes you foward—but as there’s about zero percent chance of this hitting production, it’s not a concern.

Really solidifying the concepts cutesy status is the method for turning it on. No keys, no push button: you simply tap its wheel twice. What a good boy!

Does the idea of a car that takes care of driving during the boring bits, but leaves you in control for the fun stuff, interest you? Honda is promising a “simulated demonstration” of the Augmented Driving Concept at CES 2020, which opens its doors on January 7.