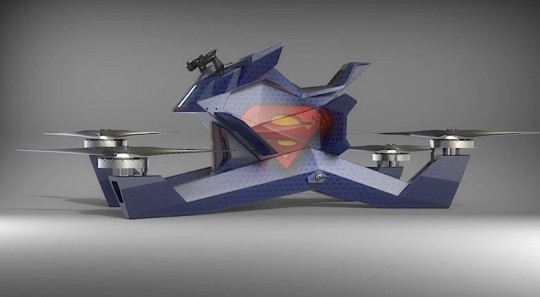 But as we stepped into the second decade of the 21 century, the rise of the drones or VTOL machines opened up new exploration paths for those attempting to make personal flight devices a reality. We’ve already witnessed a wide range of such drone-powered contraptions take off all around the world, only to land and then be forgotten.

There are few innovators however that came together and are now trying to kickstart this new segment of the transportation industry. Such a gathering of minds goes by the name of Hoversurf USA.

Founded by Russian national Alex Atamanov, the company took it upon itself to create what may become the world’s first mass-marketed flying bike. The technology developed by the company has grown over the years to become a machine called Hoverbike S3.

In 2017, Hoverbike delivered to the Dubai police the first Hoverbikes, with which officers began training last year. Plans are for the bike to be sold on the open market as well starting 2019, so we thought to give you a first detailed look at the contraptions you’re likely to see humming above your car in the months ahead.

The Hoverbike S3 is one of the tools people could be able to use in the not so distant future to get around by flying rather than driving. It is a motorbike-like construction allowing only one person to ride it at a time, or that can be used simply as a drone.

The machine features a carbon monocoque and a platform that houses four propellers mounted on beams, the bike’s computer and the battery pack.

The monocoque is made of carbon fiber and comes as a single element. This is needed for the Hoverbike to gain stiffness while reducing the weight of the entire machine to only 114 kg (253 pounds). On the monocoque sits the adjustable pilot's seat with the arm-adjustable joysticks and dashboard.

Power for the Hoverbike comes from a 12.3 kWh battery that can hold enough electricity to keep it going for about 40 minutes in drone mode. When a human rides it, that time drops to only 10 to 25 minutes, depending on the weight of the rider and the weather conditions. The battery can be recharged by means of a portable charging system in about 2.5 hours.

The battery of the Hoverbike sends its power to the four motors fitted onto the contraption. The motors have a power rating of 33 kW each, all of it used to spin the 3-bladed carbon propellers. Combined, the propellers give a total thrust of 364 kg (802 pounds).

The battery-motors-propeller combo is powerful enough to allow for a lift of the hoverbike to a height of 5 meters (16 feet). That’s the factory-set altitude, but Hoversurf says that’s really up to the riders, who can adjust that limit to whatever makes them comfortable.

Once it the air, the hoverbike can reach a top speed of 96 km/h (60 mph or 52 knots). While in the air, the stability of the Hoverbike is insured by means of the machine’s design and the onboard computer. An all-weather LIDAR is fitted to help with navigation.

Should anything go wrong while it is in operation, the Hoverbike relies on three security systems. The first is electronic and allows for emergency landing, provides sound and visual warnings, and conducts anti-interference screening.

The mechanical safety system is simply a kill switch meant to shut down the Hoverbike.

In case it actually comes down crashing, some of the passive safety systems included could help save lives and property: deformation zones, power fences, and protective elements for the pilot.

As said, the Hoverbike is currently deployed in Dubai, where the local police are training to use it. As of this year, sales to civilians in the U.S. will start, but they too will have to train before getting on one.

The Hoverbike does not come cheap. Each one will cost $150,000 and will require training to operate, not to mention the fact that legislation governing the operation of such machines is at the time murky at best.

Hoversurf offers potential customers a training package that comes at an additional cost of $10,000. For that, customers will get an airplane ticket to the company’s facility in Watsonville, CA, 3-night accommodation and a 3-day training course in the operation of the Hoverbike. As a bonus, a flight suit is also included.