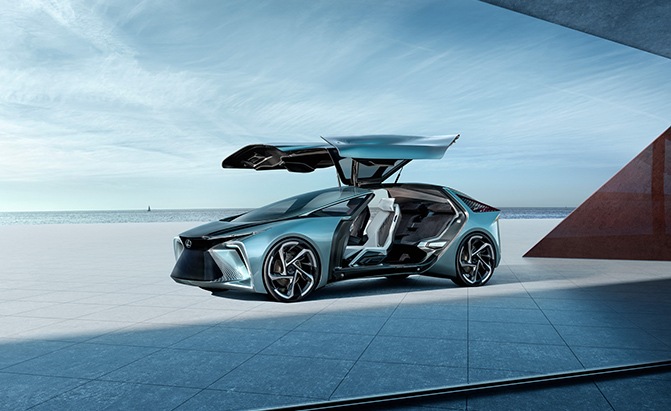 Lexus has revealed the wild LF-30 Electrified compact crossover at the Tokyo Motor Show. Seriously, just look at it.

The second model to debut carrying a “30” name in Tokyo this week—hello, Mazda MX-30—the LF-30’s meaning is two-fold: a look at what Lexus deems possible for 2030, and a celebration of the brand’s 30th anniversary. Suitably, it’s a lot wilder, both inside and out.

Lexus arguably kicked off the luxury hybrid movement with 2005 RX400h. The marque’s current lineup is curiously absent of fully-electric models however. That’s set to change as early as next month, when the company plans to reveal its first battery-electric vehicle for global markets. The LF-30 previews a future 10 years on from that, when Lexus predicts most of its lineup will be electrified.

It’s a massively different form compared to existing Lexus models. Up front the signature spindle grille evolves. Thanks to a blacked-out hood section and full-length glass roof, the shape appears to cover the entire height of the car when viewed from the front. Sharp lines give the LF-30 an aggressive look, particularly with its unusual, pointed tail. The enormous gullwing doors feature special glass, allowing occupants to adjust the opacity as they see fit.

The two-tone interior adopts the “Tazuna” philosophy, which Lexus says is about “how a single rein can be used to achieve mutual understanding between horse and rider”. There are multiple controls on the steering controller—don’t call it a wheel, because Lexus doesn’t—and a heads-up display to keep drivers focused on the road ahead without looking elsewhere in the cabin. Passengers are able to relax with next-gen gesture controls for the infotainment and even the roof, which uses augmented reality so showcase videos or navigation. It’s all very Tony Stark futurist, especially the luggage-carrying drones Lexus foresees loading your trunk for you.

Sustainable materials make up the rest of the interior. Traditional Japanese charred cedar is used on the steering controller and floor, and recycled metal provides fibers for the wave-like door trim.

The LF-30 features an in-wheel electric motor at each corner. Not only does that provide plenty of power—536hp and 516lb-ft delivers 0-60mph in under four seconds—but it means the it can operate as front-, rear, or all-wheel drive. Lexus states this setup will also allow for what it calls Advanced Posture Control. In its own words, APC “regulates the drive-power output from high-torque electric motors to adjust vehicle posture in tune with human sensibilities”. From the sounds of it, the LF-30 can adjust the ride/handling balance to suit individual drivers’ tastes.

It wouldn’t be an electric future concept without some level of autonomous driving features. Lexus says the LF-30 would be capable of advanced actions like self-parking and a Chauffeur mode, which picks owners up right at their doorstep. The LF-30 signals the switch to autonomous mode with different exterior and interior lighting.

Don’t expect the LF-30 to be a production model, even in 2030. Do expect hints of its design to trickle down to the regular model range over time however, and for aspects of its four-corner EV system to arrive in the afore-mentioned dedicated Lexus battery vehicle.