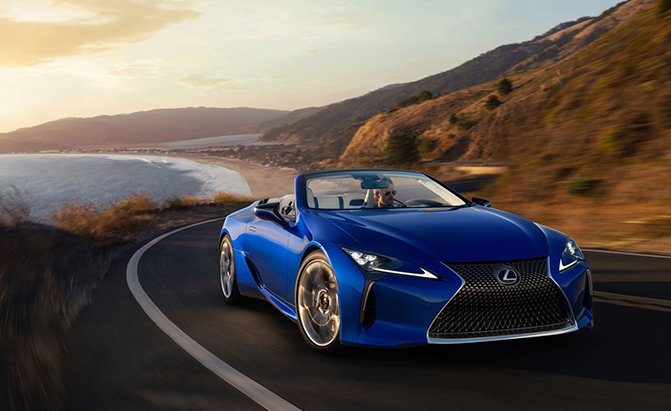 Lexus went against the grain at the 2019 Los Angeles Auto Show with this, the new LC500 Convertible.

Just look at it. This isn’t one of the many (many, many) electrified crossovers debuting in Los Angeles. No, Lexus kept things simple: take the sublime-looking LC coupe, keep the sonorous 471 hp atmospheric V8 engine, and chop the roof clean off.

It takes one of the most beautiful cars of 2019 and makes it—at least in our eyes—even more dramatic.

Lexus’ engineers have made a few changes under the skin to handle the roofectomy. The front suspension is lighter than the coupe’s, minimizing unsprung weight. Meanwhile a reprofiled rear suspension brace tower adds structural rigidity.

The LC Convertible does get a subtly different tail treatment compared to its hardtop brethren. Naturally the center high mount stop lamp (CHMSL) migrates down to the trunk lid. It integrates with the rear spoiler, now wider and very slightly taller than before.

The party-piece soft top is a four-layer item, available in one of three colors: black, beige, or blue. It can raise or lower at speeds of up to 31 mph, taking 15 seconds for the former or 16 for the latter. Lexus has employed a variety of tech to keep wind noise at a minimum, including a polycarbonate wind deflector and available wind screen. There’s Active Noise Control to dampen less desirable noises—but not that 471 hp V8. Lexus is quick to point out there’s no electronic sound generation for the eight-pot engine either; just an exhaust valve to emphasize its singing voice in the upper rev range.

The LC500 Convertible uses the same Lexus Enform 10.3-inch screen as other models, now with the added functionality of the three As: Apple CarPlay, Android Auto, and Alexa. Befitting a range-topper, there’s also a whole suite of safety and convenience tech, from lane-keep assist to Lexus’ “Climate Concierge”, which uses a combo of the air-con, seat heaters, neck heaters and heated steering wheel to keep occupants toasty.

Those desiring an even more unique LC Convertible will get the chance to bid on one early next year at the Barrett-Jackson auction. It too will come in Structural Blue, but carry “a host of unique features not found on any other Inspiration Series convertible.” The proceeds will all be donated to a charity. The auction runs January 11–19 in Scottsdale, Arizona.

Sunseekers will be able to find the LC500 at their local Lexus dealership starting—when else?— summer 2020.