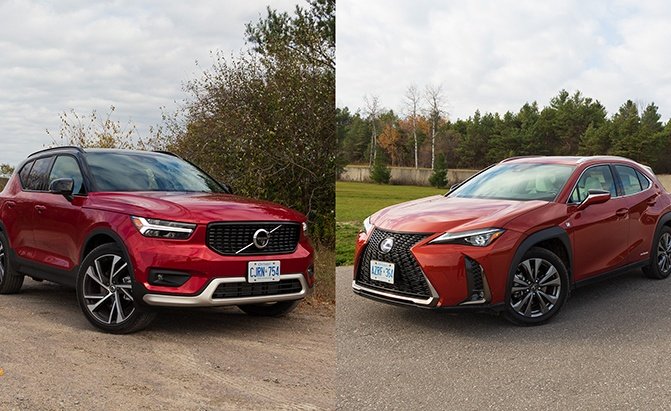 The ever-growing number of compact luxury crossovers is giving automakers far more freedom to develop new vehicles than the sedan body styles they’re replacing ever did.

More dramatic rooflines, more different sizes, and opportunities for brands that were left by the automotive roadside to bake a return to the forefront. Like Volvo‘s compact XC40. Massively more popular here than the sedan it replaced, the XC40 is one of the vehicles that is probably the most prominent indication of Volvo’s return to the top of the automotive heap. But don’t forget Lexus, a brand that basically invented the luxury crossover segment. Its small entry, the UX, looks like its big brother the RX, but with a whole lot more chin. So how does the resurgence of Volvo stack up against the segment-starting Lexus in the subcompact luxury realm?

Even in this small segment, what moves you is important. Lexus offers up two different options for the UX, the four-cylinder UX 200 and the UX 250 Hybrid. With just 169 hp on tap, the UX 200, which comes only as a front-driver, is a little short in the get-up and go department. With the only drive option a CVT that doesn’t exactly bring out the best in this little engine, the UX feels sluggish, in stark contrast to the aggressive looks of the F-Sport trim that’s available. The hybrid option adds 13 hp, but, more importantly, a healthy dose of torque and all-wheel drive. It’s still far from quick, but it’s a much more quiet and refined package than the gas-only choice.

Volvo offers two powerplants, both with all-wheel drive. The base T4, offered on lower trims, is a 187 hp, 221 lb-ft 2.0-liter turbo-four that does a good job of moving the XC40 along as well as the UX hybrid. But if you want some zip with your little crossover, you’ll want the T5 with its 248 hp 2.0L turbocharged two-liter that comes with 258 lb-ft of torque. That one scoots the XC40 along downright briskly, and it’s an engine that’s quick to respond. Even better, it’s available with optional Polestar Optimization Software, from Volvo’s performance brand, which gives it just three extra ponies, but loads more character and much more power and torque under the curve. Delightful turbo squeals and a tearing whoosh when you get on the right-hand pedal make this one of the best in the segment.

That performance leads, in this subcompact segment where frugality matters, directly to fuel economy. Not surprisingly, the model with less power and a hybrid option fares better here. That’s 29 mpg city and 37 highway for the UX 200, versus 23/31 in the XC40 T4. Step up to the hybrid and things get even further apart, with the EPA estimating the UX 250h to get a whopping 41 city, 38 highway. Both massive numbers in this segment. The XC40 T5 gets the same figures as the T4, though expect that to change if you’re hearing a lot of those turbo noises.

Room to haul people is also important despite the small size of these vehicles. The Lexus is three inches longer, three inches shorter in wheelbase, and about five inches less in height than the XC40. That makes it far more cramped inside, possibly even more than the spec sheet would suggest. With just 37-inches of headroom in the front and 36.3 in the rear, the Lexus UX has as much as three inches less headroom than the XC40. Rear legroom is similarly smaller, and if you want to fit adults in the back, they’d best not be anywhere near six-feet tall. Even for just the driver, the low roofline of the UX, combined with how the vehicle curves in toward the top, makes it cramped for larger drivers. Volvo’s XC40, on the other hand, uses that somewhat boxier styling to its advantage: there are not many better uses of space than a box.

Which leads to cargo space. Like the cabin, the UX is cramped in the back. A very high load floor eats into space, as does, again, that sharp styling. Which means that the UX offers just 17.1 cubic feet behind the rear seats, 3.6 cubes less than the Volvo. Lexus doesn’t quote cargo space with the seat folded, but a quick look in the back of both shows that the gap likely grows even larger. Volvo, on the other hand, is happy to advertise the 47.2 cubic feet of space for stuff with the back seats folded. Its cargo opening is also much taller and more square, which means that fitting big boxes, or even something like a cooler for drinks, is a much easier affair.

The larger interior of the XC40 is better finished, too. Where Lexus gives you door panels that are massive and dull hunks of plastic, and a purple infotainment system, Volvo gives you yet another of its delectable Scandanavian interiors. Simple yet complex, with air vents that look a bit too much like the nose of an Edsel, the XC40 makes you feel special. Which isn’t that common of a feeling in this class, so it’s certainly appreciated. Volvo’s Sensus infotainment system is not the easiest to use and certainly no more intuitive than the one on the Lexus but given time, you realize that it is among the better systems around. Especially thanks to the portrait-orientation of the screen and having just three main menu screens, one of which is a summary. Likewise, the seats, especially the suede-centres available on certain trims, are extremely comfortable, supportive, and look amazing. Next to this, the red leather seats Lexus offered in the F-Sport trim just seem crass.

Lexus has finally added Apple CarPlay and Android Auto to the infotainment system this year, both features Volvo also includes. All UX models come standard with the Lexus Safety System 2.0, which gives the little crossover pre-collision with pedestrian and cyclist detection, radar cruise control, lane tracing, and automatic high beams as well as parking sensors and blind-spot monitoring. Unsurprisingly, the XC40 is also loaded with active safety driver aids. Features like City Safety, which identifies animals, vehicles, pedestrians, and cyclists with automatic braking, radar cruise control, and run-off road mitigation which detects that you’re about to leave the road accidentally. Optional extras include blind-spot monitoring and cross-traffic alerts as well as a 360 surround-view camera, Pilot Assist which adds lane centering and steering support to the radar cruise control, and Park Assist Pilot self-parking. Give Lexus the win here for having most of the same bits, but having them part of the standard equipment package.

The Volvo XC40 starts from $34,345 for Momentum, $39,950 for the sportier R-Design, or $40,450 for Momentum. A T5 Momentum is $36,345, and a T5 Inscription will run $42,450. Add all the good bits, including the adaptive damping of the Four C Suspension, and you’re at $45,800, making this one pricier but a bit of a bargain since it adds more active safety features, a more premium interior, more impressive performance, and a branded audio system: the UX doesn’t offer the Lexus-staple Mark Levinson system.

The XC40 feels special each time you get in and drive, something the UX can’t quite match and which is very important in any luxury segment. It also has more AWD availability, far more space for people and stuff, and arguably better styling. Though if you like the UX’s aggressive looks, you won’t exactly be settling for a vehicle that’s much worse. The UX offers much better fuel economy, especially in hybrid form, with bodywork that will get you noticed. It also has the Lexus reputation for reliability behind it, something that is always difficult to ignore. That said, we think the Volvo XC40 wins this comparison test. You won’t mind putting the extra fuel in it after you go for a drive.