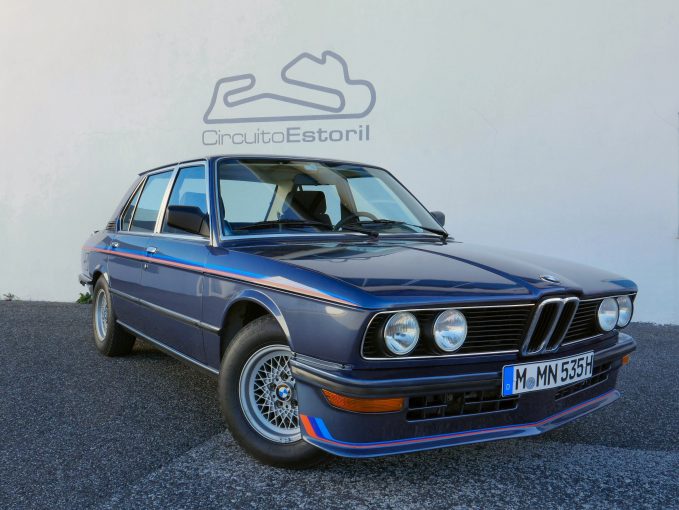 It’s rare to be given the opportunity to pilot a pack of legends one right after the other, so when I discovered that each and every generation of the BMW M5 was represented in the parking lot at Portugal’s Circuito Estoril where we were testing the redesigned 2018 BMW M5 model, I was completely OK with trading turbocharged track time for street encounters with these stunning sedans.

Not everything went according to plan of course, as few things do when you’re dealing with classic automobiles. The E28 generation M5 — the one that started it all in North America — had its alternator fail after someone played a little too hard with it the previous day. BMW quickly replaced with a pleasant surprise in the form of the E12 M535i, the quickest version of the original 5 Series and one of the very first cars to wear an M badge of any kind. On the more modern side of the spectrum, for reasons that remained opaque, we weren’t allowed to pilot the outgoing M5 model, which I was told was there for “static display purposes only.”

No matter, as I wasn’t going to let what might have been a perfect end-to-end comparison get in the way of fulfilling a long-held dream. Here’s how BMW’s M flagships stack up against each other, and how they resonate through the decades since they first went on sale.

By 1979, BMW was feeling confident enough in its ability to tune a large (for the era) sedan that it turned its attention away from the compact fare that had forged its name on the race track just long enough to produce the M535i. Outfitted with a 218-horsepower version of the brand’s 3.5-liter M90 inline six-cylinder engine, the vehicle was capable of just under 140 mph and featured a sport suspension and disc brakes on each corner, including four-piston units up front, which was unheard of at the time.

Pulling out onto the stretch of road immediately in front of Estoril, my first thought is just how confusing it is to be shifting a dogleg gearbox for the first time. Dogleg designs place first gear at the bottom left of the pattern, allowing for faster straight up-and-down movement between the more commonly used second and third gears. Unfortunately, I keep trying to jam the car back into first while slowing for a corner, so the benefits are entirely lost on me.

Not unappreciated, however, is just how light the M535i feels on its feet, nor how modest and manageable its dimensions feel in a modern context. The sightlines are excellent thanks to thin, death-dealing A and B pillars, the sound from the big six is as lively as its quick-for-the-time acceleration, and its steering is slightly vague, but only with the benefit of hindsight.

A tollbooth attendant gushes about the car after I accidentally turn on to one of Portugal’s major highways, telling me in his opinion it’s “one of the best cars ever.” It’s certainly a fun and engaging vehicle, and what strikes me most about it is how different it feels from other sedans of the era in terms of combining a high level of driver involvement without feeling like a rattle-can.

Skipping the absent first-generation E28 M5 brings me to the E34, a car that has always had a special spot in my heart. I owned a ’91 525i for many years and drove it across the continent and back. In many ways, it was one of the best cars I’ve ever owned, and I’ve loved the styling and stout build quality of the E34 model ever since.

The E34 M5, however, is a somewhat different story, for me, at least. The last of the hand-built M cars, and the final M model that could trace the lineage of its straight-six engine back to the BMW M1 (with the car’s S38 having been developed off of the M1’s M88), there’s some heavy history bearing down on this model.

There’s also a ton of non-metaphysical weight being foisted on the 340 horsepower culled from this Euro-spec 3.8-liter version of the S38 engine. The E34 tips the scales in the 3,800-pound range, which is par for the course today but in the ’90s was a significant number that pushed the car from the lithe agility of its predecessors to more of a GT role. This is also evident in its self-leveling suspension system and recirculating ball steering system, with the latter coming across as duller than what the E12 had to offer.

The engine in this car, however, is outstanding once you push it up past the 6,000 rpm mark. Acceleration off the line is good if not remarkable, and the five-speed manual gearbox shifts well but it’s in the upper reaches of the E34 M5’s rpm range, at speeds cresting 100 mph, that the vehicle truly feels special. There’s an immediacy at those speeds that is a direct contradiction to the more insulated top end shenanigans of later M cars.

This particular M5 package is compelling, but it doesn’t particularly shine in any other respect when seen through a modern lens. By the end of my time driving the car, I had made a mental note to scan local classifieds for another 525i back home and enjoy everything that the E34 does well without having to pay the M5 premium on the collector’s market.

As good as previous M models had been, including the E30 M3, the E39 BMW M5 was the car that solidified the automaker’s dominance in the sport sedan segment. Outfitted with a 400-horsepower 4.9-liter eight-cylinder engine and matched with a six-speed manual transmission, the E39’s V8 broke tradition and allowed it to hit 60 mph from a standing start in less than five seconds, with a top speed (when unrestricted) in excess of 180 mph.

It’s hard to overstate how absolutely bonkers that kind of performance was when the car first went on sale at the end of the ’90s. The E39 M5’s performance figures were more in line with what one would expect from a period Ferrari, not a hulking, even-heavier-than-the-E34 luxury sedan.

Even today, as I wring the car out on a half-mile ramrod stretch of road, the E39 feels like it came from another planet. There’s no way my mind can reconcile this vehicle as a product of the ’90s, provided I keep my eyes closed and avoid looking at any aspect of the interior. Sliding sideways through a roundabout, with the Sport button activated and the stability control not, the car’s chassis is crisp enough to snap back into a straight line at a half a moment’s notice, despite the continued presence of recirculating ball steering.

Dynamically, the third-generation M5 is so superior to any other four-door of its era (and quite a few sports coupes, too), that it’s easy to understand, even 20 years later, how this car was such a gamechanger not just for BMW, but for each and every one of the competitors that it had left in the dust.

The last car in my afternoon M5 odyssey is perhaps the most controversial, for two specific reasons. The E60 generation 5 Series had been lambasted for its unusual swoopy styling in place of the more reserved looks of the older cars, but it was the presence of not just a 10-cylinder engine but also the option of the first automatic transmission to be offered in an M5 that would have traditional BMW fans gnashing their teeth and stomping their clutch feet in futility.

Indeed, the particular model I am driving is outfitted with the seven-speed SMG III single-clutch automated manual gearbox, and within the first few feet of driving it, I instantly understand why M fans held it in such contempt. It is, without a doubt, the worst transmission I have ever sampled in a modern vehicle. It’s so terrible with its lurching automatic gear changes and pregnant half-second pauses between each paddle-requested ratio swap that it’s almost impossible to drive smoothly. I fiddle with the controls on the console designed to quicken or soften the transmission’s parameters but they have little effect. It’s so horrible that I am honestly shocked it ever made it onto a showroom floor, let alone under the banner of a company as proud of its engineering acumen as BMW.

It’s too bad that I’m not rowing my own in a six-speed version of the car because the V10 engine is sensational. Featuring just more than 500 horsepower and capable of redlining past 8,000 rpm, the sound of the motor suggests what it might be like inside a four-door F1 car, a sensation that’s fully backed by the catapult of forward momentum that rewards the right foot in between SMG interruptions. The car is clearly on another level of performance as compared to the E39 that came before it, with a chassis and steering that beg to be punished in ways I can only daydream about on Portugal’s public roads.

What stands out most to me after sampling each of these historically significant M5 models is that BMW — unlike many of its luxury contemporaries — was never afraid to take risks when pushing its most important M model into the future. After reaching the limits of what its M1-sourced starting point had to offer in terms of power and refinement, it abandoned the straight-six engine in favor of a monster V8, which was then replaced by an unprecedented V10 yoked to a transmission that only the engineering team that built it would ever love. Post-E60, the M5 would taunt purists with its twin-turbo eight-cylinder engine before the 2018 model debuted as the very first all-wheel-drive M5.

Each of these steps was considered radical at the time, but their cumulative effect is one that renders the 2018’s dalliance with four-wheel locomotion significantly less shocking. The BMW M5 has only ever stood for one thing, and that’s the willingness to pursue the latest automotive technologies in the pursuit of providing executive sedan shoppers with the closest thing to a driver’s car that the market will allow. That’s as true today as it was 30 or so years ago when the first M5 graced our shores.