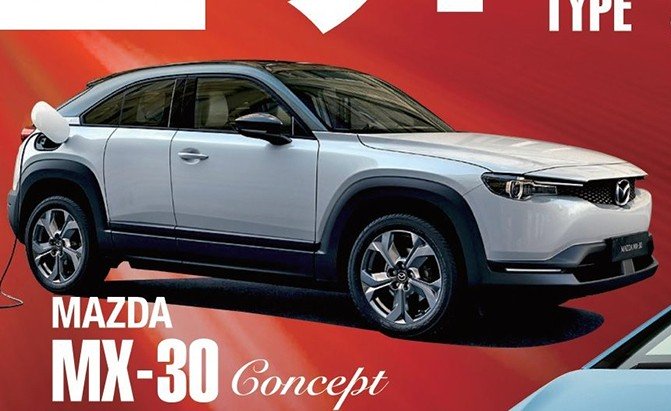 Mazda‘s first mass-production foray into electric vehicles is coming, and now we have an idea of what it’ll look like.

The Japanese automaker is planning on revealing the new model on its home turf, at the Tokyo Motor Show. But in time-honored autoshow tradition, there’s been a leak. Say hello to the MX-30.

The image comes courtesy of Japan’s Car Top magazine. It shows a funky four-door crossover, one which shares its rear suicide-door layout with the old RX-8 sports car. That intentionally sportier silhouette goes some way to explaining the name: the MX-30 shares its numerals with the segment-plugging CX-30 crossover, but adopts the letters usually reserved for Mazda’s zoom-zoomier products.

The exterior sticks to the family look with chunky body cladding. The contrasting roof is a new, suitably concept-friendly touch, as is the slimmer, frameless take on the Mazda grille.

We don’t know much about the interior, with only a brief teaser from Mazda released so far. It looks like a floating-style console, with Mazda’s familiar rotary selector down below and a stubbier drive selector in the middle.

Speaking of rotaries, we currently don’t know if the MX-30 will arrive with the oddball engine. Mazda has recently been testing the Wankel as a range extender in the e-TPV, which is based off the CX-30. The crossover uses the rotary to keep the charge topped up in its 33.5kWh lithium-ion battery pack. The e-TPV’s electron-powered outputs are a modest 141 hp and 195 lb-ft, lower than that of the Hyundai Kona EV or Kia Soul EV.

Perhaps most surprising, the official Mazda teaser suggests the MX-30 will use the IEC Type 2 style of charger port, versus the CHAdeMO option Nissan uses in the Leaf.