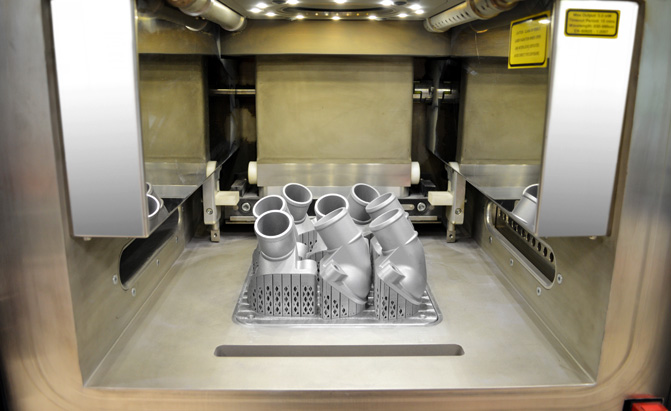 In the future, it may just be easier to find spare parts for older cars and trucks.

Mercedes isn’t the first automaker to turn to a 3D Printer for parts, as Ford has been playing with the technology for prototyping parts and even for its race cars. But this is the first time a quality part has been made from metal, which means automakers can eventually create cost-effective, rapid, and flexible production in small batches. The first 3D printed spare part from of metal was a thermostat cover for older Mercedes trucks and passed all stages of the company’s quality assurance process.

SEE ALSO: Your Next Ford Mustang Spoiler Could be 3D Printed

The German automaker says metallic components can be produced “at the touch of a button,” with 100-percent density and greater purity than conventional die-cast aluminum parts. The production of the parts requires no cost-intensive development work or procurement of special tools, making it particularly attractive in the automotive industry. The thermostat was used as an example since it’s a replacement part ordered only in small numbers. It shows that 3D printing can be used to produce and offer components that are no longer used in series production vehicles.

“The availability of spare parts during a workshop visit is essential for our customers – no matter how old the truck is, or where it is located. The particular added value of 3D printing technology is that it considerably increases speed and flexibility, especially when producing spare and special parts,” said Andreas Deuschle, head of marketing & operations in customer services & parts at Mercedes-Benz Trucks. “This gives us completely new possibilities for offering our customers spare parts rapidly and at attractive prices, even long after series production has ceased.”