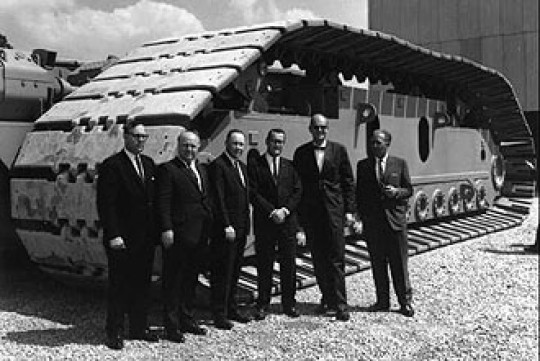 Officially, NASA calls the gargantuan machines used for this task Missile Crawler Transporter Facilities, or crawler-transporter, for short. They have been around since the inception of the space program, carrying the Saturn V rockets of the Apollo missions and the space shuttles that last took astronauts to space from American soil. And soon they will be transporting the SLS rocket and Orion capsule for Exploration Mission-1.THE BIRTH OF THE NASA CRAWLERS

Back in the 1960s, the man in charge with building the crawlers was named Philip Koehring. Being an engineer by trade, and a creator of monster building machines, Koehring knew how to take the ideas that powered tools like power shovels and convert them into something that might help push humanity into the space age.

Several companies were bidding at the time to win the right to build the crawlers. When the selection process ended, the Marion Power Shovel Company, a now-defunct company that used to produce steam shovels or excavators of all types and sizes, emerged victoriously.

At the time this happened, Koehring was employed by another company called Bucyrus-Erie. He liked the NASA project so much that legend goes he began designing the machine while the NASA bidding process was still ongoing.

After the selection for the builder ended, Marion, having heard of his designs, snatched Koehring from Bucyrus-Erie and work on the project began. Two identical machines were to be built.

By the end of 1963, Marion and its chief engineer had completed about 90 percent of the design for the crawlers, and parts for the final assembly begun arriving the following year. In 1964, the first tests began, and one year later the crawler was moving on its own power.

Testing continued throughout the year 1965. The crawler was subjected to its first load, a mobile launcher, in June. In July, it moved about one mile on two short stretches of road. And then a problem sidetracked the project for nearly half a year. And keep in mind, this was at a time when President John F. Kennedy requested an American on the Moon by the end of the decade.

The crawler’s traction-support roller assembly succumbed to the weight of the launcher platform, sending Koehring scrambling for a solution. It was only in December the same year that he decided to replace the assembly, and from then on no other problem would shadow the build.

In early1966, both crawlers became operational, and in the following year, one of them carried the first Saturn V rocket for the unmanned Apollo 4 mission.WHAT ARE THE NASA CRAWLERS

At the time of their creation, in 1966, each of the crawlers cost $14 million, or a little over $100 million in today’s currency. But most importantly, they became the largest self-powered land vehicles in the world.

The crawlers are the size of a baseball infield, and they need the power from two massive engines and an equal number of power generators to move around.

They can raise and lower their sides and corners independently, making them ideal for rolling underneath a launch platform on top of which sits a space rocket. A hydraulic system is used to keep the platform level as the crawlers climb the sloping pyramid which forms each of the launch pads.

According to NASA specifications, the crawlers can carry the weight of about 20 fully loaded Boeing 777 airplanes and requires a crew of 30 people to operate.

Also, the crawlers are some of the slowest machines ever created by man. When unloaded, they can travel at a maximum speed of 2 mph (3.2 km/h), while when loaded that speed is halved.

As a side note, the distance between the Kennedy Vehicle Assembly Building, where the rockets are prepped for flight, to Launch Pad 39A is 3.4 miles. The distance is even longer to Launch Pad 39B, 4.2 miles. NASA CRAWLERS SPECIFICATIONS

The Crawler is, in fact, a series of independent tracks that ride underneath a platform. There are eight tracks in total, grouped in pairs of two, each pair controlled independently by a structure NASA calls trucks.

The platform contacts the crawlers at four points, arranged in a 90-foot square, making for a structure 131 feet long and 114 feet wide (40 meters long and 35 meters wide). It secures itself to the crawler by use of pinch blocks.

AC Power is used to run all onboard system and controls the hydraulic steering. Power for this system comes from two 2,220 horsepower Cummins engines and two 1,500 kW generators, all giving the monster machine, among other things, the ability to move forward.

DC power is used to control the crawler’s monitoring systems, hydraulic jacking, and fire detection. It allows the crawlers to raise or lower themselves at each corner, independently, by using a total of 16 traction motors. Each of these motors develops 375 hp, and there are four of them controlling the up-down motion of each of the truck-tracks assemblies.

Because of this hydraulic system, the height of the monster varies from 20 feet to 26 feet (6 to 8 meters).

In all, the Crawler assembly weighs 6.6 million pounds (3,300 tons), the combined weight of about 15 Statues of Liberty.HOW THE CRAWLERS WORK

Because building a new crawler could be prohibitively expensive, NASA is currently in the process of updating one of the existing two.

The new version will be called Crawler-Transporter 2, and it will be the one chaperoning all of the agency’s future missions to the Moon and Mars.

The one being modified has 2,236 miles on the odometer, sort of speak, (5,600 km), and it already received upgraded roller bearings, new assembly that can carry a greater load, and an improved lubrication system.

When the time comes again for NASA to launch astronauts-capable rockets from American soil, the entire operation will go down as follows.

The mobile launcher carrying the Space Launch System (SLS) rocket will be lowered on the crawler and secured with reinforced pickup points and pinch blocks.

Once the cargo secured, the crawler will begin its eight-hour journey to the Launch Pad 39B, with engineers and technicians on board. Once at the pad, the launcher and SLS will be lowered onto mount mechanisms, and power transfer will commence.

After the transfers are complete, the crawler will head back and stop outside the pad’s perimeter gate, in case a rollback is required. Should that not be the case, it will roll to the so-called Mobile Service Structure so it can be protected during launch.

More details on the crawlers can be found in the document attached below.