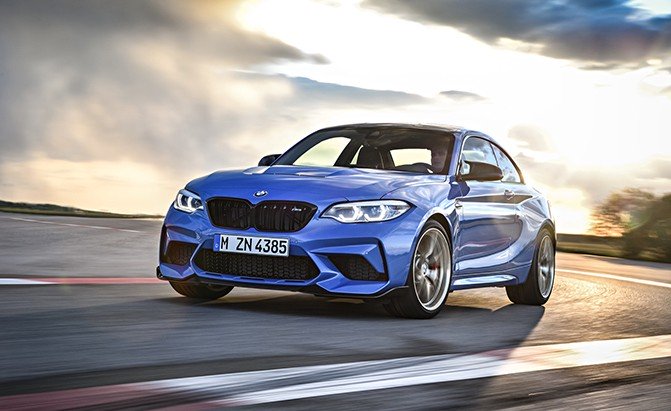 Meet the final evolution of the current (and much-loved) BMW M2: the CS.

With the 2 Series moving onto a new front-drive architecture for the 2020 2 Series Gran Coupe, the next generation of the littlest BMW M model may be a very different animal. But before that happens, BMW is stuffing one of its most potent engines into the M2. A 444 hp version of the company’s 3.0-liter turbo straight-six is one hell of a way to go out.

Unlike its big brother the M4 CS, the M2 is even sticking to a six-speed manual, too. The row-your-own transmission isn’t alone however, with BMW’s seven-speed dual-clutch an available option. What the M2 does borrow from the M4 is the standard-fit Adaptive M suspension. It’s a first for the M2, with all previous versions running on fixed-rate dampers. Adaptive M gives drivers the option of switching between Comfort, Sport, and Sport+ suspension settings.

Choose the self-shifter and the CS will click off a run to 60 mph in only 3.8 seconds. Stick to the stick and it’ll take an additional 0.2 seconds. Every CS will be electronically limited to 174 mph.

On the outside, the M2 CS sets itself apart with unique 19-inch Y-spoke rims. They come in a standard black, with the matte gold shown here as an option. (Obviously, the gold is the better option.) The CS gets a smattering of carbon fiber-reinforced plastic (CFRP) bits on its exterior too. There’s a front spoiler made out of the weave, a larger Gurney flap out back, and the trademark M roof. The hood is made of carbon fiber as well, though it’s body-color (an exclusive Misano Blue) instead of naked. This, plus a large vent in the middle, make it 50% lighter than the M4 Competition’s hood.

The M2 gets a new dual-branch exhaust system which BMW claims “enhances aesthetic and aural appeal.” The system includes two electronically-controlled flaps and the requisite M badging on the four tips.

M badging continues inside, with lightweight seats bearing the badge and its tri-color stripes along the headrests. Alcantara abounds, wrapping the steering wheel, which includes a red center-line at the 12 o’clock position. The soft-touch material covers most of the center console and a bit of the dash, complete with etched “CS” in front of the passenger, just in case they’ve forgotten what they’re in.

Not many people will get the opportunity to sit in the M2 CS when production begins in March 2020. Like the 2011 1-Series M Coupe, it will be in production for a single year, with BMW limiting the run to 2,200 units. European pricing starts at €95,000 — expect the North American sticker when the M2 CS makes its physical debut at the LA Auto Show November 20.