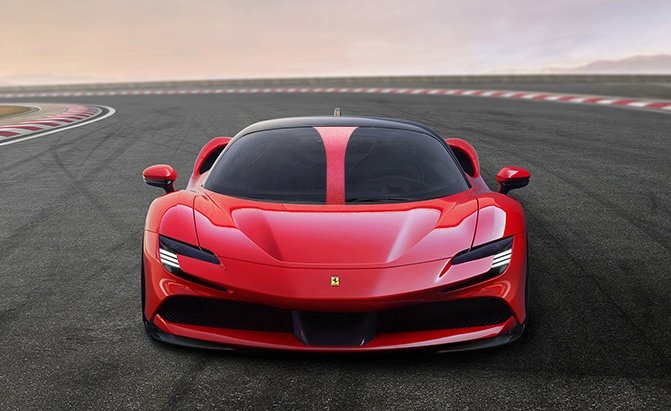 We’ve uncovered another Ferrari patent. It’s not a joystick this time, but it’s something similar to what we’ve seen in F1: a central pillar ahead of the cockpit.

Modern car design is at a crossroads. Safety regulations demand thicker and thicker A-pillars, but the bigger these get, the more they block the view out—making the car less safe. In a sports car this becomes even more of a structural concern: there’s more distance between the pillars, and they’re more horizontal than, say, the upright stalks on an SUV.

This patent, which Ferrari filed in June 2019, seeks to ease the load, literally. It proposes a central pillar, bisecting the car. This would increase passenger cell strength in the case of an accident, while also serving as a channel for air to enter the interior. The AC unit could even migrate behind the seats, taking advantage of the improved air flow.

There’s a major difference between this and the company cars Vettel and Leclerc run around in though. This pillar is wide—more so than A-pillars, in fact. The vast majority of road cars aren’t central-seaters, either. But Ferrari has a high-tech plan for that, with an exterior camera setup to project real-time footage onto the central pillar’s interior surface. The patent states this would align with the driver’s eye level. What’s more, it could just as easily apply to the two A-pillars as well. You could drive your Ferrari with—essentially—a completely unimpeded view out front.

The patent also suggests the same system replacing the rear-view mirror. We’ve already seen digital rear-views in action on road and track, so this part isn’t a stretch.

The central pillar patent states any sort of roof material would work with the design, including canvas. Yes, convertibles could use the design too. Perhaps more surprising is the mention of a 2+2 layout…

Lastly, the patent mentions a windshield wiper move to align vertically with this new central pillar. Ferrari states this would offer an aerodynamic benefit compared to the usual horizontal placement.

SEE ALSO: Ferrari SUV to Launch by 2022 at the Latest

Given the wide range of applications, this could proliferate across the lineup. An augmented reality approach to sports car driving? Sign us up.