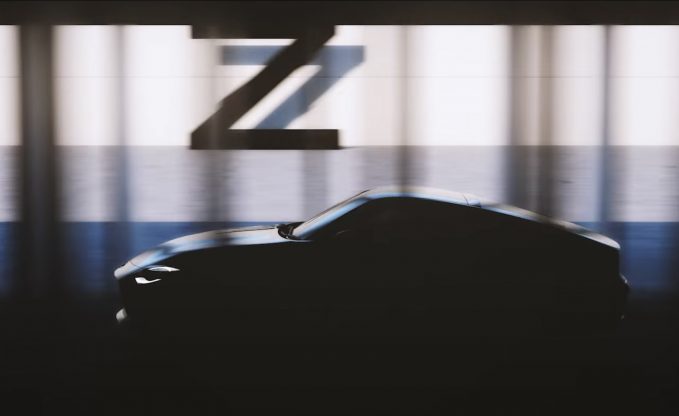 Nissan has finally officially teased the next-generation Z-car, likely to be called 400Z.

In a recent video labeled A to Z, Nissan teased the 12 new and updated models it will release in the next year. The last one teased among them was a sleek looking, retro-inspired coupe silhouette that we associate with the Z cars. Nissan has put rumors to rest as the video confirms that the 370Z will get a successor, which could be called the Nissan 400Z.

Honestly, it was about time too. The 370Z is over 12 years old and was practically begging for a replacement. From the short video we can gather that the successor will borrow its design cues more from the original 240Z–hence the retro logo–rather than the 370. The video also briefly showcased the nose that is low with an almost ground-hugging front grille, almost like on the original Shelby Cobra but quintessentially Japanese.

The long sweeping hood gives way to a sharply raked windscreen that transitions into a smooth coupe roofline. Smoothness seems to be the guiding feature of the design as the sloping roof seamlessly blends into the tail and its prominent haunches. The overall design, at least in silhouette looks like a smoother and more slippery version of the Toyota Supra, its chief rival.

Technical details remain elusive. But the 370Z successor will not be on a new platform, simply because it wouldn’t make sense from a business perspective. We can expect the new Nissan 400Z to share its platform and powertrain with the Infiniti Q60. It will likely make use of the same 3.0-liter turbocharged V6 that also powers the Infiniti. Also, the 400Z will likely remain a strict two-seater, which means it will not only be smaller but lighter—and thus faster—as well.

Expect Nissan to offer the new Z with both manual and automatic transmissions to appeal to both sides of the spectrum.

Deviating slightly, the video shows 12 vehicles that Nissan will launch in the next year to eighteen months but weirdly, it doesn’t show the GT-R. That can only indicate that there is no new GT-R on the horizon yet, despite it being even older than the 370.

But that is a discussion for another time, for now, the news of the 370 replacement will suffice. We can’t wait to know more.