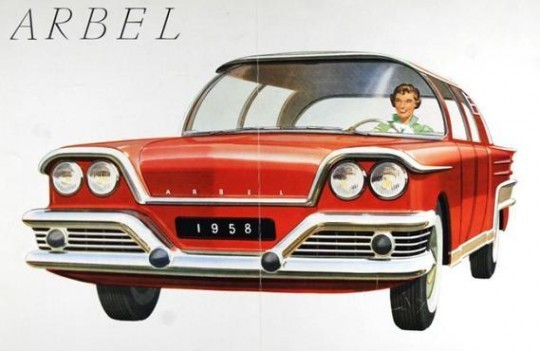 After the horrors of the Hiroshima and Nagasaki bombings slipped into oblivion and the destructive arsenal we’re still sitting on forgotten, humans began looking at ways to use nuclear power for various applications.

The first nuclear reactor, named Chicago Pile-1, achieved critical mass for the first time in 1942. In 1954, the Soviet city of Obninsk became the first human settlement partially powered by a nuclear reactor, followed in 1956 by the world’s first full-scale power station, in Calder Hall in England.

The military saw nuclear power not only as a means to defend or attack but also as a means to get around. The first nuclear-powered submarine, USS Nautilus, was commissioned in 1954. A multitude of ships, from cruisers to aircraft carriers, followed ever since.

Dreamers began seeing nuclear reactors getting stuck and powering pretty much everything. Despite the greater long-term danger, nuclear power was cleaner, and could potentially last forever. So it wasn’t long until car manufacturers began looking into the technology.

In the 1950s and 1960s, several still existing or now defunct carmakers tried to create on a scale or another early versions of nuclear-powered cars. ARBEL SYMETRIC

Somewhere in France, in the early 1950s, there was a car company called Compagnie Normande d'Etudes pour l'Application de Procédés Mécaniques. The long-named group was mostly in charge of creating vehicles to be used as experimental platforms.

Among their studies was the Arbel, a fiberglass bodied hybrid petrol-electric vehicle equipped with eight seats. The first generation of the model entered limited production in 1951, but it was only the 1958 variant of the car, shown at the Geneva Motor Show, that caught the eye.

Called Symetric, this version of the machine was to be powered by 40-KW nuclear thermal generator called genestatom. Should the French regulators had approved it, it would have used nuclear waste for fuel.

Ford’s Nucleon concept is perhaps the best-known nuclear car, even though it was never produced and only entered the real world as a 3/8 scale model.

Ford planned the concept as a research tool to be used by scientists as a means to research ways to downsize nuclear reactors and make them safe for civilian use.

The car was to have the reactor mounted at the rear and work pretty much as the USS Nautilus nuclear submarine, using a steam engine powered by uranium fission.

Ford said at the time of the concept’s presentation that the Nucleon would have a range of 5,000 miles (8,000 km). It’s unclear how they reached this conclusion given the fact that the reactor they envisioned did not exist.

Unlike the Symetric, when the Nucleon reached its range, no refueling was needed. One would simply have to swap the old reactor with a new one, and that was that. The replaceable reactor also meant various power outputs for various customer needs.

Currently, the scale model is to be found at the Henry Ford Museum in Dearborn, Michigan.SIMCA FULGUR

The French seem to have been quite keen on building nuclear-powered cars. At about the same time with the Symetric and Nucleon came into the spotlight at the 1959 Geneva Auto Show the Simca Fulgur.

Simca, a company created by Fiat in 1935, tried to show the world how cars would look in the year 2000. There are no specs available for it, apart from the fact that it should have been powered by atomic energy.

The car had some sort of driver assistance system, that could be controlled by voice commands. Assistance came in the form of an autopilot that took its information from a control tower somewhere. It was capable of using only two of its four wheels to balance itself.STUDEBAKER PACKARD ASTRAL

Of all the bunch, the Studebaker Packard Astral was perhaps the craziest atomic car concept. It was supposed to have only one wheel, which would be used to balance the vehicle using gyroscopes.

The car was unveiled at the South Bend Art Centre in 1958 as used what its creators described as an ionic engine. To shield the occupants from the radiation emitted by the engine is was to use a so-called curtain of energy. We refer to such a concept today as a force field.

All of the above cars were created in an age when humans dreamed to conquer the stars within decades. Great campaigns were created to describe this future. Neither this future nor nuclear-powered cars came to be.