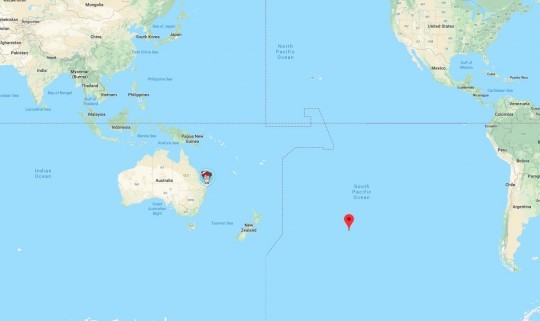 Not many people are aware that space stations, satellites, supply capsules and every conceivable piece of technology that was once in space is remotely stored somewhere in the Pacific Ocean, thousands of miles away from any land mass in any direction.

The reason for putting so much hardware to rest in such a remote location is simple: fear of deadly impact and/or contamination.

As you might guess, having several tons of metal fall onto a city is a pretty dumb idea. That’s why ever since the inception of the space program, the areas of choice for space debris to fall has been over water.

No one really knows what goes on in space in terms of contamination, so storing former orbit machinery inlandis just as dumb of an idea. A remote, water-based location had to be chosen for the task.POINT NEMO

Point Nemo is the not-so-scientific name given to the so called pole of inaccessibility. This point is a location on either land or sea that is the most difficult to reach due to its remote location. On Earth, there are several such Points Nemo.

The continents have such regions as well. Somewhere in South Dakota lies the North American Point Nemo. In South America that point is located in Brazil. For Eurasia, the furthest point from anything is in northwestern China, near the Kazakhstan border.

None of the above mentioned distant points were suited for sending space junk, since most of them are on land. Luckily, such a point lies right in the path of falling orbiting machinery, 2,688 km (1,670 miles) from the nearest land, smack down in the middle of the Pacific Ocean.ORBIT GRAVEYARD
Agencies that deal in space exploration have two ways of ridding themselves of decrepit pieces of hardware. Depending on various factors, satellites and space stations could be sent flying away from Earth or sent crashing back down to the planet from where they came from.

In case agencies choose to send satellites further into space, they are placed into a so-called graveyard orbit, 322 km (200 miles) away from the farthest active satellites. That means at an altitude of over 36,000 km (22,400 miles) above Earth.

Objects sent to that place would stay there for millennia to come, trapped in orbit. In all, estimates say there are currently over half a million trackable pieces of man-made space debris circling the Earth at 28,000 km/h (17,500 miles per hour) on various orbits. Nearly 180 million smaller, harder to detect debris are also out there.OCEAN GRAVEYARD

From time to time, agencies choose for one reason or another to de-orbit something. In most cases, the objects chosen for this task are small enough to be completely burned at re-entry, with nothing left to fall onto the ground. Such a practice was established sometime in 1993 to free up the lower orbits.

In some cases, object may prove to be to big to just vanish into thin air. When that is the case, rocket scientists try to send the object on a trajectory that would have it crash at Point Nemo in the Pacific. The operation requires a lot of precise mathematics, phisycs and other such sciences.

Estimates are that the area is how permanent home to over 300 pieces of space equipment. Submerged in the waters of the Pacific are a host of unmanned resupply spacecraft to the International Space Station, European and Japanese space agencies’ machines, and a myriad of other hardware.PEACE AT THE BOTTOM OF THE OCEAN
The star of the cemetery is however the world’s first real space station, Russian-built Mir. At the time of its de-orbiting, in 2001, it was the largest spacecraft ever to reenter the Earth's atmosphere, so a very careful, three-stage plan had to be executed to ensure it safely reaches the designated spot.

Mir ended up somewhere in the point of inaccessibility area, but debris from the space station fell on a 1,500 km (930 miles)-long area that followed its atmospheric trajectory.

To be noted is the fact that spacecraft stored in the so called spacecraft cemetary are not taken there after falling somewhere else, but they are made to crash in that area. There is no information available whether someone has really been there since the practice has been established.