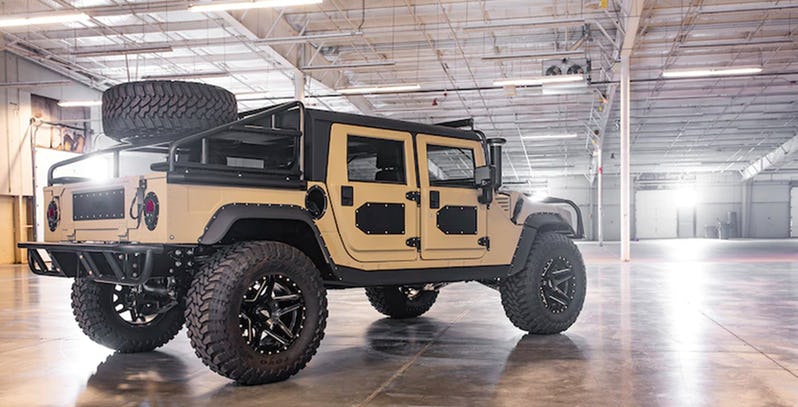 The legendary Hummer has made an encore with a revised format that modifies the boundaries of what a Hummer was ever intended to do; with a 500 hp turbo diesel and a touch of luxury, the Launch Edition Hummer from MSA (Mil-Spec Automotive) aims at more than just the rugged outdoorsman.

The argument of prominence is crushed by this MSA build as the H1’s repertoire is extended into a high-end market; for those willing to foot the quarter-million dollar price tag, a reward far beyond simple all-terrain luxury awaits them. Each H1 build is a custom outfit that MSA claims addresses the H1’s weaknesses while accentuating all the strong points, according to MotorTrend.

The factory HMMWV was transitioned into civilian service for the general public nearly two decades ago, but remained largely utilitarian with few amenities for anyone other than the most extreme rough-neck adventurers; the Launch Edition modifies the original platform to appeal much more heavily to a comfort-minded audience with a standard trim kit that contrasts the bare-metal interior of the battleground champion like night and day.

For those concerned with durability, outer refinements have been addressed as well. As far as the luxury aspect was taken with the Launch Edition Humvees, it pales in comparison to the exterior aesthetic updates MSA as applied to their H1. The aircraft-grade aluminum body is widened by seven inches to accommodate an eight-inch track widening with a custom suspension; a 12,000lb winch is remotely controlled behind a custom-fabricated brush guard to complete the front armor.

The main focus of any buyers concern is well-tended to as the powerplant received what could be called the most needed of updates to the H1 platform. The 6.6L turbo-diesel Duramax V-8 is tuned to 500hp and 1,000ft/lbs of torque which MSA paired to a heavy-duty Allison six-speed, allowing the previously-underpowered behemoth to sprint to 60mph from a standstill in around six seconds.

The list of upgrades is only beginning as custom spare tire racks and protective coatings adorn the perimeter of the H1, crowed by an LED light bar above the long, horizontal windshield. The H1 is an old platform by now, but MSA’s updates shoot it right up back into relevancy and at the front of the performance-luxury pack with more confidence than a Tesla Model X despite its oil-burning proclivity. Although we won’t see many of them around at over $220,000, the Launch Hummers you do see will be highly exclusive with less than 30 projected for 2018-2019 production.