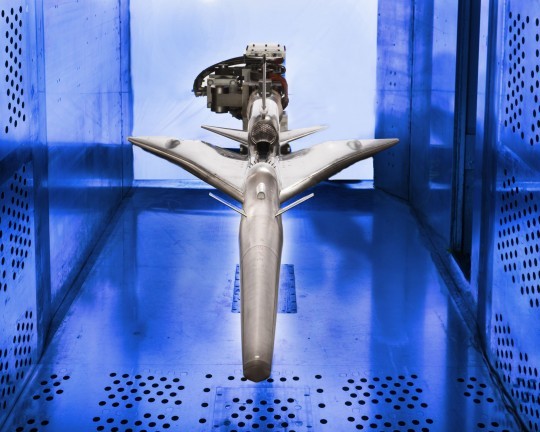 This is why fighter jets are not allowed to go supersonic above populated areas.The first supersonic flight of a human being took place on October 14, 1947, when U.S. Air Force Captain Chuck Yeager achieved Mach 1.06 in the Bell X-1 plane. The sonic boom he created was heard from 30 miles away (48 km).

As the U.S. started manufacturing supersonic planes, more and more sonic booms were beginning to be felt by the public. In just ten years, between 1950 and 1960, 40,000 claims against the Air Force had been filed by Americans who perceived the booms as very disturbing. That prompted the Federal Aviation Administration (FAA) to ban all overland supersonic commercial flights.

In 1969, the world's first and last supersonic passenger jet airliner made its maiden flight, entering service in 1976. It flew until 2003, under the banner of British Airways and Air France. It never, in its 27 years of service, went supersonic above land.What is QueSST X-Plane
The QueSST X-Plane, or the Quiet Supersonic Transport, is planned as a replacement for the Concorde, one that will not be hindered by the FAA restrictions. Being developed by the National Aeronautics and Space Administration (NASA) and the guys that brought us the SR-71 Blackbird, Lockheed Martin's Skunk Works, is meant as a way to “fly fast with low boom.”

A sonic boom is generated when an aircraft, passing through the air, creates a series of pressure waves in front and behind it. The waves in front move at the speed of sound and, as the speed of the airplane increases, are squashed together and have no means of getting out of each other's way.

They eventually merge into one wave, traveling at the speed of sound, and creating a rise in pressure at the nose of the plane, followed by a return to normal pressure when the airplane passes through the wave. The sound generated by an F-16 exceeding the speed of sound, for instance, may be more than 78 dB at over 8,000 meters altitude (26,200 feet).

According to Lockheed, the QueSST is designed to separate the shocks and expansions associated with supersonic flight and reduce the sonic boom to as much as 60 dB, the volume you get in your average conversation with a friend. By comparison, the Concorde was rated at 90 dB.

Despite being silent, the plane is supposed to fly at Mach 1.4, about 1,100 mph (1,770 km/h). That's twice the speed of today’s commercial airliners and close to the maximum speed achieved by the Concorde.

The design of the QueSST is, says Lockheed, “resembling the paper airplanes we let sail in our youth.” It features a long fuselage, a highly swept delta wing, and multiple control surfaces. The shape of the plane proved in wind-tunnel testing it can scatter multiple shock waves and minimize their cumulative effect.

The most significant problem faced by the engineers is the force of drag the wing design must overcome. According to NASA data, friction drag contributes to about half of the total drag at supersonic speeds. The fact that the plane uses a swept wing design may contribute to a lower sonic boom, but in turn creates crossflow, or air flow disturbances that run along the span of the wing. Crossflow increases friction and calls for higher fuel consumption.

The solution to this problem is the so-called laminar flow of air on the swept wing. To achieve this, NASA uses small Distributed Roughness Elements (DRE), along the leading edge of the wing. DREs create small disturbances that in turn make for a more laminar airflow.

NASA plans to go supersonic in its new airplane over inhabited areas, in an attempt to gather relevant information from civilians about the perceived noise level. It will do so in a scaled-down version of the plane,

Should the plane come into existence, it may herald a new era of air transportation. At the speeds announced by NASA, travel time between London and New York would be cut down to a little over three hours. A flight from New York to Hawaii (a better part of it overland, where currently no supersonic speeds are allowed) could be cut to 4.5 hours.

The first full test flight of the airplane is expected to take place in 2021.