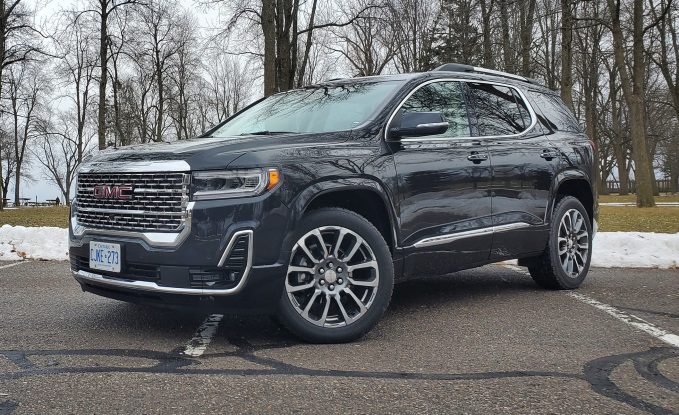 Sometimes I feel like GM’s truck and SUVs merely exist in the background. Just like ordinary scenery that you zoom past. Sure, you see a lot of GMCs on the road, but most seem like workhorses consigned to schlep tools and equipment around for landscapers and plumbers.

There’s nothing wrong with making and selling commercial vehicles from a revenue standpoint. And GMC makes some very appealing vehicles. But the brand seems to go unnoticed in the GM catalog mainly because its lineup exists almost unaltered under the Chevrolet brand. One such vehicle is the 2020 GMC Acadia, which was recently refreshed, and I’ve been driving it.

The current second-gen Acadia was introduced in early 2016 as a 2017 model. But unlike its predecessor, the new model was significantly smaller. GM shortened the Acadia by 7.0 inches and made it narrower by 4.0 inches. But basing it on the Cadillac XT5 and Blazer platform helped Acadia shed 700 lb over the previous generation model.

Like its predecessor, the second-gen Acadia launched with a 3.6-liter V6 (310 hp / 271 lb-ft) and a new entry-level 2.5-liter four-cylinder engine that produced 193 horsepower and 188 lb-ft of torque. Both engines were paired with a six-speed automatic transmission with either front or all-wheel drive.

Though the 2020 update classifies as a mid-cycle refresh, the changes run deeper than a new front end and some new color options.  Although, new colors are a part of the mix too.

You know it’s a new model at first glance thanks to the new, sharper LED headlights which are now standard. It also sports a new grille, front and rear fascias and GMC’s signature C-shaped lighting. On the powertrain front, a nine-speed automatic replaces the six-speed auto box. And a 2.0-liter turbocharged four-cylinder (230 hp / 258 lb-ft) now serves as the base engine for SLT and Denali models.

The Acadia range also expands to four with the introduction of the first-ever AT4 grad. It includes a unique grille, wheels, badging and black chrome exterior accents. The AT4 slots below the Denali and above the SLE and SLT trims.

Inside the cabin, the Acadia receives an Electronic Precision Shift unit that replaces the traditional gear shift lever for more storage space in the center console area. Other interior changes include an updated GMC infotainment system with new features and customization, a new heads-up display and a rear camera mirror.

More Luxe Than You Expect

My tester’s paint, carbon black metallic, added $495 with an engine block heater ($100) and wheel locks ($75) rounding out the subtotal before destination ($1,195), dealer fees and taxes.

Even without the extras, the Acadia Denali is a pretty luxurious vehicle. Standard kit includes 20-inch aluminum wheels and a heated and leather-wrapped steering wheel. The front leather seats are heated and ventilated. The second-row bucket seats get heating only. The infotainment display is an 8.0-inch unit and comes paired to a premium 8-speaker Bose audio system.

Overall, Acadia Denali’s cabin offers high comfort, with a pleasing mix of leather, plastics and wood accents. It conveys a sense of craftsmanship and refinement. And yet, there are a few cheap plastic inserts that eat into the overall experience and appeal of the cabin. There is more hard plastic below the steering wheel, on the glove box cover and lower door panels, but at least it’s mostly out of sight.

The Acadia Denali acquits itself well in everyday driving situations. The 3.6-liter V6 is smooth and responsive off the line, but also has enough power in reserve for easy passing on the highway. It’s a breeze to drive during daily commutes to the city as well. The nine-speed automatic shifts smoothly and keeps the engine operating mostly between 2,000 and 3,000 rpm. The ride is supple and reasonably quiet in regular driving conditions, and its handling feels secure. Basically, not much to complain about there.

There are five driving modes: 4×4, 2×4, sport, off-road and trailer tow (if equipped). I mostly drove around in 2WD mode as I had limited opportunities to test out the 4WD mode. A brief excursion, however, demonstrated that the Acadia’s 4WD system works rather well in low traction situations. The tester, however, came with winter tires which helped matters as well.

The ‘sport’ mode though was as you would expect from a car of its size. The difference in power delivery and throttle response was only marginally better. One other note about modes: when equipped with the trailer tow package, the Acadia Denali can tow up to 4,000 lb. As for fuel efficiency, given its performance capabilities, the Acadia Denail’s 22 mpg average fuel economy number (11.4 L/100 km) is impressive overall.

The updates the 2020 GMC Acadia Denali receives make an already good option even more compelling in a crowded SUV space. With seating for up to seven (depending on trim), along with the ability to tow up to 4,000 lb when properly equipped, and its loads of tech and smart design features, it wouldn’t be surprising to see the Acadia do even better business for GMC. And that’s saying something, considering it sold nearly 100,000 units in the U.S in 2019.

The Acadia Denali is far from an affordable vehicle especially since it starts from $49,495 with all-wheel drive. Check off a few boxes on the order form and you’re looking at a bill of well above $50,000. By comparison, the Blazer RS and Ford Edge ST start from $45,790 and $44,510, respectively. Despite the steep price, the GMC Acadia represents good value overall owing to the premium features and a cabin that feels upmarket, a few plastic bits notwithstanding. It is proof positive that GMC has a lot more to offer than just workhorses for business.