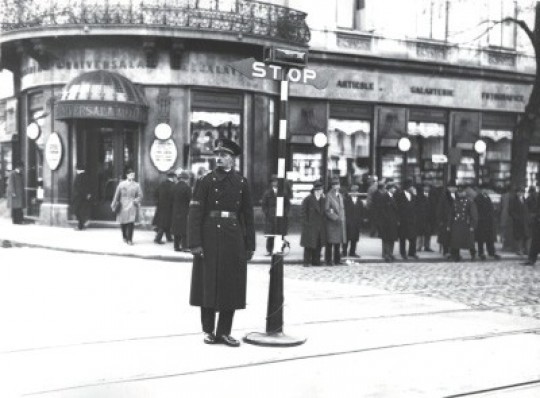 All fine and dandy, but there is one little aspect we haven't talked about as much. One in the absence of which cars would be reduced to simple pieces of furniture, or to extravagant works of art. An aspect which does not exist in physical form, but often has more drastic consequences on the life of a person than a solid, tangible object: traffic rules.

Often annoying, seemingly pointless, traffic rules have been the automobile's silent companion for the better part of its existence. We will not give you here a stiff, to the point presentation of what traffic rules are today, or in your country, or whatever. As with any field of human activity, what matters here is what came first: first rule, first sign, first ticket, first crash and, unfortunately, first fatality. FIRST TRAFFIC LEGISLATION
When you read this, you should have in mind what the people of the time (1800s) understood by the term "traffic": no asphalt, no cars, no traffic lights, no traffic signs, no street markings, no traffic police.

Why then the need to create legislation to cover… nothing then?

With the industrial revolution still making its presence noticed, railroads and more importantly fields began being flooded with traction-engined vehicles (aka road locomotives). To get from place to place, locomotives had to cross urban, populated ares and, despite the fact the were slow, noisy and impossible to miss, they posed quite a threat to the innocent bystanders. Or horses.

Scared by the prospects of a respectable citizen getting squashed, as well as by the prospects of hearing one of the damn things huffing and puffing in the quiet of the night, the British Parliament adopted what became know as the Locomotive on Highways Act, in 1861.

The provisions of the legislation seem somewhat hilarious now as some have lost their significance over time. A few, however, have formed the basis for today's traffic legislation.

The legislation, for instance, only stated that the vehicles' weight should be at most 12 tons and imposed a 10 mph (16kph) speed limit. No idea how they knew a vehicle is speeding…

In 1865, the act is revised and turned into the Locomotive Act (aka Red Flag Act). It required that a motorized vehicle, regardless of its purpose, be preceded by a man carrying a red flag when traveling on the highway – Brits use the highway term for any type of road, including streets and public footpaths.

Speed limits were reduced to 4 mph (6 kph) in non-urban areas and at 2 mph (3 kph) in cities (still no idea how they caught speeding vehicles "in the act"). But the most important addition was the requirement to use at least three people to operate a vehicle: one to drive, a stoker, and one carrying a red flag (hence, the name of the bill) and a lantern.

The one with the flag was used for two purposes: he slowed the vehicle down, as it was forced to drive at walking speed, and warned approaching pedestrians and horse riders of their presence. Of course, you need to have been blind and deaf to miss one on the street.

In 1896, the revised Locomotives on Highways Act (or the Emancipation Act ) eliminates the need for a three man crew, increases speed limits to 14 mph (22 kph) and, more importantly, establishes the light locomotives category or, as we know it today, the under 3 ton class.

To celebrate the legislation, its creator, Harry Lawson, set up the London to Brighton Run, now the longest-running auto event in the world. FIRST LICENSE PLATES
As the number of vehicles on the roads increased, so did the authorities' need to keep track of them and their owners. The first country to use them is reportedly France, which issued one in 1893. But the one that established an entire system for them was the Netherlands, responsible for the first nationwide licensing system. Called driving permit, the system used numbers.

In the US, New York is the first to require license plates (1901). They were not government issued, but created by the vehicles' owners. Two years later, Massachusetts issues the first US state-issued plates.FIRST DRIVER LICENSE
Whereas up until the 1900s just about every single piece of legislation imposed limits and requirements for the vehicles themselves, all will change starting 1904.

In the UK, the habit of having a license plate described above turns law in 1904, when the Motor Car Act is adopted.

For the first time, the term of reckless driving is introduced, also stating penalties for the guilty party. If the driver did not display the license plate of his car, he would also be guilty of an offense.

Fortunately, for the first time, a license to drive was required. Unfortunately, there was no exam to take and the license was obtained just by paying five shillings and completing a form…FIRST TRAFIC LIGHTS
Prior to the introduction of the mandatory, get it yourself driver's license, the Brits introduced the first traffic lights. Even if the first road signs came into existence in the city of Ur (Iraq) some 4,000 years BC, for obvious reasons the first traffic lights were not possible until the late 1800s.

Credited to be the first is a two-color (red and green) sign, installed outside the British Parliament. It did not use electricity to function, but rather gas, and needed to be switched manually. Reports say that, a month into service, the traffic light exploded… It was never recreated again.

The idea however was good, so it was revived in the US in 1912 by Lester Wire, the man considered the inventor of the electric red-green traffic light. The first one was installed in 1914 on the corner of East 105th Street and Euclid Avenue in Cleveland, Ohio. The three-color light came as a natural evolution in 1920, at the hands of William Potts.

Linking traffic lights together was first done in Salt Lake City, in 1917, when traffic in six intersections was controlled by a switch. Automated traffic lights surfaced in 1922, in Houston. Five years later, the country which started it all, Britain, got its first lights in Wolverhampton.

As we said above, traffic signs, in the general sense, have been around for millennia. True, they only came in the form of erected stone columns or road side rocks which marked various distances to important urban centers. But they only informed, and not guided the travelers.

The first road sign system in its modern sense is said to have been created in 1895 by the Italian Touring Club, but there is little known about its provisions. Only in 1909, nine European countries agreed to use the same signs to indicate road attributes like "bump", "curve", or "intersection." Work on a unified, complete system continues to this day, even if it has been around since the 1950s.

In the U.S., the adoption of the international system began in the 1960s. Until then, the US used its own sign system. RIGHT/LEFT SIDE OF ROAD
Have you ever wondered why is it most countries drive on the right side on the road, in the direction of travel, and others do it on the left? Why did the Brits get it all wrong?

Well, actually, the rest of the world got it all wrong. Historically speaking, at least. Some archaeological findings in England tend to suggest that the Romans used the left side of the road to travel. Why?

The main reason, as suggested by historian Northcote Parkinson, is the human physiology. With most humans being right-handed, it was easier for a horse rider to travel on the left side of the road. By doing so, he could easily fend off attackers, as well as reaching to shake hands with friends.

According to the same historians, just about everyone travelled on the left until the 1700s. In 1756, the first documented road use restriction stated that traffic on the London Bridge is to stay on the left side.

The rest of the world began switching sides in early 1800s, as freight wagons drivers found it easier to clear incoming wagons by using the right side of the road (because drivers were usually seated on the last horse on the left, so it was easier for them to estimate the distance if the other wagon passed closed to him).

Today, most countries use the right side of the road to travel, with only aboput 75 still sticking to left-hand drive.