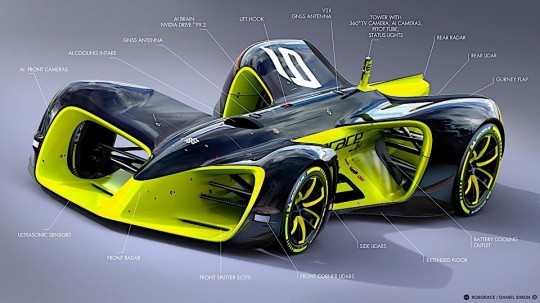 Four years into the series, electric racing in Formula E is proving more and more of a hit. For next year, BMW, Mercedes-Benz, and Porsche will be joining Audi, Renault, and Jaguar in the series. Some will be dumping racing efforts in other championships to be able to focus on Formula E, like Mercedes will be doing with DTM.

Exchanging combustion engines for electric motors and and batteries apparently worked. But what if the world had a racing series where electric cars would race against one another with no driver behind the wheel? Would autonomous electric racing stick just as well?THE IDEA
The thought of having cars with no drivers race one another popped into the head of Daniel Simon, the man behind vehicular designs in movies like Tron: Legacy, Oblivion or Captain America.

He envisioned what he calls Roborace as an extreme motorsport and entertainment platform for “the future of road relevant technologies.” In words we can all understand, a racing series meant for self-driving cars.

Just like in Formula E, all ten teams that are to take part in the series will field two examples of the same vehicle, and would compete on various city circuits in one-hour races. THE CAR

The car to be used in Roboracing will be called, of course, Robocar, and will be the same for all teams involved. Each of the team will have the right to develop its own algorithms and artificial intelligence systems aka future of work, that would give them an edge over the competition.

The Robocar has been designed by Simon himself and is 4.8 meters long and 2 meters wide. It has no cockpit, obviously, and weighs only 1,000 kg. Four electric motors spinning the wheels, each developing 300kW, and a battery pack good for 540kW would make up the heart of the car.

With this hardware and its 1,200 Nm of torque, the machine is supposed to be capable of reaching a top speed of 322 km/h.

The brain of the car, or the pilot, if you like, is a pair of Nvidia Drive PX2 artificial intelligence platforms. The two use 15 ultrasonic sensors, six cameras, five LIDAR and two radar systems to determine the car’s position and decide on the course to follow, whether to overtake and so on. BEFORE THE CAR
Robocar is nothing but a concept for the moment. To make it a reality, Simon is using a test mule called DevBot for making sure everything works properly. Unlike the Robocar, the DevBot is fitted with a cabin, allowing for a human driver to get behind the wheel of the car, if needed, and properly test it.

The most recent outing of the DevBot took place earlier in May on the street circuit of Formula E Rome. There the machine was pitted against pro-drifter Ryan Tuerck.

In the first run, Tuerck sat behind the wheel of the DevBot and drove it along the track. He then stepped out and the car was sent along the same route on its own, to determin whether the human or the AI was better. The winner of the race was of course the human, who managed to beat the autonomous system by 26 seconds on a lap. In racing, that’s huge.

Earlier in 2017, two DevBots raced each other ahead of the Buenos Aires ePrix. As if in a movie scenario, a dog entered the track and was successfully avoided by one of the cars, but the second one didn’t fare as well, crashing into a corner. Not because of the dog, of course.OUTLOOK

Initially, the first race in the Roborace series should have taken place during the 2016-2017 Formula E season. It didn’t. The exact date when it is to begin is not known.

Having self-driving cars race each other might not be as exciting for the spectators, but might prove gold for automakers. Most of those accepting to enter Formula E have made no secret of the fact that they use the series as a means to develop electric technologies for the production cars they make.

Since a host of carmakers in Formula E are also involved in creating autonomous vehicles, having a new way to test such technologies might draw some interest as well.